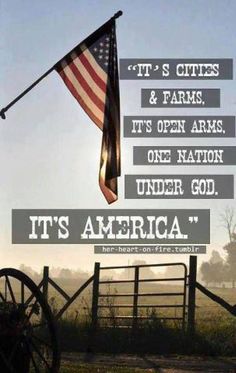 Unfortunately, the United States of America has been on the wrong course for a number of years. Our economy has suffered terribly in the first decade of the 21st century, we’ve seen a meteoric rise in entitlement spending that doesn’t seem to be doing anything to alleviate poverty, and taxes remain high at a time when we need to be encouraging and stimulating business rather than burdening it. And partially because of this rampant taxation (which, of course, doesn’t come close to raising enough money to pay off our overwhelming financial obligations), we are watching companies move overseas to countries that offer a more hospitable environment. That, of course, leads to crushing unemployment, which we make worse by leaving our borders wide open for illegal immigrants to enter this country and take what few jobs are available.

Fortunately, this is still America, and we have a precious opportunity to reverse this terrible course in the coming 2016 elections. Our vote in that contest will determine how we address the many, many problems facing our nations as we move into the future. It’s imperative that we make the right one.

Conservative, free market principles have consistently proven themselves to be the most effective at producing a strong, prospering economy. That’s why we need to lower taxes immediately, on both businesses and individuals, in order to create a fertile economic climate. But it can’t stop there. Many of our problems are the result of foreign nations deliberately using underhanded tactics such as the devaluation of their own currency to beat us in international trade. We have to punish these practices with import tariffs that target the nations responsible and level the playing field so that our products have an even chance to compete. And so that our workers can get the jobs offered by producing those goods, we need to shut the door on illegal immigration, once and for all. People who are here illegally must be found and humanely deported, and a border wall along with additional patrols used to prevent any more from coming in without proper documentation on oversight. It’s time to start actually enforcing immigration law in this country.

The net effect of all of this will be, as it has always been when conservatism has been allowed to shine, to strengthen our economy and bring jobs back to America. Doing this will also address the problem of runaway social entitlement programs, as people will be working and earning a decent living rather than relying on public handouts. When the economy gets better, a number of attendant issues are alleviated.

When we consider the condition of our nation in modern times, it’s easy to get discouraged. But discouragement is the first step toward giving up, and we can’t afford to do that. The battle for America is not lost, and if we stay determined, we can ensure that it never will be. The 2016 election may be one of the most important of our lives, and go a long way toward determining what kind of life we will leave for our children. We can’t afford to mess this up. We have to stand up for conservatism, for capitalism, and for America.

Can the GOP Win the Women's Vote?