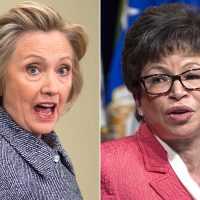 The Senior Advisor to President Barack Obama, and Assistant to the President for Public Engagement and Intergovernmental Affairs, is a woman named Valerie Jarrett. She is one of the President’s closest confidantes, and has been called his “right-hand woman”. She is also an Iranian born person of Muslim faith, two facts that by themselves are noteworthy but otherwise no great offenses. However, the complete picture of Valerie Jarrett becomes of great concern, and even alarm, when certain key facts about her are taken into account.

There are a number of things about Valerie Jarrett that are worrisome. In 1977, while delivering a speech at Stanford University, she was quoted as calling herself an American citizen who seeks “to help change America to be a more Islamic country.” She went on to say, “My faith guides me and I feel like it is going well in the transition of using freedom of religion in America against itself.” This is an extremely alarming and even subversive comment, delivered right around the time that Islamic terrorism was beginning to set its roots in the Middle East.

There is more. She is known to have ties to the terrorist William Ayers. Her father in law, one Vernon Jarrett, is an official member of the Communist party who is also an associate of Frank Marshall Davis, himself a Communist activist who played mentor to Barack Obama during the future president’s childhood. We have here an Iranian Muslim who has stated her intention to transform America into an Islamic country, her desire to use the nation’s freedom of religion as a weapon against it, and who has highly questionable associates with terrorist and Communist connections. It is bad enough that this woman has our President’s ear; what is even worse is that it seems to go beyond that. Despite being an appointee who was never elected by the American people, Valerie Jarrett appears to have real influence in the White House.

An insider in the Obama administration has confirmed that Jarrett supported trading five detained terrorists in a prisoner swap for a single US Army Sergeant (Bowe Bergdahl) who had deserted his post. She was against tough treatment of the Islamic regime of Iran, and she is personally offended by the term “Islamic Terrorism”. Sure enough, our President to this day has refused to even utter the words, committed America to a disastrous “deal” with Iran that gives the rogue nation almost everything it wants, and went ahead with the lopsided prisoner exchange. Incidentally, the Obama administration swore that the terrorists released posed no threat – there is virtually no evidence that this is actually true.

These facts raise a number of disturbing questions concerning our present administration. Much of Obama’s policies have been disturbingly sympathetic toward Islamic extremism, even as the danger from that movement has only become increasingly stark and imposing. He has spoken in favor of allowing vast numbers of Syrian refugees to flee their war-torn nation into the United States, despite the fact that they would be coming from a known ISIS stronghold and being welcome into the US with virtually no opportunity to check their backgrounds and intentions. Obama also wishes to close the terrorist detention camp at Guantanamo Bay, Cuba, leaving us severely hobbled in our ability to hold detainees captured on the battlefield. All of these positions are consistent with the feelings and opinions of Valerie Jarrett – is this the real reason Obama supports them?

Valerie Jarrett is, again, completely unelected. She has never even been confirmed by the US Senate for her position. She is a completely unaccountable woman with childhood ties to Barack Obama – just how much control does she have over our President?