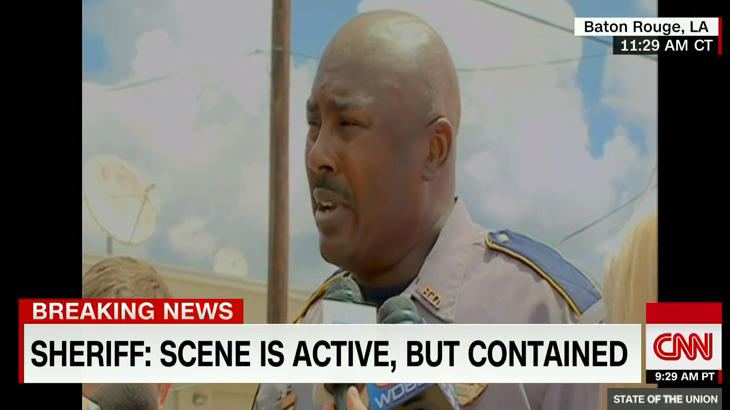 The dead suspect in the Baton Rouge shooting was wearing all black and was wearing a mask, Baton Rouge Police Department Sgt. Don Coppola said. Coppola said he did not know what the mask looked like, but that it was “some type of mask to conceal (the shooter’s) identity.”

— One suspect is dead, and two others may be at large
— Police are looking for anyone wearing army fatigues, all black or possibly a mask

In a city already tense after a high-profile police shooting of an African-American man, three Baton Rouge police officers were killed and three others wounded Sunday. Officials think the attack on the officers is the work of multiple gunmen.

Police received a call of a “suspicious person walking down Airline Highway with an assault rifle,” a source with knowledge of the investigation told CNN. When police arrived, the shooting began.
One of the suspects is dead. Authorities believe two others may be at large.

Investigators are reviewing a video of the Baton Rouge firefight posted to social media to see who might have been involved, a law enforcement source with knowledge of the investigation told CNN’s Pamela Brown. The video has since been taken down.

The firefight took place in a part of town that the source described as rough. The area is a known drug trafficking area. It is a location where police often go to grab coffee.

The law enforcement official described the situation in Baton Rouge as a powder keg.

“There was no talking, just shooting,” McKneely said.

By noon, authorities had secured the scene and were making sure there weren’t any explosives left behind.

“After that, we’re going to gather as much information as we can and work this case as best as we can to find all individuals that were involved in this,” McKneely said.

“Somebody might have seen something suspicious, may know of guys plotting to do this. That’s why we’re reaching out to the community.”

Since the shooting death of Alton Sterling by Baton Rouge police earlier this month, the department has worried about credible threats against officers.

It has been an emotionally charged few days across the country because of the protests stemming from the Sterling shooting and the shooting by police of Philando Castile in Minnesota, plus the ambush on Dallas police officers on July 7 in which a sniper killed five officers.

“This is an unspeakable and unjustified attack on all of us at a time when we need unity and healing,” Louisiana Gov. John Bel Edwards said.