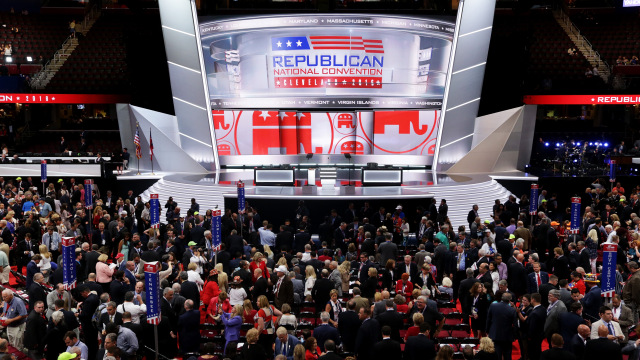 Cleveland, OH. — Chaos broke out on the floor on the opening day of the Republican National Convention as #NeverTrump attempted to force a recorded roll call vote on the adoption of the convention rules.

“Roll call vote!” erupted from the supporters for about ten minutes, followed by loud shouts of “call the roll, call the roll.” The last ditch effort to deny GOP presumptive nominee Donald Trump unfolded into a dramatic scene as the rebel group of delegates sought to have delegates unbound to vote their consciences.

Taken back by the pandemonium, delegate operatives for Donald Trump led chants of “Trump, Trump, Trump!” and “USA!”

The disruption began when convention’s chair, Arkansas GOP Rep. Steve Womack announced that a set of proposed rules was approved on a voice vote. This led to amid of boos and cheers in which Womack left the stage. Earlier, the opposition group submitted to the convention secretary a majority of signatures sufficient from nine states are needed for the recorded vote to occur. The nine states are: Colorado, Iowa, Maine, Minnesota, Wyoming, Utah, Virginia, Washington and Washington, D.C. A majority of delegates from seven delegations are required to force a floor vote.

The submission of the signatures led to Trump campaign and the RNC staff members working the floor to convince delegates to flip their support for the roll call petition.

Returning back to the stage, Womack informed the floor that three of the nine states had withdrawn support, falling short of the threshold needed to force a roll-call vote. According to a source, Iowa and Minnesota had withdrawn their support.

“The secretary received a request for a total of nine states requesting a roll call vote on adoption of the report on the committee on rules,” Womack said. “Subsequently, the secretary received withdraws which caused three states to fall below the threshold required under the rule. Accordingly, the chair has found insufficient support for the request for a record vote.”

The convention moved to approve the party’s official platform.

“I have never seen anything like this,” Senator Mike Lee, who is also a Utah delegate said. “There is no precedent for this.”