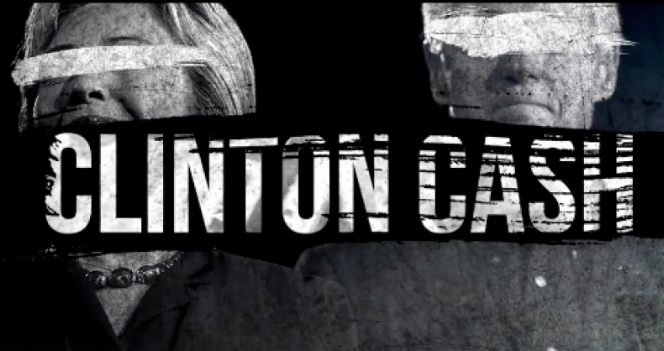 Pay-to-Play – a practice in which a politician encourages monetary contributions in exchange for benefits for an individual or company. Paying to play may involve outright bribery, but it usually refers to more subtle payments. For example, an insurance company may make large contributions to a politician re-election war chest and the politician may then be inclined to vote in the insurance company’s interest. Paying to play is often in a legal gray area.

After reviewing the 60-minute film adaption of Peter Schweizer’s New York’s Times 2015 bestseller book, Clinton Cash: The Untold Story of How and Why Foreign Governments and Businesses Helped Make Bill and Hillary Rich, I had to remind myself this documentary was not about a foreign oligarch engaging in pay-to-play, but about America’s former secretary of state now running for president of the United States, bartering the welfare of our nation for personal enrichment.

Schweizer narrates the film highlighting his book’s extensively researched rise of Clintons’ accumulation of massive wealth during Hillary Clinton’s term as Sec. of State. Using causal reasoning, Schweizer links patterns of timing between financial transactions to the personal profiting of the Clintons and The Clinton Global Foundation (CGF). Questionable national policy decisions benefiting donors with contracts, coinciding with donations to CGF as well as escalating speaking fees for Bill Clinton raises a blazing red flag flying over our national interest.

The documentary reveals how a variety of partnerships from the public and private sectors of the Clintons’ CGF were granted access to lucrative natural resources in foreign countries. Clinton bartered for businesses by using praise-for-play, assigning legitimacy to the very dictatorships known for human rights violations thereby propping up the oligarchs who were enriching themselves and their cohorts while raping their nations.

Haiti’s earthquake crisis was the most heartbreaking and catastrophic example of the Clintons’ practice. A Clinton operation from the start, he navigated a nation’s disaster into projects that benefited those in his sphere of influence. Bad decisions were made for the Haitians while putting money in his partnerships’ pockets.

In January of 2010, Haiti was struck by a massive earthquake. In a matter of seconds 250,000 people died. The south of Haiti had a large segment of its infrastructure crumble. The economy was decimated. $39 billion was committed from international relief organizations in donations from around the world.

President Obama asked former Presidents Bill Clinton and George W. Bush (the latter not mentioned in the film) to assist the Haitian people in rebuilding their own country. Bill Clinton had already been appointed by the U.N. to oversee post-quake aid to Haiti. However, rather than including the Haitian officials who wanted their roads and buildings rebuilt, Clinton and his associates took control. In one instance a contractor’s initial bid was to build 15,000 houses for an estimated cost at $53 million; the project ended with 2,600 houses built, costing more than $90 million.

A couple of other striking examples of Clintons’ pay-to-play matrix cited by Schweizer include:

Under Hillary, the state department was to oversee the environmental and economic impact on the nation. Precisely at that time Bill Clinton was offered a series of speaking engagements by a Canadian company, TD Bank Investment Crew, one of the largest share holders in the XL Keystone pipeline, to give ten speeches amounting to nearly $2 million. Three months later Sec. of State Hillary Clinton released an environmental impact statement that largely supported the pipeline. The environmentalists who assumed her support would favor their cause were stunned.

Following the public event, Clinton, Guistra and Nazarbayev have dinner. Two days later, Guistra gets his uranium mining concession in Kazakhstan. A couple weeks after that, CGF gets $30 million from Guistra, the first of numerous contributions that accumulate to more than a $100 million dollars in pledges and commitments from him.

The screenplay is well written with the content tightly crafted to persuade the viewer that when you follow the money it leads to the reasonable conclusion that both Clintons are void of ethical and moral compasses; that they barter contracts, use meet-ups, and are consistently void of conscience in the pay-to-play context.

The movie initially oscillates between Schweizer, a proficient speaker and narrator, and allegorical clips denoting the law of the jungle that represents a system unregulated by the laws of ethics or society. Maps with pictures of the players and a strand of yarn connecting Clintons’ pay-to-play network is interspersed with blood money images reinforcing the meta-message that America’s been sold out.

The documentary will be available for free global consumption this weekend prior to the Democrat convention on Breitbart News website, starting Saturday. On Sunday, viewers will have an opportunity to have questions answered with live commentary by author Peter Schweitzer and Stephen K. Bannon, writer and producer, on Breitbart News’s Sirius XM show, Patriot 125 channel. Other distribution partners will be announced at a later date.

Expect more left leaning media attempts to discredit Schweizer’s investigation like the one by ABC’s George Stephanopoulos who while interviewing him insisted upon “evidence” – a “smoking gun”, to which Schweizer answered, “The pattern is the evidence.”

Do All Lives Matter or Do Some Matter More?