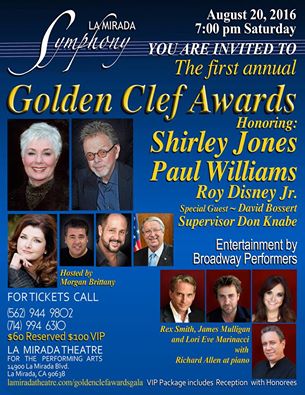 Please join Morgan Brittany as she emcees the first annual Golden Clef Awards honoring Hollywood icons Shirley Jones (“The Partridge Family”, “Carousel” and much more); singer/songwriter Paul Williams, who wrote almost every song you can think of from the 1970’s-80’s including ‘Just An Old Fashioned Love Song’, ‘You & Me Against the World’, Kermit’s ‘It’s Not Easy Going Green’, and Roy Disney Junior.

And if you’re not familiar with Morgan as anything other than a “PolitiChick” (bless your heart), she began her career as a child star in two Alfred Hitchcock movies (The Birds and Marney). Morgan has worked with almost every Hollywood legend you can think of, including Lucille Ball, Henry Fonda, Natalie Wood, Gene Kelly, and everyone in between. She was in several Twilight Zone episodes and was Opie Taylor’s first girlfriend on the Andy Griffith Show. Later Morgan starred in many dozens of television shows and movies including playing Vivien Leigh several times, Gunsmoke, Fantasy Island, Love Boat, The Dukes of Hazzard (where she met her stuntman husband of 35 years Jack Gill), and of course she played ‘Katherine Wentworth” on the original tv series ‘Dallas’.

This is a wonderful opportunity for Hollywood to not only honor some of it’s best performers but also to bring Morgan Brittany back into the Hollywood community she helped build.

And on a personal note, GO Morgan!