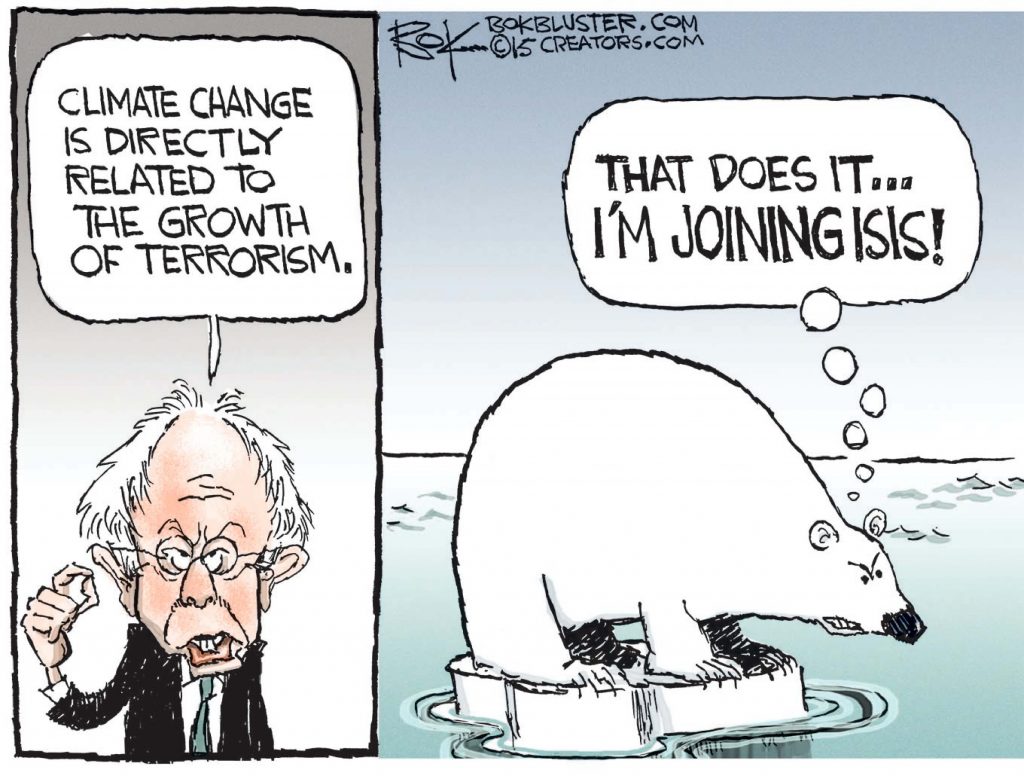 In late June, an agreement was reached between the United States, Mexico, and Canada aimed at addressing the issue of climate change. The pledge calls for cutting greenhouse gas emissions from oil and related industries, along with the implementation of cross-border energy transmission systems and development of clean energy sources. Ironically, part of the inspiration for the deal was a desire to strengthen cooperation between the North American nations after an important US-Canadian energy project, the Keystone XL oil pipeline, was rejected by American President Barack Obama – a move that weakened American energy independence and had an as-yet unforeseen impact on domestic jobs.

This agreement is the latest in a series of environmentalist paranoia regarding climate change and human industrial activity in general. The people behind it labor under the delusion that cutting emissions of carbon dioxide is clearly more important than addressing the national security threat posed by Islamic terror, growing our economy, and other crucial concerns. They also suffer from the curious shared hallucination that North America is a planet, rather than one among six inhabited continents.

Now California has introduced the first bill of its kind, allowing for the prosecution of climate change opposition–basically making it illegal to engage in climate-change dissent. The bill 1161, California Climate Science Truth and Accountability Act of 2016, is essentially, another assault on businesses and organizations that possibly could directly or indirectly engage in “unfair competition with respect to scientific evidence regarding the existence, extent, or current or future impacts of anthropogenic induced climate change,” the State Senate Rules Committee’s. This gobbledygook clears the way for litigations against fossil-fuel companies, think-tanks and others that have “deceived or misled” the public on the risks of climate change.  I see this as a prophecy for a California “Animal Farm”  the State has degenerated into totalitarian government.

Even if the US, Canada, and Mexico cut their greenhouse gas emissions drastically overnight – which no one is even proposing, in favor of more gradual reductions – its net effect on global human emissions would be negligible. There might even be negative reduction – emissions growth. That’s because developing economies with many times the population of North America, such as India and China, are aggressively industrializing and have shown no interest in hobbling their own growth in service to Western environmental concerns. Effectively, we can’t do anything to cut the amount of carbon dioxide that humanity pumps into the air.

What we can do, unfortunately, is cripple the American economy at precisely the time it needs to be picking up steam. We have real international trade pressures coming from the aforementioned foreign powers – India and China – and we need to focus on being competitive with them. We also need to focus on maintaining the capacity for a strong, impregnable national defense. In a world of Islamic terrorism, to do any less is downright suicidal.

If these people really are so worried about the environment – a noble concern, so long as it is not placed above national security – then what they should really be pushing for is intelligent implementation of clean energy. Then it has to be done right, and it can’t come at the cost of throwing away our oil and gas industries overnight. The correct way to approach this challenge is to allow the free market to lead us into the future. We accomplish this by incentivizing clean energy development and deployment, offering tax credits to companies that do this work. As money flows into energy sources like wind and solar – naturally, not because the government mandates it – the market for dirtier sources will gradually diminish, giving businesses and workers in those industries needed time to retool and adjust to a changing energy economy. We can do this, but we must do it the right way – the capitalist way.

The most important effect of this strategy is that it preserves and even adds jobs in important industries, rather than sacrificing them on the altar of environmental awareness as punitive emissions caps against oil and gas do. We need to be looking at ways to strengthen and grow out economy while simultaneously addressing environmental issues, not throw one concern away in our need to worship the other. This is why the actions of the environmentalist left are irresponsible – not because it isn’t important to preserve and improve our environment, but because they’re going about it wrongly – and very dangerously.