I confess I was spoiled by the first national convention I attended, not as a delegate, but as a guest. It was the 1968 National Republican Convention in Miami at the Jackie Gleason Civic Center. This was where they filmed Gleason’s reboot of The Honeymooners. Instead of comedy we had high drama. I was there with my wife Carolyn, our two small children and my mother.

Though vote counters had Richard Nixon well ahead there were workers all over the city pushing for either Nelson Rockefeller or Ronald Reagan. There was quite a contrast between the attitude of Rocky supporters and Dick Nixon’s.

We saw signs announcing “Rocky Can Win” which contrasted with the more confident ones proclaiming “Nixon Will Win.” Reagan supporters handed our free paperbacks with a bio of the California governor, one of which I was lucky to get him to personally autograph for me a decade later.

The big drama was over who would be chosen to be Vice President as the convention was barely a day old when for all practical purposes both Rockefeller and Reagan were out of it. Ronnie Reagan himself sat proudly in the front row of the California delegation wearing a button proclaiming “Nixon’s The One.” The betting odds favored Senator Charles Percy of Illinois and Mayor John Lindsay of New York. Lindsay had well planned his appearance as when he entered the convention music played and a spotlight aimed at his head giving a halo effect. At least eight potential candidates were shocked when Governor Spiro Agnew of Maryland was the choice for Veep.

A BAD TIME FOR A BATHROOM BREAK

We had celebrities attend and the biggest remains the most remembered to this day, John Wayne. The Duke gave a most patriotic speech that brought the house down. Only one problem for us. My mom, Ann Eichelman, loved and adored John Wayne. However his coming in had not been announced and she was on a bathroom break. Something she would never forgive herself for.

I remember well enjoying the event which had color and glamour for those inside, but not outside. I had been asked by our local weekly Salem, Virginia newspaper to write a report for them which entitled me to a press pass. I used it only once to go into a large press room and there I found a large number of reporters from all over the nation drinking and enjoying themselves. There were three big TV screens for the major networks so why did they need to be out in the convention hall when they could just follow what the news anchors dwelt on. 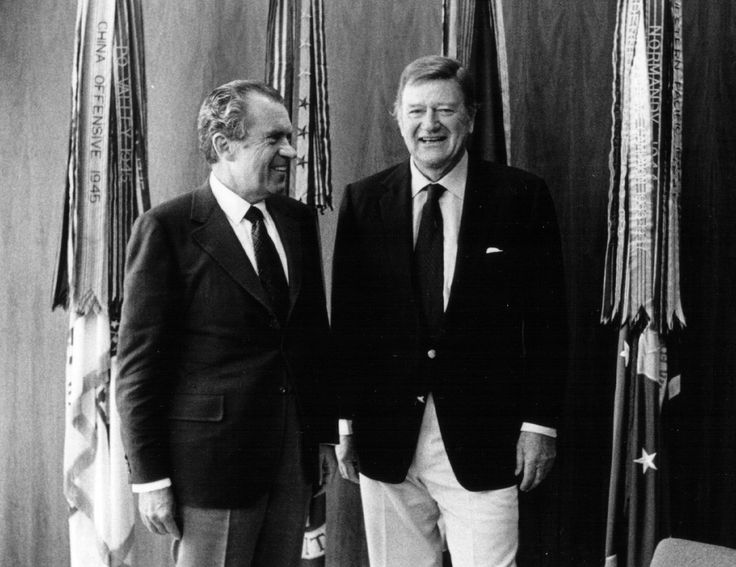 Now if the press wanted action they got it a couple weeks later in Chicago when the Democratic Party had one of the most chaotic gatherings in their history up to that point. Riots and protests and car burnings made the big headlines. The issue was race and the war in Vietnam. By contrast the Republican Party seemed like the one possessing real leadership.

In looking back I am amazed at the collection of great Republican leaders we saw, governors, senators, congressmen who all either had outstanding records or who would in the following years. What stands out most was the calm way the future president, Richard Nixon, handled the event.

Yes, I was and remain a supporter of Richard Nixon whose record of accomplishment is finally being recognized. Of course Watergate was something that never should have happened, but compared to the disregard President Obama and Secretary Clinton have had for the United States Constitution, for things they have done that at one time would have had them put them in jail, Watergate was chicken feed. Mickey Mouse.

Having eighteen minutes of tape disappear is hardly as serious as 60,000 emails. Or as my mom would say, “missing John Wayne for a bathroom break.”