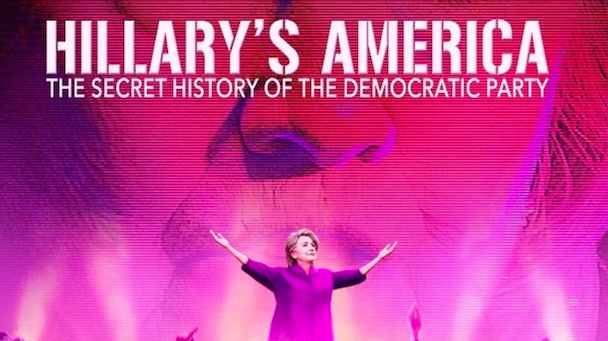 I was completely blown away.

In a speech before his film began, Dinesh described it as a horror film.  He is so not kidding.

I’ve seen all of D’Souza’s other films and while they were terrific, none can match the brilliance of this one. In every way. The production, including graphics, were outstanding, and the soundtrack – seriously, I would see it again for the music alone!  It was phenomenal. D’Souza’s wife’s singing of “God Bless America” was beyond spectacular.  And the Gatlin Brothers wrote and performed a song just for this movie.

But the movie itself, from start to finish, and the story it told, is something everyone – EVERYONE – should see. Everyone. Those on the right of course, but also I challenge anyone on the left to tell me what he got wrong. Because, to me, what Dinesh did, as he always does, was TELL THE TRUTH, a truth that the left has so cunningly subverted and distorted.

And let me tell you this: Dinesh is one of the gutsiest people out there. The making of this film, considering the (literal) punishment he received for “Obama’s America”, took such extraordinary courage it’s hard to fathom. And that it took such courage is a sign of how far we have fallen, that D’Souza spent a moment in jail when the criminal Hillary seems unindictable … it boggles the mind.

Other attendees of the premier were equally impressed.

Everyone must see this film. There are so many things that I DID NOT know about the evils of the Democrat party. it is amazing how history is so manipulated when one party has an agenda and takes control of the media. Unbelievable. This film will arm you with everything that you need to know to counteract what the left says and honestly I don’t know how they will be able to deny the cold hard facts that in it!

Singer/actress Chele Stanton said, “Everyone should see this film… So informative and eye opening in many ways…”

PolitiChicks CEO/Publisher Ann-Marie Murrell said, “This premier was attended by most of the major political wonks in Southern California and yet over and over, I heard people saying they learned something new about the history of the Democrat Party.  This is absolutely the must-see film of the year.”

Dinesh D’Souza is a courageous and brilliant truth-teller and it’s up to all of US to ensure that people see it.

The film will be released nationwide on July 22nd, right in between the 2 conventions.

Dinesh did the hard work – all we have to do is go see his movie, at least once or twice, and bring a friend. Buy someone a ticket–or better yet, buy a group of tickets and bring as many millennial as you can find!  The numbers on opening weekend determine what happens next, so again, please go see it.

You will be blown away–and even more convinced of the danger of this woman.

She MUST be stopped.

Hillary’s America, the latest film from the creators of America: Imagine The World Without Her and 2016: Obama’s America takes audiences on a gripping journey into the secret history of the Democratic Party and the contentious rise of presidential candidate Hillary Clinton.

In Hillary’s America, New York Times #1 best-selling author and celebrated filmmaker Dinesh D’Souza reveals the sordid truth about Hillary and the secret history of the Democratic Party. This eye-opening film sheds light on the Democrats’ transition from pro-slavery to pro-enslavement; how Hillary Clinton’s political mentor was, literally, a cold-blooded gangster; and how the Clintons and other Democrats see foreign policy not in terms of national interest, but in terms of personal profit.

Hillary’s America will uncover how their plan is to simply steal America.

Dr. Karen Siegemund founded the activist organization Rage Against the Media, in order to fight against the corrupt, dishonest and depraved media and to advocate for honest, objective reporting that a self-governing nation requires. A mother of two, an educator and a scientist, she has degrees in Applied Mathematics, International Relations and a doctorate in Education and American Culture. The common thread among these is the finding and disseminating the truth, and Rage Against the Media is committed to this same goal.