Recently, my husband and I took a mini-vacation – a rare one without our children– to hot, sunny, and beautiful Cancun, Mexico. It was a much-needed respite to refresh our spirits and recharge our batteries from frazzled commutes, busy phones and endless day-to-day mundane tasks, we were looking forward to the chance to relax and rejuvenate amongst the picturesque town and amenities of our beachfront resort.

We found ourselves taking in all of the sites, restaurants, and shopping that the Cancun tourist bubble had to offer.  But we also had the tacit realization that we were fully insulated from the realities of the world outside of the immediate resort – the poverty, drugs, and other urban ills shielded from the glitzy hotels and resorts populating the “hotel zone” area in which we stayed. Our biggest “problems” were relatively minor – dealing with the pesky timeshare-salesman who descended upon us like a vulture once we arrived in Cancun and the mildly annoying staff making pitches for everything from parasailing to jet-skiing to swimming with dolphins – all of which could be waved off or ignored simply by walking away.

But there was one moment in which we just could not walk past without notice.

We spent a day on a wonderful tour in which we explored the Mayan ruins at Chichen Itza. On route back we were scheduled to stop at the historic town of Valladolid, approximately 100 miles from Cancun, for a late lunch and for a bit of sightseeing. Among the sites that we explored in the charming colonial town was a church from the 1500s – later demolished and rebuilt in the 1700s – and a famous swimming hole called the Cenote Agua Dulce. We bought a small gift for one of our children from one of several Mayan women, for whom this was clearly their livelihood as they said “aduydame por favor” (translation: help me please!) as they hawked their wares.

Outside of the freshwater pool was another merchant area where my husband and I noticed a large group of children whose parents were likely the owners of these businesses–but one little girl particularly stood out for my husband and me.  The child, no more than age five or six, was standing near a wall by herself,  either singing or speaking softly to herself.  When we looked closer we noticed her tattered, dirty clothing and sad eyes and it was clear that she was neurologically impaired in some way, seeing her struggle to maintain her balance and her arms waving up and down. Our hearts broke for her – where was her mother or father, or any siblings, we wondered? 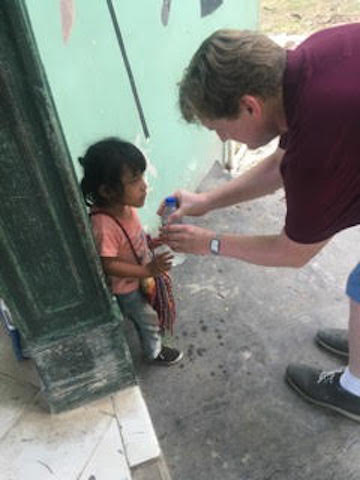 We asked our tour guide about her and were told that the little girl was most likely from one of the poorest states of Mexico (Chiapas).  He speculated that her mother may have given birth while addicted to either drugs or alcohol. We weren’t certain, but our non-medical opinion was that this little girl suffered from severe neurological and possible fetal alcohol syndrome issues.

What could we do? We were just a couple of tourists visiting from America, about to hop on an air-conditioned bus back to our resort filled with every luxury amenity one could desire. So we took matters in our own hands, albeit on the smallest level.  My husband gave her a cold bottle of water to which she acknowledged with a little smile. Then he handed her a few pesos and gave her a little pat before heading back to the bus. We wished we could have done so much more, but hoped our small act of kindness at least made her day a little brighter.

About a week after returning, I was driving my kids to their summer day camp – a necessity for a working momma like myself.  I found myself getting increasingly annoyed with their whiny, “1st-World“problems and rude attitude–so I let them have it.

“Do you realize what your father and I saw in Mexico?” I told them.  “Women who were pleading, ‘help me, please!’ They were begging people to help them LIVE.  They were struggling to sell items for their day-to-day-survival, just to pay for basic necessities! Do you have ANY idea how good you have it?”

I told them about the little girl and my feeling of hopelessness, having to leave her there yet wishing we could do more–get her out of that environment and bring her into our family.   Sadly, that is a lot easier said than done. I explained to my children how blessed they were to live in a First World nation like ours– the best country in the world – where they want for nothing.  I reminded them that they are fortunate to have what they have and dammit, be grateful for once.

By the time we arrived at their day camp I sobbed and sobbed for the little girl. The silence in the car was palpable, and I hoped that my message got across to them as they exited the van and went to their camp.

No parent ever wants their children to feel guilty for all the wonderful things they have in life, but we do want them to be grateful for what they have and to remember thank God every day for their blessings.  And sometimes we also need to remind them to show kindness, compassion, and empathy every chance that they get–even if it’s just taking time to show someone, even a stranger, that you care about them.