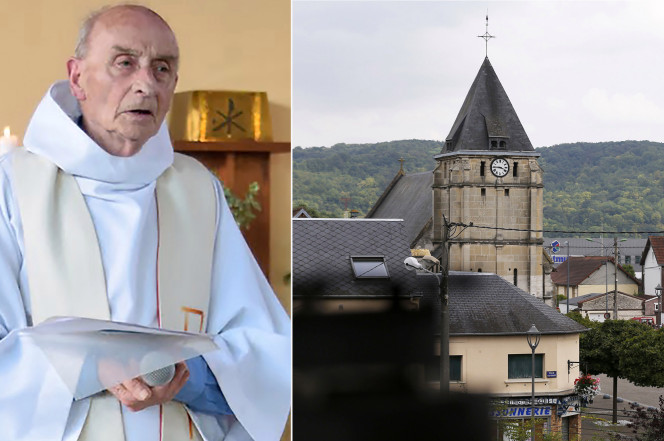 The world will start to become desensitized to what is beginning to look like a siege by the Islamic State, commonly known as ISIS, on the citizens of France.   Tuesday’s Jihad attack at the Catholic Church of St Etienne-du-Rouvray, Rouen, Normandy, came as France was recovering from the Bastille Day attack in Nice that killed 84 people.

The Islamic attack okilled Father Jacques Hamel, age 84; his assailants were French nationals, second generation French Arabs. Unquestionably, the small town in the Normandy region is riveting from this Jihad attack that took five people hostage, and slit the throat of their beloved priest.

Since the Charlie Hebdo terrorist attack in Paris, January 2015, there was the series of coordinated terrorist attacks that occurred in the city’s northern suburb, Saint Denis that killed 130 and most recently the Bastille Day attack on July 14 2016.

The France 24, International News, is reporting that French intelligence has more than 20,000 radical subjects on a Watch list, 12,000 of whom are deemed Jihadists making it virtually impossible to monitor them or to secure churches in France.

Nidra Poller, French-American journalist living in Paris has provided the following analysis: “As Jihad attacks strike quick and fast, the otherwise ineffectual French government is at least supplying ample information in record time regarding this latest attack to its citizens.”

Poller goes on to say, “The church is in a quiet working class neighborhood that stands next to a quiet diversity neighborhood. One of the killers is identified as coming from that troubled neighborhood.”

What is sending French society into a spin: The killer from the aforementioned tough neighborhood tried to join the Islamic State; he only made it as far as Turkey. The Turkish authorities sent him back to France where he spent a brief couple of weeks in jail before being released with an electronic bracelet. Presumably, he was wearing the electronic bracelet when he slit the priest’s throat, as reported to this writer today by Nidra Poller.

He was 19-year old Adel Kermiche whose mother asserts that the Charlie Hebdo attack was like a “detonator” for her son. He was quickly radicalized and motivated to join the Islamic State. His mother said her son became “bewitched.”

The Attack Could Have Been Prevented

The police should have had at least one of the terrorists on the terrorist watch list as he was arrested and sent to prison for his attempt to join the Islamic State. It is being reported that his computer contained the list of churches targeted for attacks, including the one he attacked today. However, under the terms of his release, he was allowed to walk freely as he wanted in the morning hours.

Why Would The French be So Willfully Incompetent?

It may be that they are willfully blind to the threat or that they are overwhelmed by the threat. Authorities in Nice were forewarned of terrorism yet precautions were not in place sufficient enough to thwart the Nice Promenade attack.

The Caliphate is rising for all of Western Civilization, and in particular for France.   President Hollande urged the public to remain unified in the fact of the threat, but is not offering any specific action. The Islamic State called Paris “the capital of prostitution and vice” in a statement claiming responsibility for the November 2015 attack.

Islamist Supremacist organizations will use terror tactics to advance their global Jihad agenda of totally transforming the world into their theocratic states – such as we have seen in Iraq, Syria, Turkey, Sudan, and Libya.

Today, they marched on in France.   They will continue their attacks as long as there is no French resistance or qualified plan to tackle the ideology in the Arab neighborhoods of French communities.

Brace yourselves, America. The Caliphate has been on the march in communities across America, silently penetrating small towns and big cities alike.   The “quite phase” of the Jihad conquest is starting to turn violent as evidenced in the San Bernardino attack and the Orlando attack.

Similar to France, the American homeland is largely unprepared.

Caliphate is Rising and America is warned.

Lisa has been involved in the security of Israel and the development of Israeli institutions for nearly 30-years. Working for scientific research centers, security policy centers, and universities in Israel, Lisa became known as one of the nation's foremost development advisors to Israel. Weeks after the 9-11 attack on America, The Investigative Project, called on Lisa to organize financing and awareness networks to counter the Islamic threat on America. That began her career as a recognized investigator and analyst. Lisa went on to do assessments in the Ukraine, Former Soviet Union and then on to work on behalf of the Jewish Federation and many of the top D.C. Policy Centers and Think Tanks working on counter-terrorism and foreign policy. Lisa is the host a highly regarded radio broadcast, The Lisa Benson Radio Show for National Security Matters on Salem Media, KKNT 960 The Patriot, Phoenix. She is heard around the nation every Sunday afternoon, and in Israel. Lisa has an undergraduate degree in archeology, Latin, and art history from the State University of New York, Albany. Her post graduate education was in public policy at the Rockefeller College of Public Policy at the State University of New York at Albany. Lisa is quick to say that a career in national security found her; but she will also say that it was her father, a concentration camp Liberator, chronicled in the United States Holocaust Museum, who motivates her every day, in spirit. He was among the first battalions of U.S. Army soldiers to liberate the Ohrdruff in April, 1945, the first concentration seen by American soldiers. Radio Talk Show Host ~ National Security Analyst, Commentator and Public Speaker www.LisaBensonRadioShow.com President: The Queen Esther Project www.TheQueenEstherProject.org Founder: The National Security Task Force of America