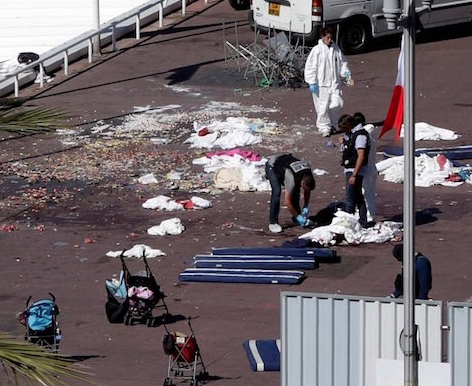 France suffered tragedy as radical Islam strikes again. Death toll with the latest reports 84 murdered in Nice, France, which is a place I know personally when I went to France on a high school trip. Prime Minister Bibi Netanyahu warned France over a year ago serious threat of radical Islam which was ignored. What will it take for the world to wake up and declare war on radical Islam.

Political correctness kills. Today’s leaders worry about offending the enemy instead of destroying the enemy. There is nothing wrong in defending oneself. True Hebrew translation from the infamous 10 commandments is not Thou Shall not Kill but Thou Shall Not Murder.

“If a terrorist is coming with a knife, it’s a mitzvah to kill him,” Rabbi Yitzhak Yosef declared in his weekly Torah lesson on Saturday night, which was first reported on the Haredi Orthodox news website Kikar HaShabbat. The Sephardic chief rabbi of Israel said religious law allows for a person to kill a terrorist brandishing a knife who is trying to stab someone.

World leaders have to put personal agenda aside for the greater good. United States President Barrak Obama continuingly refuses to say the word radical Islam as well as pushing gun control, taking away rights from lawful citizens to be able to defend themselves from domestic terrorist like Black Lives Matter, whose tactics are very similar to the Palestinian riots in Israel.   If only Obama spent time looking at the states with more gun control and countries like France and Germany which shows Radical Islamic terrorist use other means of terror yet still accomplishes a high death rate.

Countries should stop condemning Israel as well as stop telling us how to run our country and start working with us.   Many Israeli citizens openly carry guns, as well as statistically safer than most countries. Leaders of the free world should really ask are there mass shootings in Israel by Israelis? Obviously we know that answer. Praying yes indeed is very helpful, but God wants us to act because in this small world we are our brother’s keeper and it is our leaders’ responsibility to ensure safety of our people. Not the opposite like in France when their government has told its people after this attack to learn to live with terrorism. That is unacceptable, we learn to fight it and stop it.