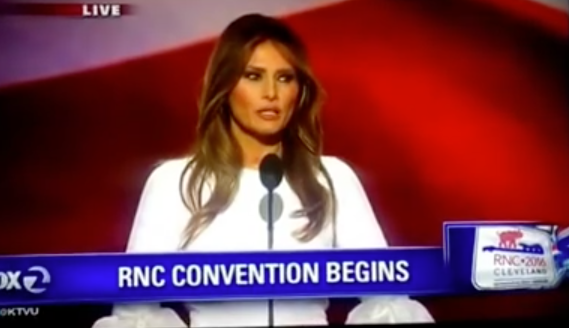 Here is the graph in question from Melania Trump’s speech:

“From a young age, my parents impressed on me the values that you work hard for what you want in life: that your word is your bond and you do what you say and keep your promise; that you treat people with respect. They taught and showed me values and morals in their daily life.”

“And Barack and I were raised with so many of the same values: that you work hard for what you want in life; that your word is your bond and you do what you say you’re going to do; that you treat people with dignity and respect, even if you don’t know them, and even if you don’t agree with them,” Michelle Obama said, according to a transcript from CNN.

It’s not clear who wrote Melania Trump’s speech, Convention speeches are often written by campaign aides, though Melania Trump in an interview with NBS said she wrote the speech.

“I wrote it, with as little help as possible,” she said.

The Trump team statement, attributed to senior communications advisor Jason Miller, makes note of none of this (emphasis added):

“In writing her beautiful speech, Melania’s team of writers took notes on her life’s inspirations, and in some instances included fragments that reflected her own thinking. Melania’s immigrant experience and love for America shone through in her speech, which made it such a success.

What exactly does “fragments that reflected her own thinking” mean?

Shrewd pundits have already pointed out that such line stealing is nothing unusual, and indeed President Obama himself has been caught doing the same:

And not once, but TWICE:

Still, it’s unwise to hand the Leftwing Media any ammunition to attack you.

Without taking away anything from Mrs. Trump, English is not her first language.  Her endearing accent belies a less than perfect command of the English language.  Consequently, the campaign should have  thoroughly proofread her speech draft for linguistic errors.  Taking the presumptive First Lady at her word, it is more than likely that handlers polished the draft, adding bits to improve Mrs. Trump’s final speech.  It is a simple thing to run a speech through Google to check it against other texts.

This does raise concerns about Trump’s campaign staff:  What sort of presidential campaign speechwriter lifts whole sentences from another recent prominent presumptive First Lady’s speech (and a Democrat one at that) and expects the media not to exploit it?  This was an unforced and unnecessary error, and one that allows an already hostile media a chance to mock a charming and solid speech by Melania.

While the error is hardly fatal to Trump – and may provide even more free campaign publicity – it becomes the media story, eclipsing the remainder of the speech.  A beautiful lady and a beautiful sentiment eclipsed by staff oversight.

John Kasich is Everywhere in Cleveland (Except the RNC)