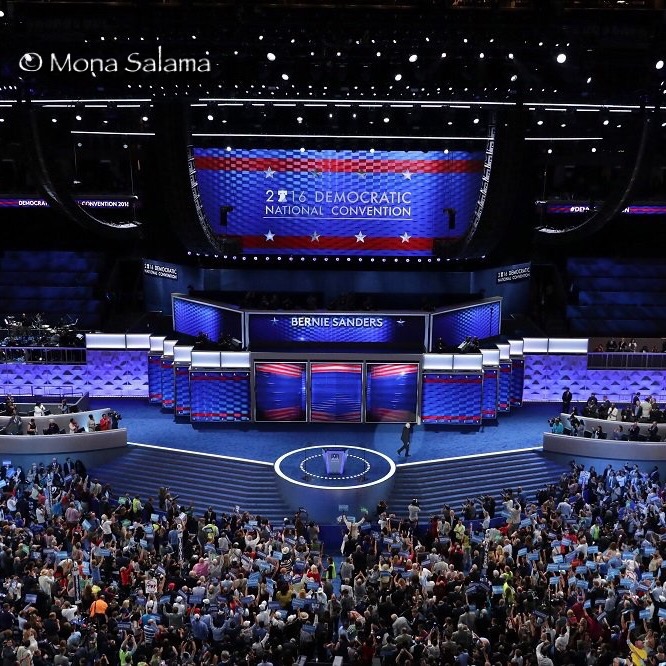 “What an incredible honor that you have given me, and I can’t believe we just put the biggest crack in that glass ceiling yet,” Hillary said via satellite at the end of the night. “If there are any little girls out there who stayed up late to watch, let me just say I may become the first woman President. But one of you is next.”

In an emotional night of tears, anger and cheers, Hillary secured the nomination in a procedural state-by-state roll call. Both Hillary and Sanders were up for the nomination with Rep. Tulsi Gabbard from Hawaii and second by Paul Feeney, legislative director of IBEW Local 2222 nominating Sanders ahead of the roll call vote. Senator Barbara Mikulski from Maryland nominated Hillary with Rep. John Lewis of Georgia seconding Hillary’s nomination.

“Because this movement is a fueled by love, it can never be stopped or defeated,” Gabbard said, proposing the convention floor to nominate Sanders as a candidate. “Now on behalf of millions inspired by ‘aloha,’ determined to seek a future reunited by love, passion, and justice for all. I am truly honored to nominate Bernie Sanders for President.”

Lasting for about an hour, the roll call was the last hope Bernie Sanders supporters held, hoping somehow their political idol would grab the nomination. Chants from delegates of “Bernie” and “Hillary” broke out as each state announced their vote count.

However, during the conclusion of the roll-call vote, the Vermont Senator, speaking in behalf of his state delegation, motion the convention to suspend the procedural vote to nominate his former Democratic rival by acclamation.

“I move that Hillary Clinton be selected as the nominee of the Democratic Party for president of the United States,” Sanders said.

In the final roll-call vote, Sanders accumulated 1,865 delegate votes – short of the 2,383 delegates needed to clinch the Democratic nomination, while Hillary clinched the threshold when South Dakota 15 out of 25 delegates put her over the top. The final delegate tally was 2,842 for Hillary, 1,865 for Sanders and 55 abstentions. Vermont’s 26 delegates, 22 for Sanders and four for Hillary were not included in the final count due to Sanders move to select Hillary as the nominee and ending the vote early.

Finally reaching the number to put her over the top to clinch the Democratic nomination, Hillary, taking a page from her GOP rival Donald Trump’s playbook by tweeting her reaction of the historic vote with a single word tweet of “History.”

The move by Sanders didn’t rub well with his die-hard supporters. Over a couple dozen Sanders’ delegates, angry with the recent headlines of the DNC email leaks that led to the ousting of DNC chair Debbie Wasserman Schultz and the nomination process they felt was rigged, staged a walkout out of the Wells Fargo Center once Hillary was announced the official winner of the Democratic nomination to the media tent next door.

Once inside the media tent, an area for reporters covering the DNC convention are set up , Sanders’ delegates began a silent protest, putting tape over their mouth that said “vote fraud” and “election fraud,” while forming a barricade line, an action they called “no voice, no unity.” The delegates protesting inside the media tent said the reason they went straight towards the press was to send a message to Sanders supporters across the country that they won’t be silent anymore.

“We are walking to the press, the people who we feel blocked out our candidate message to send a new message that we are not stopping this progressive political revolution,” a Sanders delegate told PolitiChicks. “The whole world is now watching and we won’t stop until the corruption stops.”