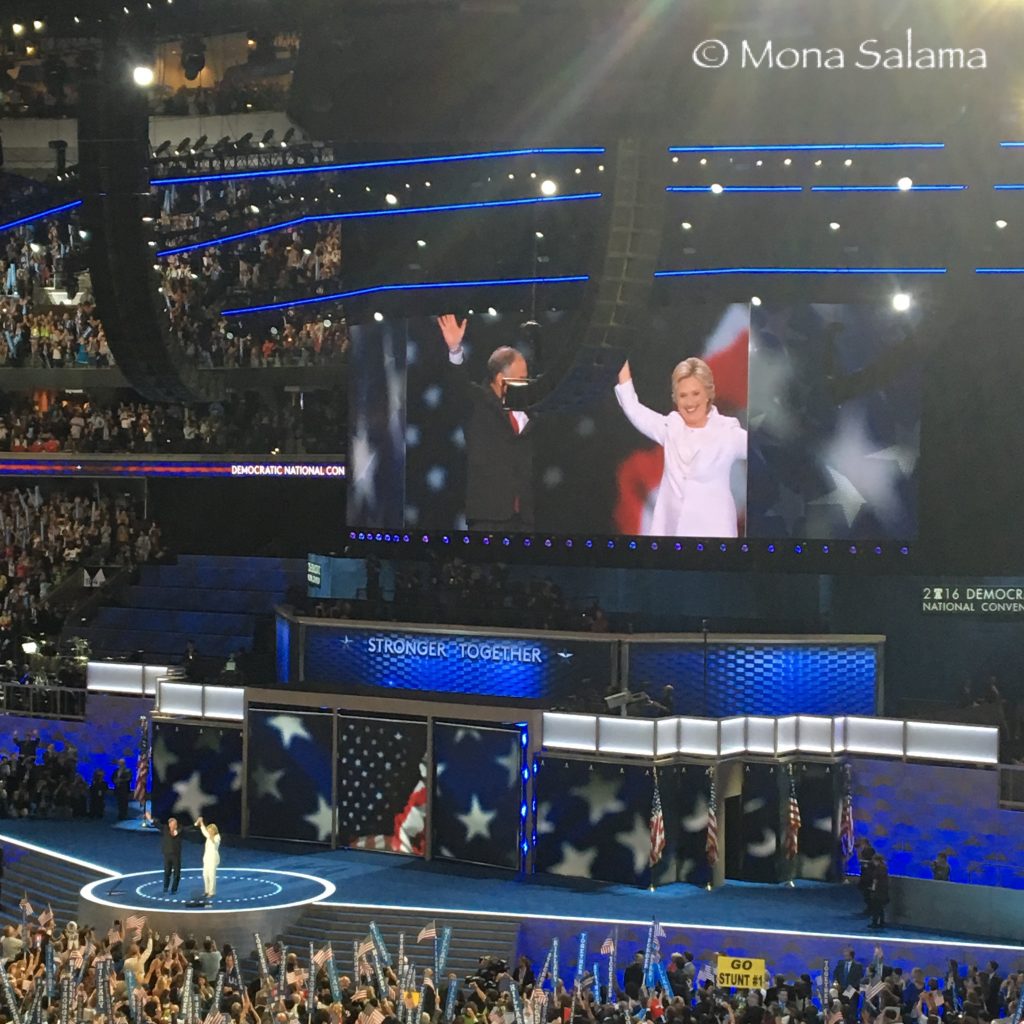 Philadelphia, PA. — The final night of the Democratic National Convention came to a close when Hillary Clinton marked her place in history by becoming the first woman candidate from a major-party accepting the nomination for president.

“It is with humility, determination and boundless confidence in America’s promise that I accept your nomination for President of the United States!” Hillary said, following a personal introduction from her daughter Chelsea Clinton.

In taking the torch from President Obama as the Democratic nominee for president, the former Secretary of State delivered a blistering attack speech against her GOP nominee rival, Donald Trump. Challenging his credential to become president, Hillary set the tone of a brutal smackdown that will be bruising beatdown between both candidate in the next upcoming 100 days.

“He’s taken the Republican Party a long way from ‘Morning in America’ to ‘Midnight in America.’ He wants us to fear the future and fear each other. He wants to divide us from the rest of the world and from each other.”

After a rocky start to a convention that showed the convention didn’t help the Democratic party become united as it has been reported, Hillary sought to win over her former rival Bernie Sanders supporters. The abrupt resignation of party Chair Debbie Wassermann Schultz and the endorsement of Hillary from Sanders couldn’t stop the unrest from Sanders supporters who spent the convention railing against Hillary’s nomination and the DNC. During Hillary’s acceptance speech, Sanders supporters staged an organized event outside the Wells Fargo arena, protesting the event by shouting, “Hell no, Never Hillary!” encouraging fellow Democrat voters angry at the Democratic establishment to deregister from the Democratic Party.

“Bernie, your campaign inspired millions of Americans, particularly the young people who threw their hearts and souls into our primary,” Hillary said as the Vermont Senator clapped with a grim smile in his seat when his name was mentioned. “To all of your supporters here and around the country, I want you to know I have heard you. Your cause is our cause. Our country needs your ideas, energy, and passion. That is the only way we can turn our progressive platform into real change for America. We wrote it together. Now let’s go out and make it happen together.”

However, Sanders supporters didn’t seem to believe what Hillary was saying. Her 56 minute long speech was interrupted numerous times by Sanders delegates, often shouting “Never Hillary!” The minor shouting would be drowned out by Hillary supporters chanting loudly, “Hillary!” Signs of ‘No TPP’ and ‘WikiLeaks’ would be overshadowed as well, with Hillary supporters blocking them with their own provided signs of Hillary campaign logo and the American flag.

Trump wasted no time attacking Hillary right back before her speech concluding, releasing a statement and ripped on her acceptance speech on Twitter.

Hillary’s wars in the Middle East have unleashed destruction, terrorism and ISIS across the world.

Hillary’s vision is a borderless world where working people have no power, no jobs, no safety.

Hillary’s refusal to mention Radical Islam, as she pushes a 550% increase in refugees, is more proof that she is unfit to lead the country.

In a statement, Trump stated Hillary and the Democrats live in a “fantasy world,” a world that doesn’t exist, such as the threat of radical Islamic terrorism, full employment, and secured borders.

“In the Democrats’ fantasy world, there is no problem with Hillary Clinton maintaining an illegal, exposed server full of classified information that could have been hacked by any foreign enemy,” the statement reads. “I propose a different vision for America, one where we can break up Washington’s rigged system, and empower all Americans to achieve their dreams, in our visions, we will put America First.”

Hillary, on the other hand maligned her opponent twitter responses as a loose cannon, stating Trump “lacks the temperament to be president” based off his twitter remarks.

“Imagine, if you dare imagine, imagine him in the Oval Office facing a real crisis — a man you can bait with a tweet is not a man we can trust with nuclear weapons,” Hillary said.

She continued her speech attacking Trump on his business record along with his campaign remarks to show Americans faces a “moment of reckoning” over a candidate with a “temperament and lack of experience.”

“Now America is once again at a moment of reckoning.  Powerful forces are threatening to pull us apart,” Hillary stated. “We heard Donald Trump’s answer last week at his convention.  He wants to divide us from the rest of the world and from each other.”

Hillary added, “Do you really think Donald Trump has the temperament to be commander-in-chief?  Donald Trump can’t even handle the rough-and-tumble of a presidential campaign. He loses his cool at the slightest provocation.”

Afterwards, the end of the convention was signaled by red, white, and blue balloons that fell from the ceiling. Hillary’s running mate, Virginia Senator Tim Kaine and Hillary’s husband, former president Bill Clinton and daughter Chelsea joined onto the stage to watch and celebrate the balloons falling as Katy Perry campaign theme song played.

Can the GOP Win the Women's Vote?