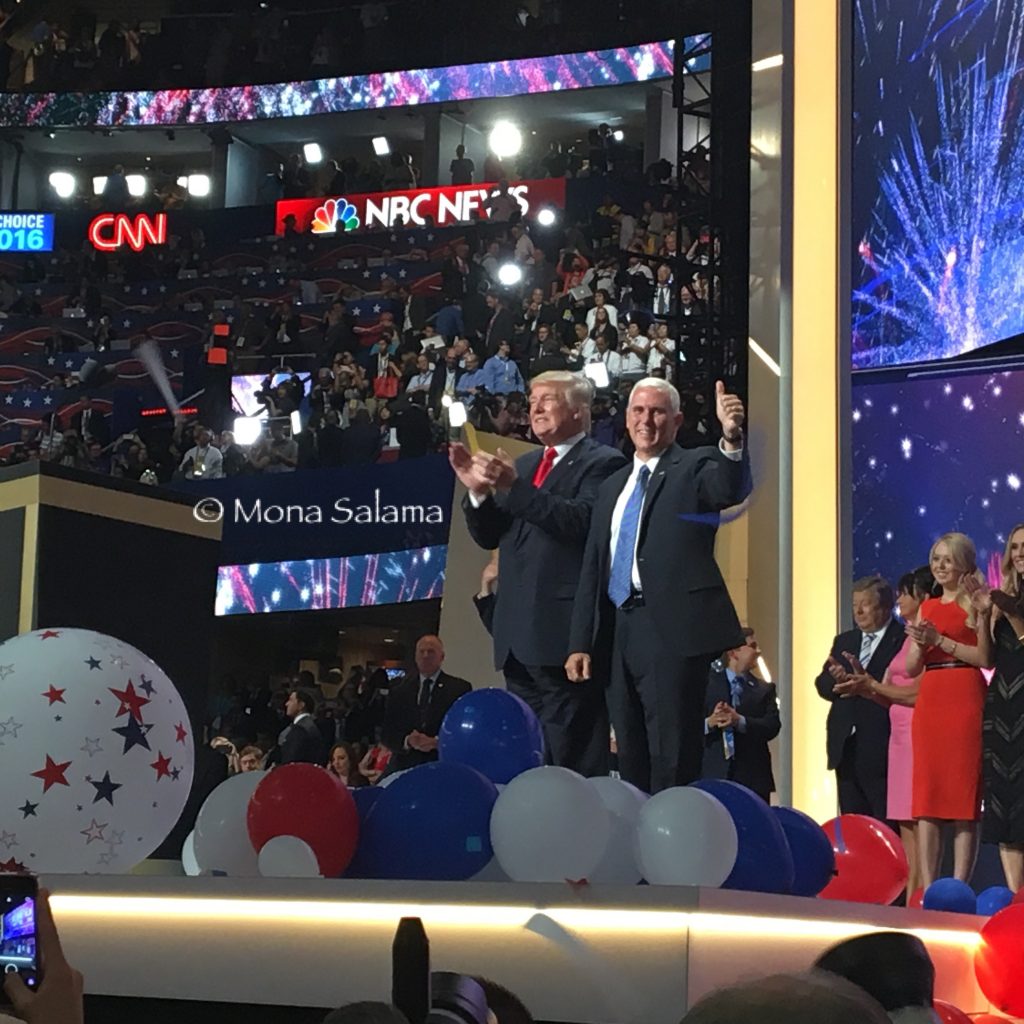 Cleveland, OH. — The Republican National Convention came to a close Thursday night with Donald Trump accepting the party’s nomination and delivering a fiery hour-long speech presenting himself as the “law and order” candidate.

“It is finally time for a straight-forward assessment of the state of this nation,” Trump said at the Quicken Loans Arena in Cleveland. “I will present the facts plainly and honestly. We cannot be so politically correct anymore.”

The GOP nominee was introduced by his daughter, Ivanka Trump, who is also the executive vice president of The Trump Organization. Ivanka, in a rousing passionate speech, that had the audience loudly applauding non-stop, described her father as a long-time champion of women and color-blind when it comes to hiring the best person for the job.

He is colour blind and gender neutral. He hires the best person for the job period,” Ivanka said. “Politicians talk about wage equality, but my father has made it a practice at his company throughout his entire career. He will fight for equal pay for equal work, and I will fight for this right alongside of him.”

Ivanka added, “When my father says he will make America great again, he will deliver.”

After “humbly and gratefully” accepting the Republican presidential nomination, Trump painted a gloomy portrait of a nation on the tipping pointing of becoming lawlessness and terror due to the action under President Obama and his Democratic rival Hillary Clinton. He ran down a laundry list of the problems that the nation is facing such as illegal immigration, increase terrorist threats and attacks at home and abroad, the senseless killing of law enforcements and economic stagnation.

“The attacks on our police, and the terrorism in our cities, threaten our very way of life,” Trump said. “The problems we face now poverty and violence at home, war and destruction abroad will last only as long as we continue relying on the same politicians who created them.”

After going down the list and running down the “plain facts that have been edited out of your nightly news and your morning newspaper,” Trump stated his “sole mission” to work for the American people.

Trump added, “My pledge reads: “I’m with you – The American people!” I’m with you, I will fight for you, and I will win for you.” 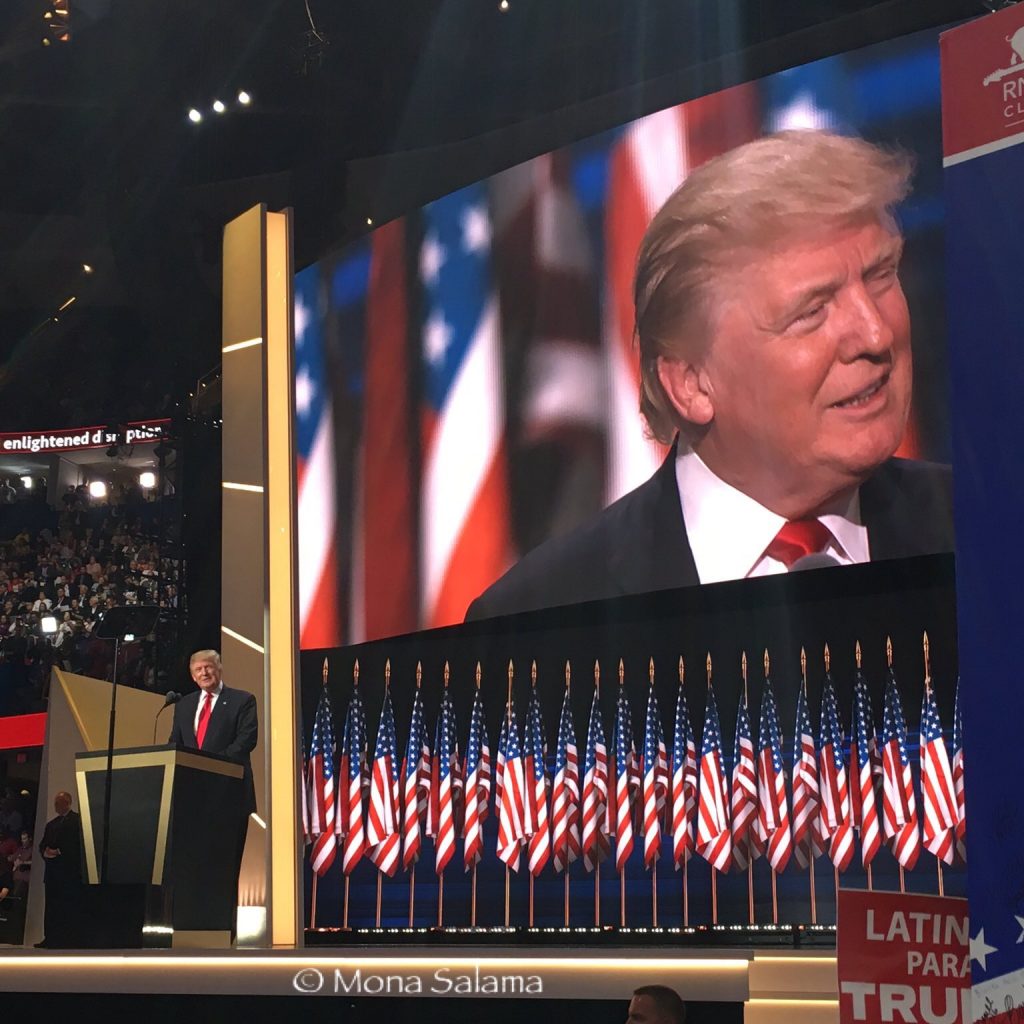 The four day event featured many speakers, both political and non political who devoted majority of their speeches savaging Hillary, Trump would also continue the theme centered on his rival and issues plaguing her candidacy.

“After fifteen years of wars in the Middle East, after trillions of dollars spent and thousands of lives lost, the situation is worse than it has ever been before,” Trump said. “This is the legacy of Hillary Clinton: death, destruction, terrorism and weakness, but Hillary Clinton’s legacy doesn’t have to be America’s legacy.”

Trump would go on with his attacks on Hillary, using her controversy scandal of her use of a private email server.

“When a Secretary of State illegally stores her emails on a private server, deletes 33,000 of them so the authorities can’t see her crime, puts our country at risk, lies about it in every different form and faces no consequences, I know that corruption has reached a level like never before in our country,” Trump said. “When the FBI Director says that the Secretary of State was “extremely careless” and “negligent,” in handling our classified secrets, I also know that these terms are minor compared to what she actually did. They were just used to save her from facing justice for her terrible crimes.”

Declaring himself to be the “law and order candidate,” Trump laid out a stark differences between his agenda and that of Hillary. As he continued on attacking his Democratic rival, delegates began chanting “Lock her up!” Trump, in a unconventional manner, would remain calm charging it down to say, “Let’s defeat her in November.”

He pledged to be the voice for Americans, sharing his plan of action of America that will put “America First.”

“Our plan will put America First,” Americanism, not globalism, will be our credo. The American people will come first once again.”

“I am your voice,” Trump declared, pointing into the cameras. “On January 20th of 2017, the day I take the oath of office, Americans will finally wake up in a country where the laws of the United States are enforced.”

The accepting speech was one of the most crucial moment for his presidential campaign to show the American people a more serious candidate during a time of uncertain of an outsider. It was also another way to unite the Republican Party after a vicious primary season that has left the party divided and tensions soaring after his former rival, Ted Cruz refused to endorse the GOP nominee just a day before.

Just before Trump took the stage to accept the nomination, Cruz defended his refusal to endorse Trump during a Texas delegation breakfast on Thursday morning. “I am not in the habit of supporting people who attack my wife and my father,” Cruz said. “That pledge is not a blanket commitment that if you go slander and attack Heidi I am nonetheless going to come like a servile puppy dog and say thank you very much for maligning my wife and maligning my father.”

Hillary and the Democratic Party is set to give their rebuttal to Trump and the GOP next week as they hold their own national convention in Philadelphia.

Maintaining Perspective Beyond the Resort Vacation Glitz and Glamour