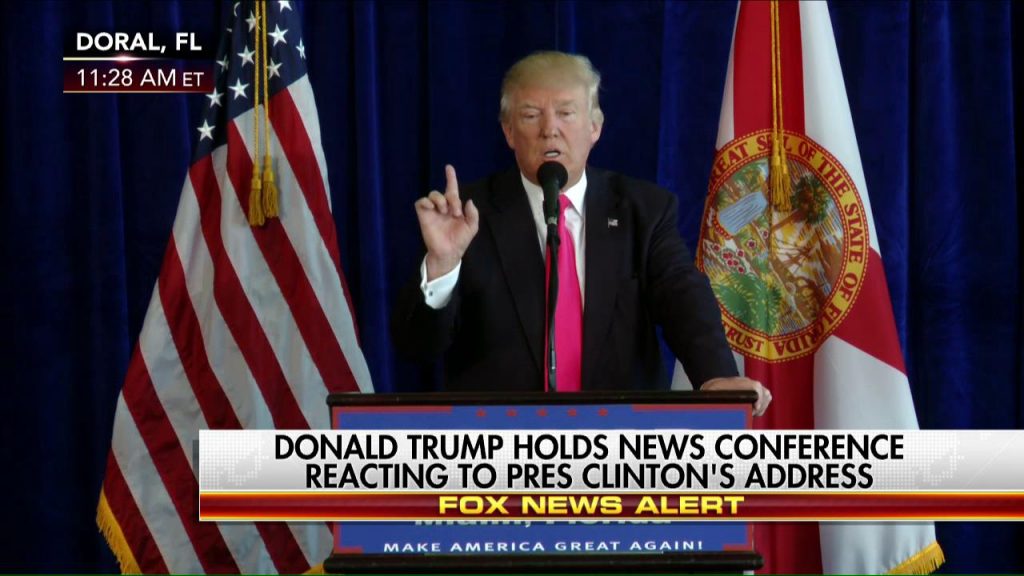 “Russia, if you’re listening, I hope you’re able to find the 30,000 emails that are missing,” Trump said at a press conference in Doral, Florida. “I think you will probably be rewarded mightily by our press. Let’s see if that happens.”

Trump added, “I think you will probably be rewarded mightily by our press. Let’s see if that happens. They probably have her 33,000 e-mails that she lost and deleted because you would see some beauties there.”

The question stemmed from the recent scandal that clouded the opening day of the Democratic National Convention when over 20,000 emails hacked from the DNC exposed the party favoring Hillary over her Democratic primary rival Bernie Sanders. The embarrassment of the scandal on the eve of the convention caused the party head Debbie Wasserman Schultz to step down. Speculation arose that the email hack released through Wikileaks were intended to hurt Hillary as means to help Trump win the presidency due to his previous remarks praising the Russian President Vladimir Putin.

On Tuesday, U.S. intelligence officials stated they are highly confident that Russia was responsible for the DNC hack.

Reporters during the hour long presser repeatedly questioned the GOP nominee  about his personal and business relationship with Putin. Trump stated he never met the Russian president and has no business deals in Russia.

“I never met Putin,” Trump said. “I don’t know anything about him other than he will respect me. He doesn’t respect our president.”

Asked if he would tell the Russian president to stop getting involved in the U.S. election, Trump responded that he wasn’t “going to tell Putin what to do,” and called the involvement from Russia another sign of “disrespect for our country.”

Trump went on to discuss a litany of other issues on Hillary, blasting his opponent for flip-flopping on Trans-Pacific Partnership, the showcase of the Democratic convention and her lack of transparency with the media.

“So, it’s been 235 days since crooked Hillary Clinton has had a press conference,” Trump said, regarding Hillary lack of holding press conferences. “And you, as reporters who give her all of these glowing reports, should ask yourselves why. And I’ll tell you why, because despite the nice platitudes, she’s been a mess.”

Trump added, “Just ask yourself, why she doesn’t have news conferences? And honestly, the reason is there’s no way she can answer questions because the job she has done is so bad.”

On the issue of TPP, an issue that has divided the Democrats during the DNC floor throughout the convention, Trump emphasized how his rival says anything just to get elected. For the past four days, Bernie Sanders supporters heavily showed their opposition to the trade deal, wearing tee-shirts and pins that read “NO TPP,” as well as bringing signs to wave during multiple speeches at the convention floor.

Hillary has promised repeatedly throughout this campaign cycle that she will not support the deal, even though she was the leading architect in creating TPP. However, top Hillary confidante, Virginia Governor Terry McAuliffe told Politico that the Democratic nominee if elected will support the TPP with minor tweaks.

“I worry that if we don’t do TPP, at some point China’s going to break the rules — but Hillary understands this,” McAuliffe told Politico. “Once the election’s over, and we sit down on trade, people understand a couple things we want to fix on it but going forward we got to build a global economy.”

Seizing on McAuliffe’s comment, Trump pointed out that he has warned before that Hillary would betray those against the trade deal and support it.

“[Hillary] lied about TPP,” Trump said. “So, all of a sudden she goes against TPP. She saw me talking about TPP and realized she couldn’t defend it.”

Trump added, “Her vice president pick is one of the biggest proponents of TPP. They will go for TPP and vote it in very shortly after the election if she wins, which for the sake of our country, I hope she doesn’t.”

Meanwhile, in Philadelphia, where the Democratic National Convention is being held, the Clinton campaign responded quickly to the press conference with a statement, fearing that Trump holding a press conference would takeaway the media headlines of her historic moment.

“This has to be the first time that a major presidential candidate has actively encouraged a foreign power to conduct espionage against his political opponent,” Clinton’s spokesman Jake Sullivan said in a statement. “That’s not hyperbole, that’s just the facts. This has gone from being a matter of curiosity, and a matter of politics, to being a national security issue.”

Au Revoir, France; You Lost Without a Fight.