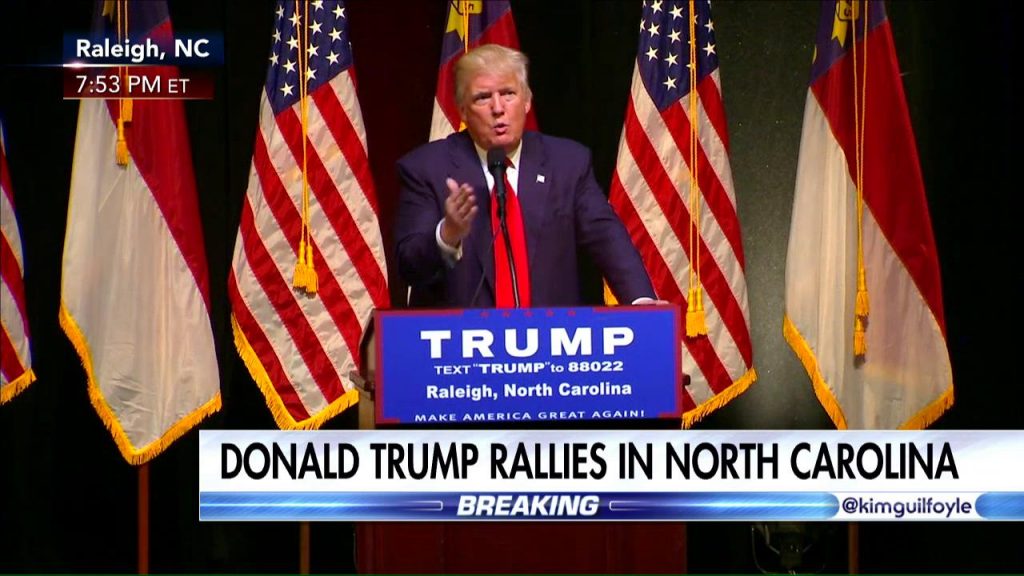 Declaring the system is rigged hours after FBI Director James Comey announced that it will not recommend charges against presumptive Democratic nominee Hillary Clinton over her handling of classified information on her private email server, GOP nominee Donald Trump slammed the FBI’s decision during a campaign rally in Raleigh, North Carolina.

“I’ll tell you that we have a rigged system folks” Trump said. “General Petraeus got in trouble for far less. Very, very unfair!”

During his hour long rally to a crowd of 3,000 gathered in Duke Energy Center for the Performing Arts, Trump focused most his remarks on criticizing the recent headlines centering Hillary email controversy and the news of the FBI decision.

Trump went on to suggest that Hillary bribed Attorney General Loretta Lynch after it was reported that if elected president, the former Secretary of State will keep Lynch as AG in her administration.

“So Hillary said today, which I actually found it hard to believe that she’d said this that we may consider the attorney general to go forward,” Trump said. “That’s like a bribe, isn’t it? Isn’t it sort of a bribe? I think it’s a bribe.”

Trump added, “I mean, the attorney general is sitting there saying, you know if I get Hillary off the hook, I’m going to have four more years or eight more years, but if she loses, I’m out of a job. It’s a bribe! It’s a disgrace!”

He also mentioned the recent airport meeting Hillary’s husband Bill Clinton had last week might have played a role in the FBI decision to not recommend charges. The news of the impromptu private meeting was reported by a journalist who asked about the meeting during a news conference at the Phoenix Police Department. Confirming that the meeting did occur, Lynch denied that both spoke about the ongoing FBI investigation of Hillary’s use of a private email server while leading the State Department and the 30-minute meeting was a social discussion about family and golf.

“What you witnessed today and over the last week, from Bill Clinton going to the plane, just happened to be there at the airport,” Trump said. “I wonder how long he waited to go to the plane and then to have what happened today where essentially I thought everybody thought based on what was being said that she was guilty and it turned out, they were not going to press charges. It’s just really amazing.”

On President Obama campaigning with Hillary earlier in North Carolina, Trump lambasted the president for campaigning instead of doing his job as president. “We have a president who is out campaigning for ‘Crooked Hillary Clinton’ and he should be home working on ISIS where things are getting worse and worse,” Trump stated. “It’s like a carnival act… he knew that the FBI was going to do this because it would have been very uncomfortable for him to campaign with Hillary if they didn’t take a pass on Crooked Hillary.”

“So they take a pass, they announce they’re not going to press charges, lo and behold, a few hours later, let’s have a press conference, let’s do a speech together,” Trump added.

As for Hillary’s Democratic rival, Bernie Sanders, Trump said the biggest loser out of today’s FBI’s decision was the Vermont Senator because an indictment would pave a way for him to claim the nomination.

“But a lot of Bernie Sanders supporters are going to vote for Trump,” he added.

“She went through extraordinary lengths to carry out an Enron style purge of her emails,” Trump added.

However, Trump would also criticize the FBI decision.