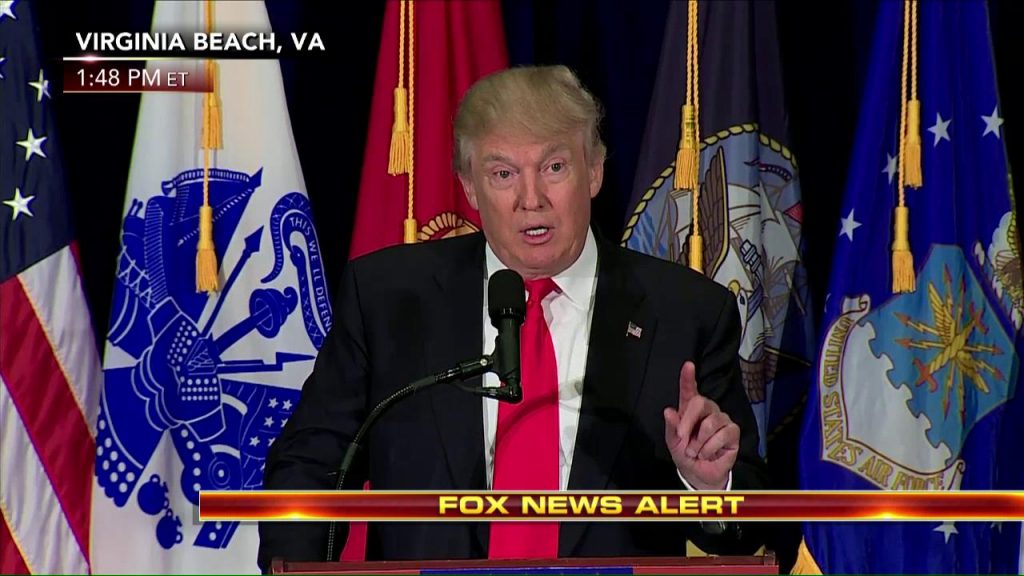 In a speech about veteran reforms, GOP presumptive nominee Donald Trump began his remarks praising law enforcement by thanking them for protecting our communities under relentless criticism.

“I would first like to address the contributions of another group who serve this country in uniform: the men and women in blue,” Trump said to a small audience in Virginia Beach. “Our Police Officers rush into danger every day to protect our communities, and they often do it thanklessly and under relentless criticism. But I want our nation’s police to know, that we thank you, and we support you, and we will always stand with you.”

In the wake of the ambush slaying of Dallas five police officers that occurred last Thursday night, Trump declared himself as the “law and order candidate,” while his Democratic rival Hillary Clinton is “weak, ineffective, and a liar or grossly incompetent.”

“We must maintain law and order at the highest level or we will cease to have a country,” Trump said. “I am the law and order candidate. Hillary Clinton, on the other hand, is weak, ineffective, pandering, and, as proven by her recent email scandal, which was an embarrassment not only to her, but to the nation as a whole, she is either a liar or grossly incompetent.”

Calling for an end to the attacks of law enforcement, Trump promised to ensure all Americans safety are protected equally. He also referenced the recent killings of two black men killed by police in Louisiana and Minnesota to make clear “the work must be done to ensure every American feels that their safety is protected.”

“Politicians and activists who seek to remove police or policing from a community are hurting the poorest and most vulnerable Americans,” Trump said. “America’s police and law enforcement personnel are what separates civilization from total chaos and the destruction of our country as we know it.”

Trump added, “It is time for the hostility against our police, and against all members of law enforcement, to end and to end right now.”

Following his praise on our law enforcement, Trump went on to discuss veteran reforms, in which he promised veterans that a Trump Administration highest priority will be to fix the corruption occurring in the VA system. Giving a 10-point plan to improve the VA system as well as ensuring high quality health care for veterans, Trump would also deliver the sharpest attack on Hillary, using her recent remarks of the VA scandal to draw distinction between himself and his rival.

“Hillary Clinton recently said of the VA scandal that ‘it’s not been as widespread as it has been made out to be,'” Trump stated. “She actually thinks that the Veterans Health Administration is well run – that’s because she has been part of the rigged system. Perhaps it is easy for politicians to lose touch with reality when they are being paid millions of dollars to read speeches to Wall Street executives – instead of spending time with real people in real pain.”

Calling Hillary the “secretary of the status quo,” Trump used the issue plaguing the VA system and her recent email scandal to slam his opponent.

“Crooked Hillary Clinton is the Secretary of the Status Quo and wherever Hillary Clinton goes, corruption and scandal follow,” Trump said. “If elected, Hillary Clinton would become the first President of the United States who wouldn’t be able to pass a background check.”

Reading from a teleprompter, Trump unveiled his 10-point plan that he promised will clean up the VA system from the corruption and waste by brining a “full investigation in January of 2017,” as well ensuring “every veteran will top-quality care.”

“The current state of the Department of Veterans Affairs is absolutely unacceptable,” Trump said. “The guiding principle of the Trump plan is ensuring veterans have convenient access to the best quality care.”

The 10-point plan outlined are:

American Blacks Being Manipulated By The Radical Left