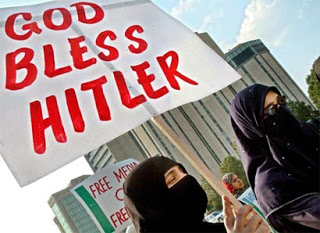 The UN Commission of Experts identified 1,600 actual cases of rape in the Bosnian War that took place in the former Yugoslavia over a period of years. In Germany, 2,000 Muslim migrants sexually assaulted 1,200 women in a single night in cities across Germany.

The former was considered one of the worst war crimes of the decade. Its perpetrators were bombed and then faced war crimes trials. The perpetrators of the latter received a slap on the wrist.

In Cologne, Hassan and Hussein were handed suspended sentences. Hassan, who had demanded that a man hand over two women to him by bellowing, “Give me the girls, give me the girls – or you’re dead” was tried as a juvenile offender and was sentenced to community service and an integration course.

The integration course will no doubt try to inform Hassan that women have a right not to be assaulted even if they are outside the house and unaccompanied by a male guardian. But such “Don’t Rape” classes for Muslim migrants have had a rather shaky track record.

A 16-year-old Muslim Afghan migrant raped a catering worker in France despite receiving a course on how to treat women in Flanders. Hassan, despite being tried as a juvenile, wasn’t a teenager at the time of his offense. He was a 20-year-old. But German courts still decided to treat him as a mischievous teenager. If the “boys will be boys” excuse has fallen out of favor in Europe, the pass still holds true for Muslim rapists who will always be boys. Even when they’re fully grown men.

In the Norwegian version of the “Don’t Rape” class, Muslim migrants were trained on how not to rape by being given positive role models. There was a bad fellow named Arne, a native Norwegian, who treats everyone badly, and Hassan, a charming Muslim immigrant who gets it right.

But the real life version of Hassan was a sexual predator who had walked away laughing from the court room with a suspended sentence while his victims, who had come out to testify, wept.

Now Hassan will giggle his way through yet another “Don’t Rape” class and this one may also have Hassan as a positive role model. And then Hassan will be out there for the next New Year’s Eve knowing that he will get away with it all over again. And by then he might be a slightly older “juvenile”.

The majority of the Muslim rapists came from North African countries. Half of them had been in Germany for less than one year. If there were a UN tribunal to be held for the war crimes committed by Muslim migrants against European women, Frau Merkel should be sitting in the dock.

It was her decision to open the borders that led to the horror inflicted on 1,200 women in one night.

And 1,200 women is just a single episode. We don’t know the full total numbers. And we may never know them. Yet at this rate it’s entirely possible that the total of Merkelicide might exceed even the wildest inflated estimates from the Bosnian war. And yet it’s considered indelicate to discuss such things because this time around Muslims aren’t the victims, they are the perpetrators.

It’s not just Merkel and the German authorities who find the topic uncomfortable.

Selin Goren, a spokeswoman for a left-wing refugee group, admitted to lying that the men who sexually assaulted her were German instead of Arabs because the act of the rape had a “political dimension”. Instead of thinking of the men who had assaulted her, she thought of a pro-refugee rally in which she had called for fighting “against racism and sexism”.

And predictably the former took a back seat to the latter.

When the police officer asked her if refugees had been responsible, she retorted that they had spoken German while resenting the officer for being so racist as to assume, correctly, that Muslim migrants were to blame.

A friend had told her that she acted like a battered wife protecting her abusive husband.

It’s an accurate description of not just her, but of the entire left which has turned its own values inside out in order to protect Muslim rapists from a theocratic culture not fundamentally different than ISIS which believes that women are fair game during their gleeful invasion of Europe.

The German Parliament’s efforts to tighten sexual assault laws, usually a cause championed by the left, has made the left very uneasy because it endangers their favorite new refugee pets whose neediness is exceeded only by their predatory behavior.

Halina Wawzyniak, a lawmaker from the Left Party, insisted that while she usually supported stronger sexual assault laws, she worried that these particular sexual assault laws would lead to a “disproportionate” effect on Muslim migrants committing minor sexual offenses who might then be deported.

And so, given a choice between protecting women and sexual predators, the left chooses rapists.

This is the simple ugly truth about their refugee policy and our refugee policy. From Cologne, Germany, where the authorities have done far more to crack down on people making critical remarks about Muslim migrants than on the Muslim rapists, to Twin Falls, Idaho, where United States Attorney Wendy J. Olson warned anyone spreading “inflammatory” statements about the Muslim perpetrators that they might be violating “federal law”, the priority is protecting Muslim rapists at any and all costs.

Two of the Cologne attackers received suspended sentences. Hamburg courts freed their suspects from pre-trial detention. Not only will the vast majority of the 2,000 attackers never even come close to facing trial, but the few who do will see small and feeble sentences.

It’s not that German authorities are incompetent. A January headline informs us, “Germany springs to action over hate speech against migrants”. Merkel forged a censorship deal with Facebook and Twitter. So that next time Muslims commit thousands of sexual assaults, it will be much harder for the populace to get the news out through the digital curtain of dot com censorship and propaganda.

With her Communist background, Merkel understands the mechanics of censorship. And that makes her an accessory to the war crimes that Muslim migrants have committed in their invasion of Europe both before and after the fact.

A 29-year-old German woman had received five months probation for her outrage over Muslim rapes of women. In today’s Germany, the sentences for Muslim sexual assaults and for denouncing them are eerily similar.