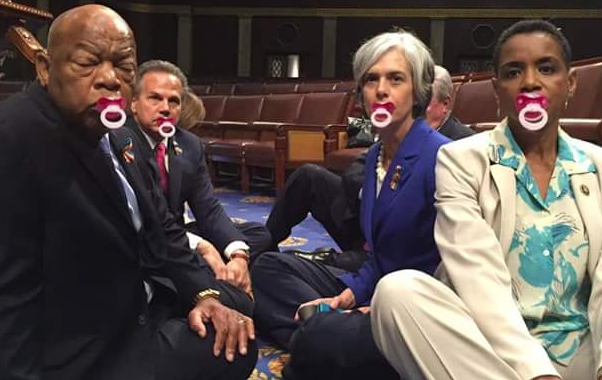 We don’t have an adult political system. What we do have is a political system in which childish tactics are used to play childish games with adult consequences. As described by Dr. Berne in Games People Play, “games” are dysfunctional strategies that can be used by adults to elicit childish or parental responses. Childish strategies shift responsibility to the “parent” while still claiming power. An adult who acts like a child gets to control what happens without being responsible for it.

(This article uses a very loose adaptation of Berne’s Games People Play as a model.)

When the left shifted from a worker’s movement to a youth movement because dissatisfaction was more likely to be found in the children of the middle and upper classes than among workers, protest strategies often became childish. The classic protesters were self-consciously juvenile outraging sensibilities so to force their establishment opponents to play the role of the sanctimonious parent while they reveled in being the liberated children. “Outrage” is a game that children learn to play at an early age. Some adults never stop playing it, at parties or at family reunions. 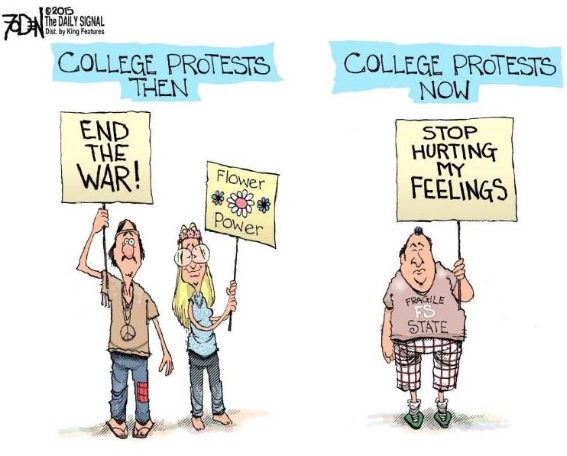 The modern campus crybully movement doesn’t seek to outrage sensibilities by being provocative. Instead it’s playing an even more immature childish game. The Yale protest over “offensive” Halloween costumes was the perfect example as a student screamed, “It is your job to create a place of comfort and home for the students who live in Silliman.” This is the “Bad Parent” game.

Protesters, whether on campus or at #BlackLivesMatter events scream about their pain and how neglected they are. They claim to be traumatized, exhausted, in fear of their lives and unable to go about their daily business because the adults aren’t taking good care of them. They’re bad parents. 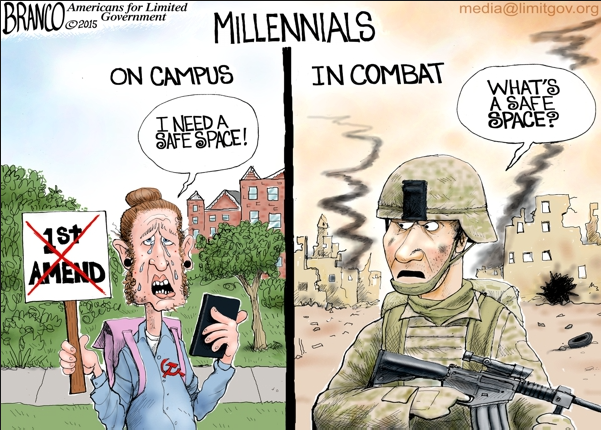 The classic protesters were playing children outraging parental sensibilities. The modern protesters claim to be abused children who need safe spaces and protection from bullying. They demand the right to be children while everyone must adopt the role of parents and coddle them. Tears, outbursts and tantrums glorified as “die ins” in which everyone lies on the floor reinforce their childish case.

The “Crybully” is a perfect example of adults using childish behavior to achieve their demands while forcing their opponents into a parental mode. The protesters openly disavow responsibility for their own behavior and demand that administrators, authorities and society stop being bad parents.

“Bad Parent” is a further regression to childhood than “Outrage”. Its origins go back directly to the coddled baby. Crybullies achieve their political goals using a childish strategies in which they use power while claiming to be powerless and demand that those who have power do what they want.

There are two ways to counter this protest style. The adult approach is to insist that the protesters are adults and must be responsible. Rather than falling into the parental style which reproves and plays into the psychodrama, the adult style is to reject the entire dynamic and hold them responsible.

The more familiar way is to meet them on a childish level by taunting and ridiculing their childishness. This can be emotionally satisfying. But it plays into the psychodrama, riling up the crybullies to further cries that they are being picked on. The authorities are pressured to stop being “bad parents” and protect them. Enough taunting may lead the crybullies to overplay their hand, but it is at least as likely to lead to crackdowns on free speech. This already occurred on Twitter.

But protests are increasingly juvenile in nature. Occupy Wall Street consisted of a bunch of grad students from wealthy families camping out in a New York City park usually used by secretaries and construction workers on their lunch break, fouling it, issuing incoherent demands, conducting hand signal sessions and generally tiring out even the patience of their biggest supporters. 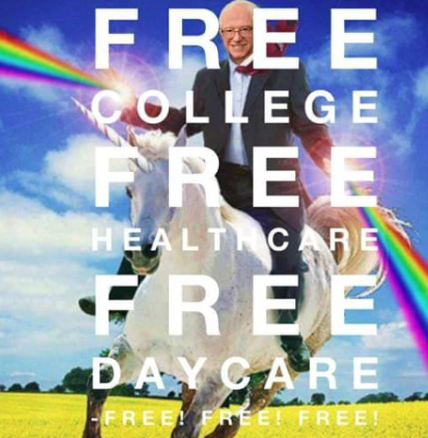 Bernie is the candidate with the most juvenile appeal for obvious reasons. The game he’s been playing is “Don’t Wanna Go To School”.

“Don’t Wanna Go To School” is a familiar game for most parents.

Mom: All children have to go to school

Billy: Nobody should have to go to school

There’s nothing resembling a sensible and coherent plan for working any of this out. But the negative assertion is inherently popular and liberating. It also forces critics into unpopular “sensible” adult and parental roles. It forces them to be the ones telling the child about the real world.

Mom: But if you don’t go to school, how will you get a job and make money?

Billy: Everyone should get money for free.

Mom: But if everyone gets free money, it’ll be worthless.

Billy: There should be a law that stores have to give you stuff anyway

Bernie’s strategy is forcing Hillary Clinton to play “Mom” and explain why this won’t work. And nothing is quite as alienating to younger Bernie voters than listening to her “But if you don’t go to school” speech.

Bernie Sanders may be old, but he’s been playing “Don’t Wanna Go To School” all his life.

Sanders took his first bride to live in a maple sugar shack with a dirt floor, and she soon left him. Penniless, he went on unemployment. Then he had a child out of wedlock. Desperate, he tried carpentry but could barely sink a nail.

Bernie Sanders encourages his supporters to maintain a juvenile role. But Bernie playing the child role forces Hillary Clinton into the parent role. And then she becomes the “Bad Mom” who won’t let everyone have candy. That makes her even more unlikable.

Hillary Clinton’s base becomes older voters and black voters who appreciate the need for a strong maternal role. While younger voters are drawn to Bernie’s “Don’t Wanna Go to School” campaign.

Hillary Clinton – I Don’t Want to be Responsible Anymore 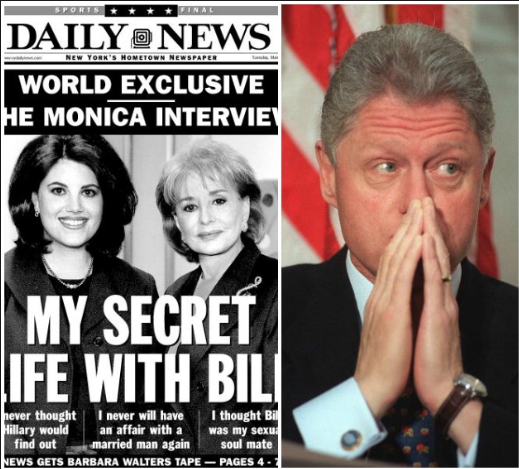 Bill Clinton was always playing the “You Caught Me” game. This is a common juvenile game in which the child breaks something intending to get caught. After initial recriminations, the child charms his way out of the offense and has love showered on him. This is more common when the parent feels guilty or neglectful because of a family situation. Likely the case for Bill Clinton.

Bill went on playing “You Caught Me” throughout his White House years and both of Hillary’s campaigns. In the game, he makes a mess that everyone around him has to clean up.

“You Caught Me” is not really self-sabotage though it looks that way. It’s a straight refusal to adopt adult responsibility because of learned rewards for childish behavior. Bill Clinton’s messes don’t hurt him. They create more work for those around him while making him the center of attention.

Hillary Clinton however engages in actual self-sabotage by telling ridiculous lies that are certain to be exposed, e.g. under fire in Bosnia, negotiated peace in Northern Ireland. This game is an even more familiar one. It’s “I Don’t Want to be Responsible Anymore”.

“I Don’t Want to be Responsible Anymore” is played by powerful people, overachievers who are not receiving emotional rewards for their efforts. The senior male politician who stupidly commits adultery and the executive who blatantly embezzles to gamble are examples of this behavior. They are driven to achieve, but their achievements don’t make them happy, so they undermine their own achievements with childish behavior to revert back to a happier and less dutiful time. 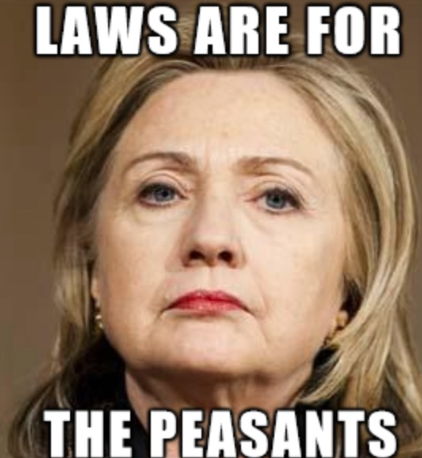 Hillary Clinton is driven to achieve power in a democratic system, but she dislikes people. While her husband genuinely liked campaigning, she hates it. Her attempts to pretend that she likes to meet people make her seem artificial and phony. Bill Clinton found emotional rewards in politics. If Hillary Clinton finds them anywhere, it’s in the actual use of power. But she never truly had that.

“I Don’t Want to be Responsible Anymore” is also often played by the spouses of irresponsible men. It’s a game for dutiful people who are not truly responsible, who are stuck doing what they don’t like to do, and sabotage themselves to find a way out. Their sabotage is a cry for help. A part of them that they won’t admit to hates their life and is looking for an exit.

A Senator begins a wildly inappropriate affair that he knows will come out. A bank executive plays online poker and has to steal from the bank to keep going. A Secretary of State sets up a private email server in the clumsiest way possible continuing a long career of clumsy unnecessary scandals. They know that they will get caught. And they don’t even have a plausible excuse to offer when they do.

Brigitte Gabriel: What Is Really Driving the Terrorists