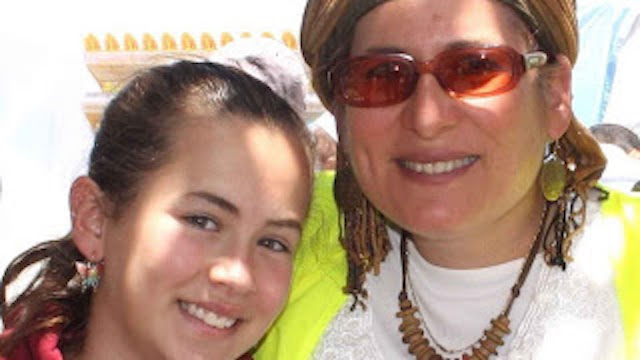 Hallel Yaffa Ariel, a 13-year-old girl, was asleep when she was murdered in her own bedroom. She had just graduated 8th grade. It was her summer vacation and she was taking it easy. The Muslim terrorist who broke into her bedroom stabbed her over and over again. Eventually he slit her throat.

The mattress that she slept on was soaked in blood. Her room with its casual teenage disarray, clothes tossed around carelessly, was stained red with the last gush of life from the girl who had played there, danced there and dreamed of the future that would never be hers.

The murder happened in Israel, but Hallel was an American citizen. Her government not only failed to protect her, it financed her bloody death. And it will go on rewarding her killer’s family.

Muslim terrorists in Israel, no matter which specific Islamic terrorist group they claim allegiance to, whether they are described as members of a cell or lone wolves, have their attacks funded by the terrorist administration of the Palestinian Authority which provides salaries to terrorists and their families. The Palestinian Authority is funded almost entirely by foreign aid, most of it from us. Obama insisted that Abbas, the terror boss of the Palestinian Authority, had “renounced violence”. This would have come as news to Abbas who boasted, “There is no difference between our policies and those of Hamas.” Last month, an Abbas adviser had said, “Every place you find an Israeli, slit his throat.”

That’s what Mohammed Tarayrah, the Muslim terrorist who murdered Hallel in her bedroom, did.

At her funeral, Hallel Yaffa Ariel’s mother tried to hug her daughter one last time. “Halleli, goodbye, sweetie. Have one last hug from mom.”

The United States has officially condemned Hallel’s murder. Its current government however will do nothing to stop the Palestinian Authority from funding terrorism. Instead it will continue using its power to fight for the same cause as Abbas and Mohammed. Hallel was not the first American to be murdered by Muslim terrorists this year. She was the seventh.

As many Americans have been killed by Muslim terrorists in Israel this year as were killed in Iraq. It’s a grim milestone that the media doesn’t talk about. The Palestinian Authority is ISIS with better press.

This year’s American victims included Taylor Force, an Iraq War veteran visiting Israel who was stabbed to death on a street during Biden’s visit and Tuvya Weisman, who ran to stop a terrorist in a supermarket only to be butchered, and whose murder was met with a call by the State Department “for all sides to reject violence”. This cynical and devious moral equivalence is typical of our diplomats. The Palestinian Authority praised Taylor Force’s killer as a “martyr” and its news organization claimed that it “did everything it could and applied national and political pressure to the other side so they would transfer the Martyr’s body” for his official wedding to the 72 virgins.

The “Palestinian” terrorists of Islam are our own ISIS and we are funding their horrifying crimes.

On Facebook, Mohammed wrote, “Death is a right and I am asking for my right to die.” He got his wish. Now it’s time for the corrupt and violent system that created him to join him.

Death is all that the “Palestinian” cause is or will ever be. There will be no solution, no two states living peacefully side by side. The only thing that aid to the Palestinian Authority finances is the murder of little girls.

Not peace, justice, progress or political change. Just children murdered in their beds by a death cult.

The BDS hate movement demands a boycott of Israel. It’s time instead for us to divest from Palestine. Divestment isn’t hard.

Do not donate to a charity that cooperates with the Palestinian Authority or conducts any work in PA controlled territory. Do not donate to any groups that provide grants or funding to these charities. Examples include UNICEF, Catholic Relief Services, Mercy Corps, United Way and many others.

To the extent that there is an economy in the territories of ’67 Israel controlled by Islamic terrorists, it’s based around non-profits funded by us ranging all the way from the UN down to small local groups. The Palestinian Authority is a giant welfare state that subsidizes domestic and international terrorism.

It’s time to defund it.

That means working for the end of any foreign aid to the Palestinian Authority, as well as to UNRWA, the UN agency that is the major component of the terrorist welfare state. Divestment should be total and complete. We have long held to the principle that there is no such thing as charity when it comes to terrorists. Instead we regard donating to charities controlled by terrorists as funding terrorism.

It’s time to apply this fundamental principle to the Palestinian Authority and all its funders. “Palestinian” Islamic terrorism will not stop with negotiations. We’ve tried that and it failed. This terrorism isn’t caused by despair, but is bought and paid for by financial incentives. Cut off the money and terrorism dies. Stop the money that promotes and rewards it and it will wither in the darkness.

The only thing that all the optimistic rhetoric about peace has led to is the murder of 13-year-old girls. Funding terrorism will never stop terrorism. Only defunding it can.

Pundits claim that the terrorists feel “hopeless”. Nothing could be further from the truth. They have a great deal of hope. They hope for the suffering of their victims, for the triumph of their cause and for 72 virgins in paradise. By fighting them we can take away their first hope, by defunding them we can take away their second hope and leave them with nothing but their false faith in Allah’s whorehouse.

And if belief in Allah’s whorehouse and its 90-foot-tall virgins were enough to motivate Islamic terrorism, the Palestinian Authority wouldn’t be spending $130 million a year on payments to terrorists.

Your average Muslim terrorism might be crazy, but he isn’t stupid. He isn’t killing anyone for free.

We’re the ones who are paying Muslims to kill us in the hopes that funding terrorists will lead to peace. That makes us both crazy and stupid.

Divesting from Palestine means pushing our politicians to stop all funding into areas under Palestinian Authority control until the terror group stops financing terrorism. It means not donating to any charities that do work in those same territories or doing business with companies that operate there.

The supporters of the “Palestinian” cause have made boycotts of Israel into their new tactic. They should be made to choke on it. Israel actually has an economy. Its people work for a living. Their Islamic terrorist enemies don’t. Instead they remain entirely dependent on a welfare state that we fund. BDS for Israel can never succeed. BDS for Palestine can go for a narrow and vulnerable choke point.

Divest from “Palestine” and it, along with its bands of murderers and killers, ceases to exist.

Terrorism can be over, if we want it to be. All we have to do is be willing to cut up its credit card.

Being Above the Law in America