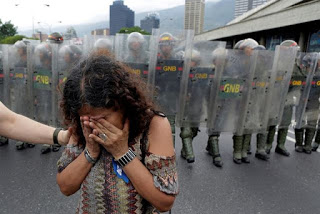 A mob of starving people advanced on the presidential palace chanting, “We want food”. They were met by soldiers and police dispatched by the tyrant from his lavish palace decorated opulently with a golden sun, giant rock crystal mirrors, sparkling chandeliers and towering oil portraits.

And if you are wondering why you haven’t seen it on the news, it’s because Venezuela is a Socialist disaster area that was once being used as a model by the left. Now it’s a place where the vast majority of people can’t afford basic food staples and a third are down to two or fewer meals a day.

Obama laughed and joked with deceased monster Hugo Chavez, who handed him a copy of the anti-American tract, “Open Veins of Latin America” that had even been disavowed by its own author. Obama called the book a “nice gesture”, but Eduardo Galeano, its author, had told an audience that the left “commits grave errors” when in power.

Venezuela, once a wealthy oil state, where the doctors offering “universal health care” have no medicine and starving people loot government stores looking for food, is yet another example. 50 people are dead in the latest food riots. Their graves are yet another “grave error” of the left.

Obama has not appeared too concerned at the meltdown in Venezuela. Unlike Syria, there are no threats of intervention to remove Maduro, Chavez’s successor, and the rest of the leftist regime illegally clinging to power while slaughtering Venezuelans, smuggling drugs and aiding terrorists.

When Hugo Chavez was killed by the wonders of Cuban medicine, a remedy that American leftists recommend to others while they obtain the best private health care for their own ailments, Obama offered a vague statement of support calling Chavez’s passing, “challenging”.

It was certainly that.

Chavez had been none too tightly wound; claiming that capitalism had destroyed life on Mars, that Jews run the world and that his cancer had been caused by America, but his successor, Nicolas Maduro is insane. Maduro claimed that his deceased predecessor appeared to him in the form of a “little bird” and on a subway wall. He showed off the photo of the wall on state television while crying.

Hugo Chavez is indeed everywhere. His portraits cover Venezuela. They’re a lot easier to find than food. And these days Venezuelans are far more interested in finding something to put in their mouths.

The left-wing sociologist running the Venezuelan economy doesn’t believe in inflation. Last year he wrote a pamphlet in which he insisted that “Inflation does not exist in real life.”

Inflation certainly exists in Venezuela which has seen 500% inflation. The Socialist regime responded with price controls. When stores and farmers wouldn’t sell at set prices, soldiers were sent in to take them over. Crowds initially cheered all the subsidized products. But they wouldn’t be cheering for long. 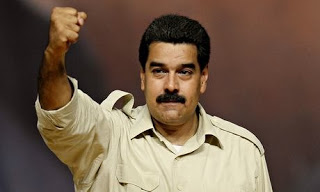 After the fun of electronics stores forced to discount televisions at gunpoint, there were no more televisions. And no more cars. Then no more toilet paper, milk and other basic necessities.

The Socialist government tried to solve its money problem by printing more money. But it wasn’t able to pay for the money it wanted to print because of the inflation which officially did not exist.

Venezuela needs 10 billion bank notes in its new inflationary economy, more than America, and it can’t pay for them. Or pay for anything else. It can’t afford to import food and it refuses to pay fair prices at home. Meanwhile eggs, at the official exchange rate, run to $150, McDonald’s fries for $126 and a pound of coffee for $85. Socialists may not believe in inflation, but inflation believes in them.

No wonder the people are starving.

Teachers sell passing grades to students in exchange for milk and flour. Lines at government stores are endless and an entire economy has been built on buying and trades spots on food lines. Fingerprint scanners are used to enforce milk rations. And a heavy military police and military presence is required to stop mobs of starving people from grabbing the food as soon as it arrives.

The military elite receive special food privileges. In a country where bread and butter have become distant memories for many, the guns used to oppress the Venezuelan people are paid for with butter. And the people are fighting back. The government calls its crackdown on starving people “Operation People’s Liberation”. The people however want to be liberated from their socialist liberators.

When the Socialist regime responded to electoral defeats by rigging the Supreme Court and arresting the free market opposition, the street battles intensified. The “Liberators”, who have the luxury of eating butter with their bread, are fighting hungry men and women in the streets of cities. And sometimes it’s the socialist “liberators” who are forced to retreat from the true people’s liberators.

While the socialists route food through the United Socialist Party of Venezuela’s CLAP committees to their own supporters, ordinary Venezuelans are hunting pigeons, and even dogs and cats in the capital.

Before the last election, Chavez said, “If I was from the United States, I’d vote for Obama.” And the two leaders do have some political and economic views in common. The fundamental difference is that it took Venezuela a lot less time to run out of “other people’s money” than America.

A few years ago, the left-wing site Salon was praising “Hugo Chavez’s economic miracle” and suggesting that we should follow his example of nationalizing companies. “Are there any constructive lessons to be learned from Chavez’s grand experiment with more aggressive redistribution?” its author wondered.

Someone ought to ask the starving mobs redistributing government food while dodging bullets.

Venezuelan socialists used the familiar language of claiming that subsidies and free services were human rights. “Health care can’t be privatized because it is a fundamental human right,” Chavez once claimed. That should sound familiar. Bernie Sanders and Hillary Clinton have said the same thing.

But Venezuela’s universal health care has no actual medicine. Hospitals have no running water or soap. Victims arrive with gunshots and aren’t treated until they settle their bill. Babies die routinely.

And it goes without saying that there is no food. 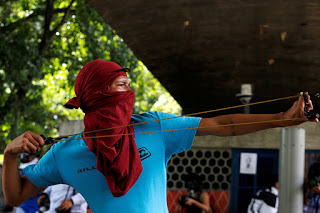 “I doubt that anywhere in the world, except in Cuba, there exists a better health system than this one,” Maduro insists.

Socialism killed Venezuela. The country has no food, no money, no power, no health care and no hope. Venezuelans were promised a better life through government. This is what they received.

There are lessons for us here and they are obvious ones. And that is why the media has minimized its coverage of a horrific crisis. The people chanting that they want food are not rebelling against unfeeling corporations, but a government whose economic policies many on the left had viewed as a model.

The popularity of Bernie Sanders is based on many of the same empty promises of freebies for all that made Hugo Chavez such a hit. Venezuela is a model of how well that works out in real life. Socialism is increasingly popular in America. Meanwhile in Latin America, socialism kills babies and drives starving mobs to demand food outside the presidential palace under the guns of the regime’s soldiers.

It’s an old story, but it’s also a new story because when we forget history, then we are forced to repeat it.

I Liked My Health Plan...And Now It’s Been Cut.

FBI Dir. Comey and Hillary: Side-by-Side Videos PROVE She Should Be In Jail.