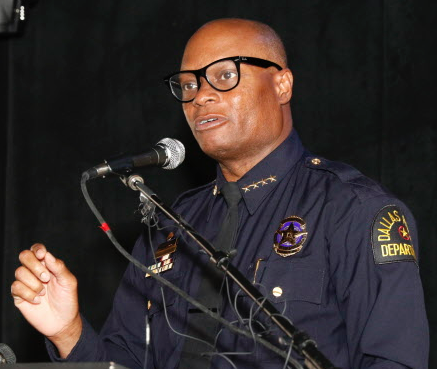 The Dallas sniper’s home had bomb-making materials and a rambling journal which showed plans for a larger effort to target law-enforcement officers for what he saw as abuse of minorities, according to Dallas Police Chief David Brown.

“We’re convinced this suspect had other plans and thought that what he was doing was right,” Brown said Sunday in an interview on CNN. “He was going to target law enforcement and make us pay.”

The videos of police shootings of suspects in Louisiana and Minnesota “just sparked his delusions to fast-track his plans,” Brown said. “He saw the protest in Dallas as an opportunity to start wreaking havoc on our officers.”

Micah Xavier Johnson, a 25-year-old Army veteran who served in Afghanistan, was killed by a bomb-deploying police robot after a standoff with police. Dallas officials say he was the sole shooter who killed five police officers and wounded seven other people during a Black Lives Matter protest march Thursday night.

During Sunday’s interview, Brown gave new details of his department’s confrontation with Johnson, saying that the suspect had engaged in a mocking two-hour conversation after police had pinned him down in a parking garage.

“He lied to us, he was playing games, laughing at us, singing, asking how many did he get,” Brown said, saying “he seemed very much in control” and determined to hurt more officers.

Brown confirmed a report that Johnson had insisted on speaking to a black police negotiator, but said that Johnson initially did not believe the cop was black.

“It didn’t matter if he was black, because he was shooting at us,” said Brown, who is also African American. “It did not lead to any kind of peaceful resolution.”

He said the shooter, apparently wounded, wrote in his own blood on the walls of the parking structure, including the initials “RB.” Brown said police have not made sense of the messages.

The chief said the protest had initially been planned as a “static” rally, not a march and that his officers had needed to scramble to clear intersections once the protesters began a spontaneous walk through downtown Dallas.

Because they had not planned on a march, they had not made security precautions along the route, the chief said.

Johnson took advantage, anticipating the route of the march and taking a position in a high building.

“We were not planning on blocking streets. We had to scramble to block intersections, which did expose our officers to this attack,” Brown said, adding that Johnson changed positions to shoot from different angles, “almost triangulating our officers with this rapid fire.”

He said that Johnson planned to use those military-style tactics, which proved especially deadly: “We don’t normally see this kind of moving and shooting from criminal suspects.”

“They were in a funnel,” the chief said of his officers. “It ended up being a fatal funnel.”

“They did things that day that are just hard to describe,” he said. “We are learning that officers that day exposed themselves to draw fire so they could see what floor the shooter was on.”

Brown said Johnson was protected behind a brick wall and that police had no chance to get a shot without exposing themselves.

Before giving a news conference at the scene on Thursday, Brown said, he had told his staff to come up with a plan for dealing with the sniper; 15 minutes later, they proposed the robot, which Brown said was armed with a pound of C4 explosive.

“I approved it, and I’d do it again if presented with the same circumstances,” he said, adding that he had no patience for a debate on whether using the robot presented an unwise escalation in police tactics.

He said investigators were still analyzing Johnson’s cellphone, computer and journal and hadn’t ruled out the possibility that Johnson had had help.

Hillary Is a Disaster for Both America and Israel