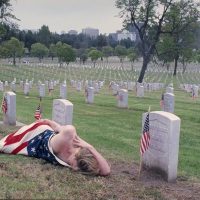 In a move that represents a first for the organization in the 2016 political campaign, the National Rifle Association has released a video endorsing Donald Trump for President. The spot centers around Mark “Oz” Geist, a veteran of the Marine Corp who worked in security for Benghazi during that debacle. In the ad, Geist is seen walking through Arlington National Cemetery, lamenting “A lot of people say they’re not going to vote this November because their candidate didn’t win.” Indicating towards the countless graves of fallen US soldiers, he continues, “I know some other people who won’t be voting this year either.”

It’s a poignant, powerful piece, and a timely production by the NRA. Gun rights in this country are under attack. The most recent example is seen in Governor Jerry Brown of California, who has signed into law several harsh new gun control laws affecting the state’s residents. Among other things, the legislation bans high-capacity magazines, deliberately requires that certain kinds of firearms be more difficult to reload, and even places new restrictions on lending guns to members of one’s own family. It’s the latest attack on Second Amendment right by Brown, the governor of a state with a reputation for having the nation’s most repressive, draconian gun laws already. The NRA has already criticized him and the California state legislature for doing this in the immediate aftermath of the mass murder that took place in Orlando, Florida, accusing them of exploiting that national tragedy for political gain. Amy Hunter, a spokeswoman for the NRA’s Institute for Legislative Action in California, said it best: “These bills make no one safer; they only add another layer of laws that criminals will continue to break.” Well said, though she perhaps also should have mentioned what else they accomplish: making gun ownership more tedious and difficult for law-abiding citizens.

But since Governor Brown seems so concerned with the horrific event, let’s talk about Orlando. What happened in that city was a terrorist attack, carried out by an ISIS sympathizer – that is to say, an Islamic extremist. He is the kind of person who had a warped belief that his own death would be rewarded and who never had any hope or desire of coming out alive. In other words, if he hadn’t been gunned down by police after murdering so many innocent people, he would have been just as happy to detonate an explosive suicide vest. Assuming, of course, that new anti-gun legislation would have somehow been effective in keeping a criminal eager to break murder laws from circumventing firearms regulations.

Yet these are the kinds of awful tragedies that Democrats love to point to and call “gun violence”, holding them up as evidence that we clearly must squash Americans’ God-given Second Amendment rights. President Barack Obama, who has been known to actually cry when discussing these attacks, refuses in most cases even to utter the phrase “Islamic Terrorism”. It’s as if he refuses to acknowledge that there could be anything going on in this country besides a bunch of random criminals resentful over their own personal lives and shooting innocent people out of frustration. Certainly, it could not be that we are under attack by religious zealots intent on destroying us and our society.

In a rare response to those who criticize him for avoiding talk of Islamic terror, in fact, Obama wondered aloud what would be changed if he did. Would it reduce the incidence of the attacks, he asked, or bring back any of the people who have died in those attacks? No, Mr President, it wouldn’t do any of those things. Instead, it would allow us to collectively confront the threat that we as a nation face, by standing united in calling it by its name. It is a long-standing tenet of war – and make no mistake, we are at war with Islamic extremism – to “know thy enemy”. If we pretend we’re fighting a band of street thugs within our own nation, rather than a well-organized extremist cult from afar with no fear of death, we are doomed to defeat.

And to continue addressing the President: Actually, sir, while nothing can bring back our fallen innocent, making so that fewer of them must die in the future is your job. You are the head of the executive arm of the federal government, and one of the few things which the federal government should do is to protect the American people – to “provide for the common defense”, to quote the Constitution. And yet, apparently, we cannot expect such defense, neither from you nor from your administration. This was made shockingly clear during Hillary Clinton’s term as Secretary of State, when she ignored repeated requests for additional security from the American embassy as Benghazi, resulting in loss of American life. Secretary Clinton failed in Benghazi. Clinton failed all of us, but most importantly she failed the people who died because of her inaction. Yet despite ongoing congressional investigations, rather than being punished for her dereliction of duty, she is the presumptive Democratic nominee, and has a real shot at becoming our next President.

I Liked My Health Plan...And Now It’s Been Cut.