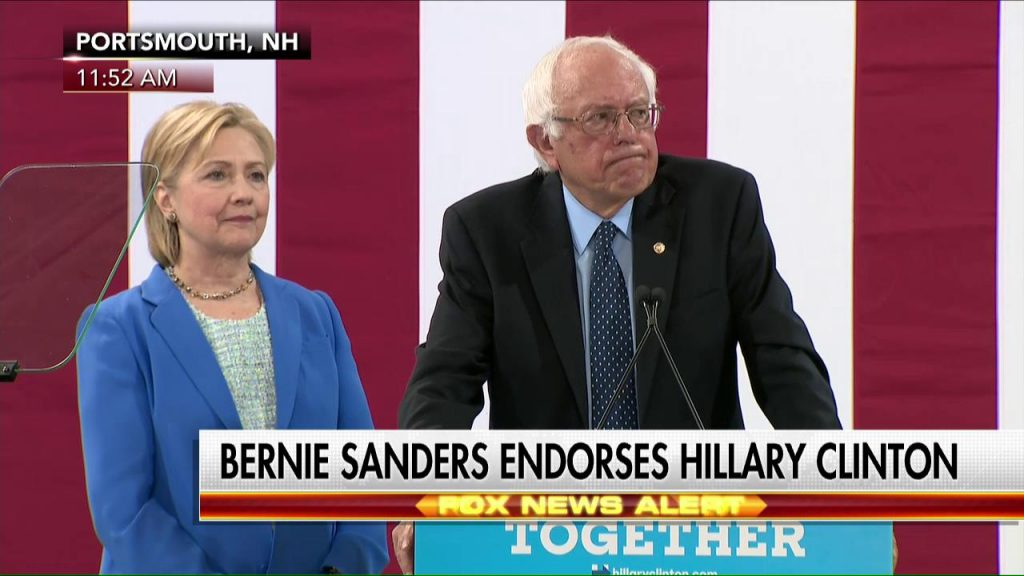 Sanders added, “I have come here to make it as clear as possible as to why I am endorsing Hillary Clinton and why she must become our next president.”

Hillary clinched the Democratic nomination after winning the California primary in early June, but Sanders refused to concede the race, promising to fight on until the Democratic Convention in Philadelphia this month. His holdout of an endorsement came with a fight, a strategy to remain relevant in the news cycle to advance his progressive priorities during the Democratic Party platform committee that was held over the weekend in Orlando, Florida.

”It is no secret that Hillary Clinton and I disagree on a number of issues,” Sanders declared. “But I am happy to tell you that at the Democratic Platform Committee, which ended Sunday night in Orlando, there was a significant coming together between the two campaigns and we produced, by far, the most progressive platform in the history of the Democratic Party.”

Sanders added, “Our job now is to see that platform implemented by a Democratic Senate, a Democratic House and a Hillary Clinton president — and I am going to do everything I can to make that happen.”

According to a Sanders’ supporter who was in attendance during the weekend platform meeting told PolitiChicks the platform pushed by the Vermont Senator such as increasing the federal minimum wage to $15, universal public health care, and free public college tuition were met with a success. Such step towards merging both viewpoints included Hillary agreeing to adopt some elements of Sanders’ plan. However, Sanders failed to win support in blocking TPP, a major issue that emboldened his campaign. Additionally, there is no mention of fracking or any language regarding the issue of denouncing the Israeli settlement.

Appearing side-by-side, Hillary urged Sanders’ supporters to join her campaign as they head to a general election race against GOP nominee Donald Trump. She began her remarks by exclaiming unity now that her former rival are now on the same side.

“I can’t say how much more enjoyable this election is going to be now that we are on the same side,” Hillary said after Sanders spoke. “Now we are joining forces to defeat Donald Trump and together build a future that we can all believe in.”

However, Sanders supporters didn’t agree, often times during the rally chanting “Bernie, Bernie,” while Hillary spoke with some leaving the venue as well. Prior to Sanders’ remarks, New Hampshire Senator Jeanne Shaheen was often interrupted by chants of “Bernie,” while many booed and shouted “No!” when she said “we need to elect Hillary.”

According to a recent Reuters/Ipsos polling, only about 40% of Sanders backers state they would back Hillary, and telling by the crowds reaction during the endorsement and after, making it clear she still had a lot of work to do in order to win come November. During his remarks, Sanders reminded Hillary of the millions of Americans, mostly independent and younger voters had rejected her.

“Let me begin by thanking the 13 million Americans who voted for me, during the Democratic primaries,” Sanders said. “Our campaign won the primaries and caucuses in 22 states, and when the roll call at the Democratic National Convention is announced, it will show that we won almost 1,900 delegates.”

In a statement sent out during the remarks, the Trump campaign said Sanders was now officially part of the rigged system he had criticized during the long primary battle with Hillary.

“Bernie’s endorsement becomes Exhibit A in our rigged system — the Democrat Party is disenfranchising its voters to benefit the select and privileged few,” Stephen Miller, Trump’s senior policy adviser said in the statement.