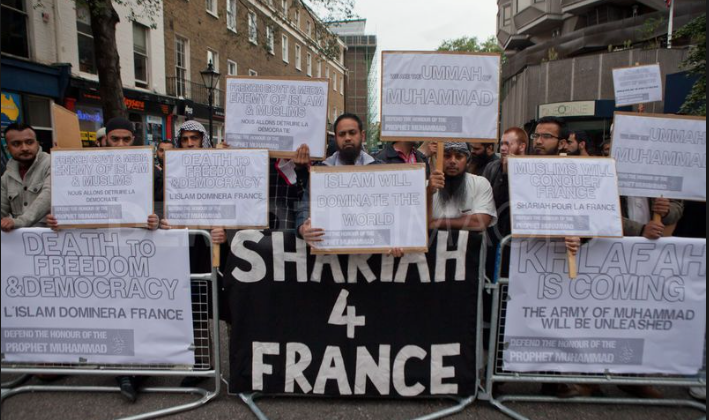 To clarify the title, I would like to say ‘au revoir’ to la France…but I don’t think there will be any ‘revoir’ (or ‘see again’). France is done.

They’re under attack in a one-sided war waged against their civilians, their culture, their heritage, their religion…by an enemy that lives within their walls and whom they are committed to support, educate, and bestow with every ‘human right’–including the right to vote and determine the future makeup of their government.

Has any country ever, in the course of human history, done this for sworn enemies who freely murder and torture their people in their streets?

The civilized world, across the board, is perpetrating this suicidal insanity upon itself for Islam. It was a stroke of 7th century genius to call the Islamic system for constant war and bloodshed in violent pursuit of world domination, a ‘religion’.

Because of this one term of utterly false advertising, all western nations render themselves defenseless against it. Even worse than defenseless: many on the left, in particular, become its greatest facilitators and advocates.

It’s too late for France to do anything to save itself. It’s allowed the flooding of its small country with so many Muslims, it will never find the courage to deport them. And if it doesn’t deport them, the Muslims will be at perpetual war against the French, everywhere, at all times, so that the French people will never know when or where an attack will hit them next; they will never be safe, never feel secure. And soon enough, the burgeoning Muslim population will overwhelm them in numbers, and the entire country will fall under Shari’ah, making it so dangerous and unpleasant for ‘infidels’ that the French will be forced to surrender and convert to Islam en masse.

We’ve seen this happen to so many other nations and civilizations before over the past 1400 years. We should have seen this coming.

But we in the west were blinded by our fear of doing to someone else what Europe did to an honest-to-goodness religious group–the Jews–who were not hurting anyone. And instead of taking the lesson from this that one needs to face what’s true, the lesson instead became not daring to think anything bad–even if it’s true–about anybody else’s “religion”. Even when this totalitarian political death-cult is destroying us, raping our girls, and murdering our children. What self-abnegating fools we’ve become.

So goodbye France. A Dieu–or should I say, ‘a Allah’. The rest of Europe, and the rest of the once-free world, are next. Unless we wake up FAST.