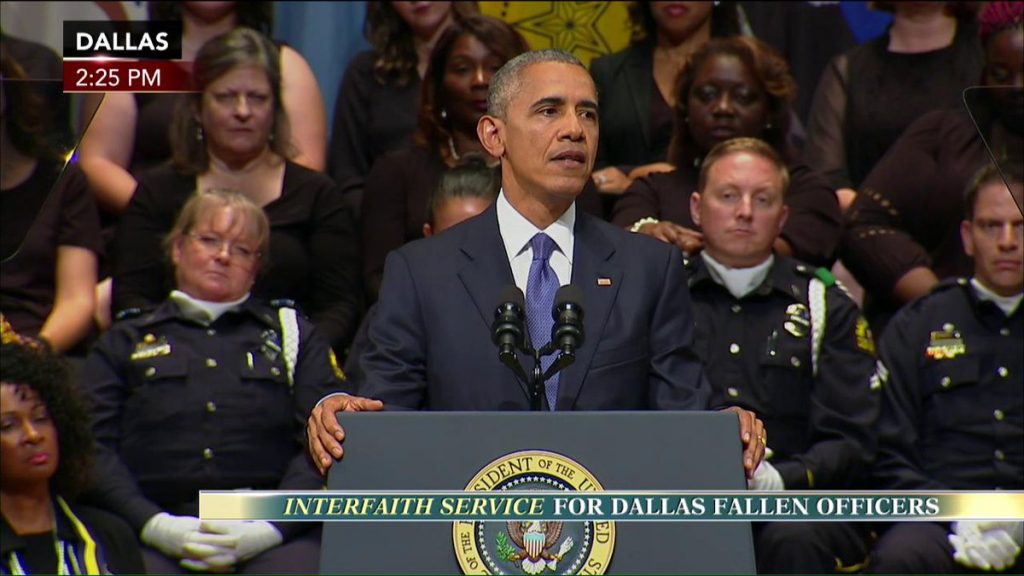 At an interfaith memorial service for the five slain police officer in Dallas, President Barack Obama praised law enforcement for serving and protecting society, but expressed discontent over prejudice he believes occurring in police department nationwide.

“When African-Americans from all walks of life, from different communities across the country voice a growing despair at what they perceive to be unequal treatment, we cannot simply turn away and dismiss those in peaceful protest as trouble makers or paranoid,” President Obama said. “America, we know that bias remains. We know it. None of us is entirely innocent. No institution is entirely immune. And this includes our police departments.”

Even though Obama paid most of his tribute to law enforcement throughout his prepared remarks, several points of his address became political in terms of poverty, gun control and racism.

“As a society, we chose to under-invest in decent schools,” Obama said. “We allow poverty to fester so that entire neighborhoods offer no prospect for gainful employment. We refuse to fund drug treatment and mental health programs.”

On gun control, Obama made a subliminal remark to imply a need for change in Texas decade old open carry laws.

“We flood communities with so many guns that it is easier for a teenager to buy a Glock than to get his hands on a computer or even a book,” he said.

When praising the police in Dallas and around the country, Obama gave the respect and tribute, echoing the same tone Chief Brown said in a recent remarks in regards to how society ask too much from law enforcement.

“So much of the tensions between police departments and minority communities that they serve is because we ask the police to do too much and we ask too little of ourselves,” Obama said. “We know there is evil in this world. That’s why we need police departments.”

He continued on by calling for Americans to unite in order to move forward towards a better country.

“Hope does not arise by putting our fellow man down. It is found by lifting others up. And that’s what I take away from the lives of these outstanding men,” Obama said. “The pain we feel may not soon pass. But my faith tells me that they did not die in vain. I believe our sorrow can make us a better country. I believe our righteous anger can be transformed into more justice and more peace.”

Dallas Police Chief David Brown prior to introducing President Obama expressed love for the fallen officers by using musician Stevie Wonder lyrics. “So today, I’m going to pull out some Stevie Wonder for these families,” Chief Brown said. “We all know sometimes life’s hates and troubles can make you wish you were born in another time and space …  I’ll be loving you always and there is no greater love than this. That these five men gave their lives for all of us.”

Former President George W.Bush, who lives in Dallas also gave remarks, calling for unity amongst Americans for what he stated is the values of this country. 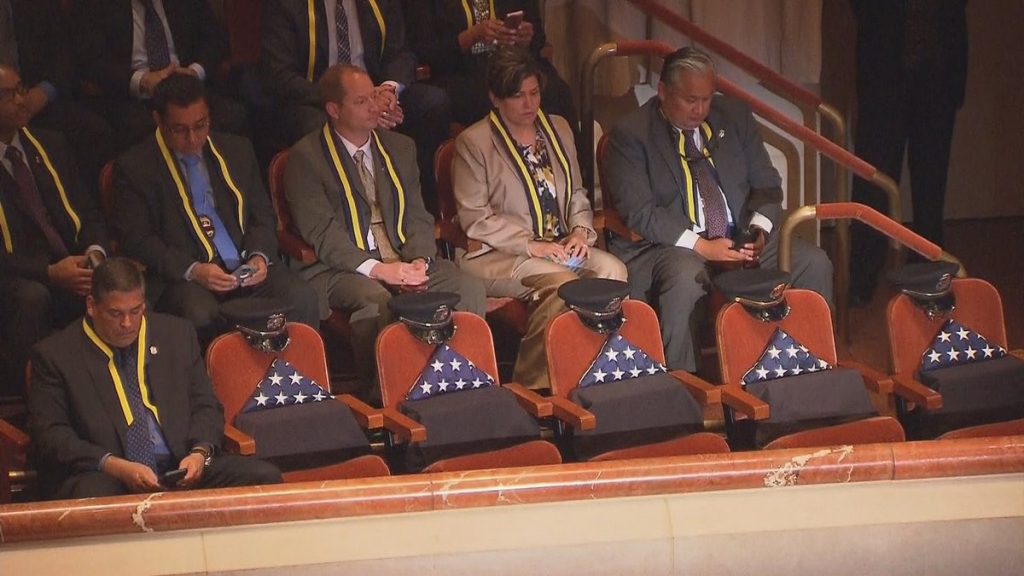 “With their deaths we have lost so much we are grief stricken heartbroken and forever grateful,” Bush said. “These slain officers were the best among us. Most of us imagine that if the moment called for it, we would risk our lives to protect a spouse or a child. Those wearing the uniform assume that risk for the safety of strangers.”

Five Dallas officers were killed last Thursday while standing guard as hundreds of people protested the killings of two black men in Louisiana and Minnesota earlier in the week. The slain officers were Mike Smith, 55; Lorne Ahrens, 48; Michael Krol, 40; Brent Thomson, 43, and Patrick Zamarripa, 32. A tribute to each of the five fallen officers of five empty chairs with a folded American flag were put on display during the memorial service.

Nine other officers and two civilians were also wounded.