The Brits have spoken! They voted to bring their representation closer to home. They are saying “NO!” to being ruled by a corrupt centralized government which was becoming more overbearing than they were willing to put up with. Globalists everywhere are quaking in their boots as those that they rule have decided to diminish their power. Now is the time to force DC to reassess their stranglehold on the States. Are we sovereign states or must we genuflect to the micromanagement of the lords in Gotham…er… DC? Brexit should challenge the normal passive thought and inspire you towards a sense of freedom and adventure! 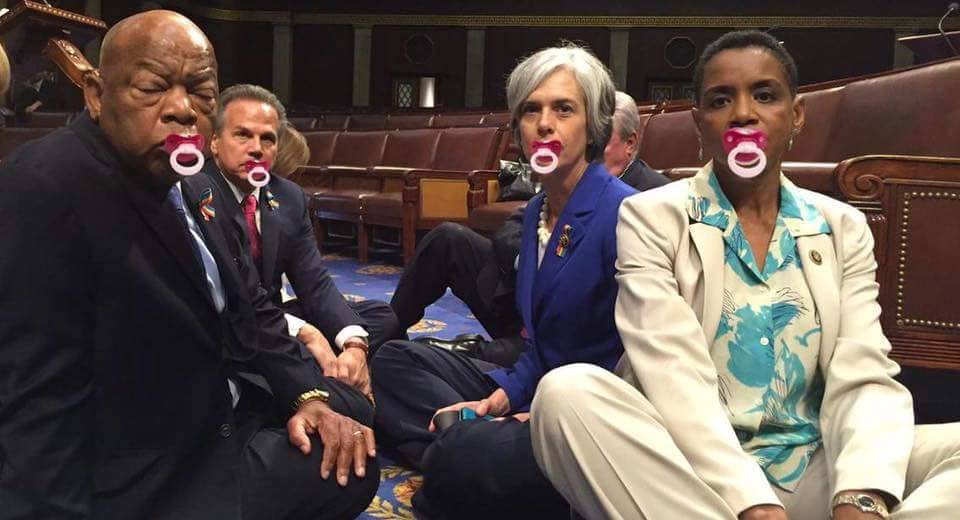 We have Congress, so-called representatives of the people, currently having a public sit-in because they want to disarm law-abiding citizens. No. I do not consent. These people are obviously idiots! They are mentally and spiritually inept. They are incapable of making sane decisions. The Republicans don’t dial it back either, so I am not counting on them to dismantle the slave towers. The thousands of pages of Obamacare alone makes it impossible to follow the rule of law. The lords of DC have consistently voted for more debt, more restrictions, more lunacy. I want a better future, not fear of government, for my children and grand-children. I want my children to be free from the rule of the tyrants in DC.

If Great Britain can do this, surely Oklahoma and Texas have enough spine to have this conversation! Who knows? Maybe just the threat of (fill in the state)-exit would slow down the globalists.

My friend, Mark Kreslins, has been talking about this for a while. I highly recommend his radio show from 6-8 a.m. Central time at http://veritasradionetwork.com/

Imagine in this new confederation of 6 States the absence of the IRS, TSA, HHS, DHS, EPA, Dept. of Agriculture, Department of Education, Obamacare etc. Imagine not needing to worry about being harassed, threatened, jailed or even murdered by these agencies in the event you ever get crossways with them. Kinda sounds like these words in the Declaration of Independence:  “He has erected a multitude of New Offices, and sent hither swarms of Officers to harrass our people, and eat out their substance.”

I hope by now it is clear for all to see that the progressive and dare I say certain libertarian factions and ideologies have won the culture war in these United States. Sadly, my fear is that most “conservatives” and “conservative Christians” still believe there’s a last stand somewhere and that victory is still within reach. They seem to still believe a “conservative” republican can save the day. Thus, they press forward blindly against the reality that traditional values they so dearly hold to (but not always practice themselves) have been totally rejected by this post-Christian relativistic culture in the 21st century.

The data is clear and is illustrated by a recent May 25, 2016 Barna Report pull quote: 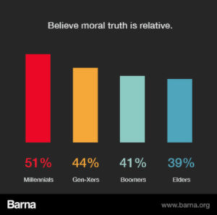 “Much less widespread, however, is consensus on morality itself. What is it based on? Where does it come from? How can someone know what to do when making moral decisions? According to a majority of American adults (57%), knowing what is right or wrong is a matter of personal experience. This view is much more prevalent among younger generations than among older adults. Three-quarters of Millennials (74%) agree strongly or somewhat with the statement, “Whatever is right for your life or works best for you is the only truth you can know,” compared to only 38 percent of Elders. And Millennials (31%) are three times more likely than Elders (10%) and twice as likely as Boomers (16%) and Gen-Xers (16%) to strongly agree with the statement.” – The End of Absolutes: America’s New Moral Code

This is alarming by any measurement and evidence that we’ve arrived at the moral relativistic nirvana only dreamed of in the 1960’s. Of course the next question is typical; what, if anything, can we do? Those of us who consider ourselves moral absolutists, in other words, we embrace a transcendent truth whose origins are found in the Divine now must ponder if there are even options left or are we to just accept fate as it is?

I certainly think it is naive to believe that what was a more wholesome culture in the 18th and 19th centuries can be restored in the 21st century in what people consider the American “nation.” The data regarding a moral collapse against a restoration is overwhelming in that regard:

You and I both know the above list represents but a tiny number of oppressive actions by the bipartisan corrupt, morally bankrupt national masquerading as a federal government. Can I get an Amen!

So if there are no easy solutions to the mess we’re in, are there any hard ones? I will tell you unequivocally…YESxit! Get it? The hint is in the word “xit.”

Just as the Brits are having a mature discussion among themselves about whether or not it is a net gain or net loss for them to stay in or secede from the European Union, so to do we need to have an equally mature discussion about some States seceding from the United States. Let’s be honest here friends, there’s nothing “United” about these States. We’re a wildly divided country on many fronts from politics, to religion to lifestyles and it does no one any good to pretend there’s some unifying set of principles we still hold to. If so, please email me at [email protected] and list these supposed unifying principles.

So what I propose is a mature discussion about:

These are just the facts friends. If the people of these six States had a mature discussion about “exiting” the Union of 50 States because it was a net gain for them culturally, economically, and spiritually, and then did it, they would immediately become the 7th most powerful economy in the world…just behind France.

On top of that, these 6 States would have all the energy, agricultural, and business resources necessary to thrive. Add to that deep water ports so that trade could continue between other world markets as well as the former United States and what’s not to like? Not to be forgotten would be the loss of former federal regulatory burden on businesses, trade agreements that harmed corporations in these States, treaties that previously bound us to military defense that may not be in our interests and again I ask, what isn’t to like and at least consider?

Finally, imagine in this new confederation of 6 States the absence of the IRS, TSA, HHS, DHS, EPA, Dept. of Agriculture, Department of Education, Obamacare etc. Imagine not needing to worry about being harassed, threatened, jailed or even murdered by these agencies in the event you ever get crossways with them. Kinda sounds like these words in the Declaration of Independence:

“He has erected a multitude of New Offices, and sent hither swarms of Officers to harrass our people, and eat out their substance.”

That and a few other complaints were enough for them to “exit” England…how can what we face from the bipartisan corrupt, morally bankrupt national masquerading as a federal government not lead us to discuss “exiting” the United States?

Don’t be fearful of these types of discussions friends; there’s nothing immoral, treasonous or sinful about them. In fact, as Scotland in 2014, the United Kingdom in 2016 and Catalonia at some point in the future demonstrate for us; these discussions are sometimes necessary. Ask the citizens of Poland, a unified East Germany, Latvia, Lithuania, Estonia and many other former Soviet Republics if it’s been a net gain for them to have “exited” the Soviet “Union.” Don’t let nostalgia, fear, or laziness prevent you from thinking like the free person you’re supposed to be.

If you do, then the federal noose around your neck and shackles around your ankles will just grow tighter. Alternatively, by following the example of the Brits, we might actually be able to create something wonderful and try to hold it as long as we can.

“They tell us, sir, that we are weak; unable to cope with so formidable an adversary. But when shall we be stronger? Will it be the next week, or the next year? Will it be when we are totally disarmed, and when a British guard shall be stationed in every house? Shall we gather strength by irresolution and inaction? Shall we acquire the means of effectual resistance, by lying supinely on our backs, and hugging the delusive phantom of hope, until our enemies shall have bound us hand and foot? Sir, we are not weak if we make a proper use of those means which the God of nature hath placed in our power. Three millions of people, armed in the holy cause of liberty, and in such a country as that which we possess, are invincible by any force which our enemy can send against us. Besides, sir, we shall not fight our battles alone. There is a just God who presides over the destinies of nations; and who will raise up friends to fight our battles for us.”

James Patrick Riley: Why Did The Lord Say 'Fear Not'?