“The most hateful griefs of all human griefs is this, to have knowledge of the truth but no power over the event.” ~Herodotus, The Histories 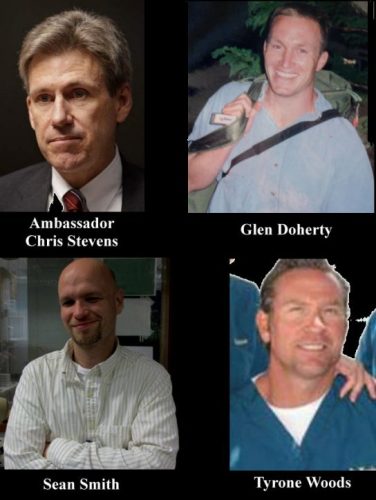 In the immediate weeks following the attack Barak Obama, Hillary Clinton, Administrative staff, spokespeople and much of the mainstream media blamed what happened on a You Tube movie.  In the aftermath of initial information coming out it was apparent that the Obama administration and Clinton State Department acted in a criminally negligent way in dealing with the Libyan uprising and Benghazi attack.

In the weeks afterwards Obama and Secretary of State Clinton continued to lie about the attack being caused by a video, even so far as to use tax payer money to make an ad for Pakistani TV condemning the video. And worse, continued the lie as the coffin draped bodies of 4 Americans came home. Clinton even lied to the families.

Over the past four and a half years many people have been trying to get to the truth of what happened that night.  I am one in hundreds who have spent  nearly 4 years investigating, informing and begging Congress to do something to bring some kind of justice for the horrible situation which our government created and made a mockery out of.

In a little over two years I wrote twenty articles specifically about Benghazi and others which tied what happened in Libya, and the 13 hours before, during and after the Benghazi attack with the growing threat we now have from ISIS.  From everything such comparing the media’s coverage of Nixon and ignoring Benghazi, Libya as a stage for gunrunning,  talking points changed, and waiting for #JusticeForBenghazi4 one year later.

Finally, back on January 18 of 2013, Congressman Frank Wolf of Virginia introduced a House Resolution to establish a 19-member select committee to investigate and report on the attack. I was elated, yet even then there were serious questions which needed to be asked about others who had investigated the attack.  By this time there was evidence that Hillary Clinton may have lied about gun running and theft of weapons which had been stockpiled after Qaddafi’s fall, and the cover up of CIA presence in Benghazi.  There were also many false accusations by Democrats of politicizing the attack.

Now, after two years of intense investigations, Congressman Trey Gowdy and others on the Select Committee have released their report on what happened in Libya, which left 4 Americans dead and other’s lives changed forever.

“The administration’s resistance to this Committee has been especially troubling. The families of the four Americans murdered in Benghazi and the American public deserves to hear the whole truth in a timely fashion.

The same government that asked J. Christopher Stevens, Sean P. Smith, Glen A. Doherty and Tyrone S. Woods to serve selflessly and sacrificially delayed and obstructed an investigation into what happened in Benghazi before, during, and after their deaths.”

From Part 4, concerning Clinton’s e mails, “It was not merely Congress and the people it represents who were misled and manipulated, the State Department and the Secretary’s email arrangement undoubtedly delayed access to information on what happened to four brave Americans in Benghazi and the government’s response before, during and after the attacks. The manner in which the Secretary communicated during her tenure, the manner in which those records were housed during and after her tenure and the manner in which the public record was self-scrutinized and self-selected makes it impossible to ever represent to the families of those killed in Benghazi that the record is whole.”

“The Committee’s interest in the Secretary’s emails is limited to their relevance in the investigation of the Benghazi attacks. Her exclusive use of non-official email and a private server for all official communications may raise concerns beyond the scope of this Committee’s purview related to Federal records and transparency laws and national security concerns, but jurisdiction for those matters lies either with the Inspector General, the courts, other committees of Congress, or the Federal Bureau of Investigation and the Justice Department.”

From Part 5 which proposes 25 recommendations for the Pentagon, State Department, and Intelligence Community, includes,

Provisions for a central planning and coordination mechanism (likely within an existing entity) for interagency threat assessment and tracking for “force protection” of U.S. facilities abroad as well as planning, operations, and response to potential attacks.

Considering the fact that Hillary Clinton selected her good friend Thomas Pickering to head the State Department Accountability Review Board the next recommendation is clearly needed:

Law governing Accountability Review Boards [ARBs] should be amended to limit the influence of the Secretary of State and offices with potential conflicts of interest in the selection of members and to provide for broader distribution and reporting to Congress with respect to ARB reports or significant findings therein.

Considering the amount of disinformation given and cover ups perpetrated throughout the years since Benghazi, the next recommendation is completely justifiable:

Finally, considering the incredible circumstances which may have led to the attack, the broader foreign policies in the Middle East under the Obama Administration, and the disastrous effects since,

The Executive Branch should provide Congress with a clear statement of intentions, rationale, plan and strategy (including objectives, contemplated method of execution, and contemplated completion strategy) when entering into major new overseas engagements. Such a statement should also state contemplated results and potential consequences of major initiatives.

As for obstruction, stalling, lying and obfuscation by numerous people and agencies during the investigations led by the Select Committee,

House and Senate rules should be amended to provide for mandatory reductions in appropriations to the salaries of federal officials held in contempt of Congress.

Congress should consider strengthening enforcement authorities and penalties under the Federal Records Act related to the use of non-official email accounts and non-official file-hosting services for official purposes.

So, where do things go from here?

“The Select Committee intends to convene a bipartisan markup to discuss and vote on the proposed
report on July 8, 2016. All members of the committee will have the opportunity to offer changes in a manner consistent with the rules of the House.”

The full report can be read here.

So, what was I expecting to result from the past year’s Select Committee investigation; surely, not justice in a country whose daily progressive slogan is Social Justice Now?  After all, true justice consists of equity, impartiality, objectivity, neutrality, honesty, righteousness, morals, and morality.

Less than 2 years after the attack State Department Spokesperson Victoria Nuland and US Ambassador to the UN Susan Rice, both of whom covered up and lied about the attack, repeatedly blaming it on a video were given promotions.

In Nuland’s case, changing e-mail talking points and covering up the Al Qaeda connection, landed a cushy job as Assistant Secretary of State for European and Eurasian Affairs for the State Department.  She’s most notably known for her meddling in the Ukraine by supporting Neo Nazis and delivering weapons during the uprising against Russia.

In Susan Rice’s case, going on the Sunday Morning show circuit and purposely misleading by blaming the violent attack on the video, knowing that it was a terrorist attack was actually considered as Clinton’s replacement as Secretary of State, but due to the Benghazi ‘mishap’ that idea was quickly shelved and she was awarded with a position of National Security Adviser instead.

As for Obama, while the bumps in the road have been laid to rest for nearly 5 years, if he doesn’t focus on a daily polishing of his Nobel Peace Prize and planning his Presidential Library, maybe he’ll apply as Secretary General of the UN. Who knows. Or maybe we’ll be lucky and he’ll stop lecturing Americans on how horrible we are.

And then there is Hillary “What difference at this point does it make” Clinton.  She knew of terrorist training camps in the area and yet she ignored repeated requests by Ambassador Stevens’ for extra security. The woman lied to the families, and she lied to America.  And she also may have lied during her testimony before Congress—and yet she may be soon awarded in the most extraordinarily incomprehensible way.

It is reprehensible that the woman who lied during the Watergate investigation which brought down Richard Nixon, and whose husband lied to the American people about certain dalliances during his presidency, may possibly be promoted to Commander in Chief over the US Military whose takes the words “Never Leave a Man Behind” seriously.

Three and a half years ago I knew Justice wouldn’t come easy, but I guess I held out hope for some.  Maybe another thing I was expecting was a sense of closure.

I haven’t watched TV for over 10 years now, but some of my favorite shows were those which focused on heroic efforts of law enforcement to solve cold criminal cases. At the end of the shows, you’d see them close the file, and put them in the boxes marked “Solved”.

I know, life imitates art, and art sometimes imitates life, but too often reality means no closure or real justice.  I don’t know what or why I expected anything to come of the Select Committee that other investigations and hearings never produced, but I am grateful for their efforts.

I do thank Congressman Gowdy and all the others who put in so much time and energy into this for the past year, and hope it at least gives some sense of peace to the Stevens’, Smith, Woods’ and Doherty families as well as those who fought so valiantly that night. I just wish our country would care more than to ensure the woman largely responsible will be rewarded for it.