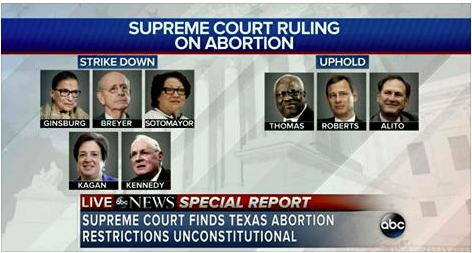 On Monday the Supreme Court voted 5-3 in favor of regulating abortion clinics, striking down a 2013 law that would have ensured women were given quality care with hospital-like standards.  (The case of abortionist Dr. Kermit Gosnell has been cited as one of the reasons clinics nationwide need better regulations.)

One of the first to praise the decision is Hillary Clinton.  From The Blaze:

“By striking down politically motivated restrictions that made it nearly impossible for Texans to exercise their full reproductive rights, the Court upheld every woman’s right to safe, legal abortion, no matter where she lives,” Clinton said.

In Whole Woman’s Health v. Hellerstedt, the high court killed a Texas law requiring doctors performing abortions to have admitting privileges at a hospital within 30 miles of the abortion facility. Proponents of the law argued that the regulations were necessary to protect women’s health and safety; opponents argued that the restrictions placed an undue burden on women seeking abortions.

Clinton said, “Our fight is far from over”

In Texas and across the country, a woman’s constitutional right to make her own health decisions is under attack. In the first three months of 2016, states introduced more than 400 measures restricting access to abortion. We’ve seen a concerted, persistent attack on women’s health and rights at the federal level. Meanwhile, Donald Trump has said women should be punished for having abortions. He also pledged to defund Planned Parenthood and appoint Supreme Court justices who would overturn Roe v. Wade.

“Today’s decision is a reminder of how much is at stake in this election. We need a President who will defend women’s health and rights and appoint Supreme Court justices who recognize Roe v. Wade as settled law,” the statement continued. “We must continue to protect access to safe and legal abortion – not just on paper, but in reality.”

“Breaking News: Supreme Court strikes down Texas abortion law — putting unborn babies across America in grave danger.
Justice Kennedy, appointed by President Reagan, sided against the unborn.
A stark reminder of what is at stake in November, folks.”

“How can decent people look on as SCOTUS sends more women to be butchered by more Gosnells and not speak? ‪#‎LosingDecency‬”