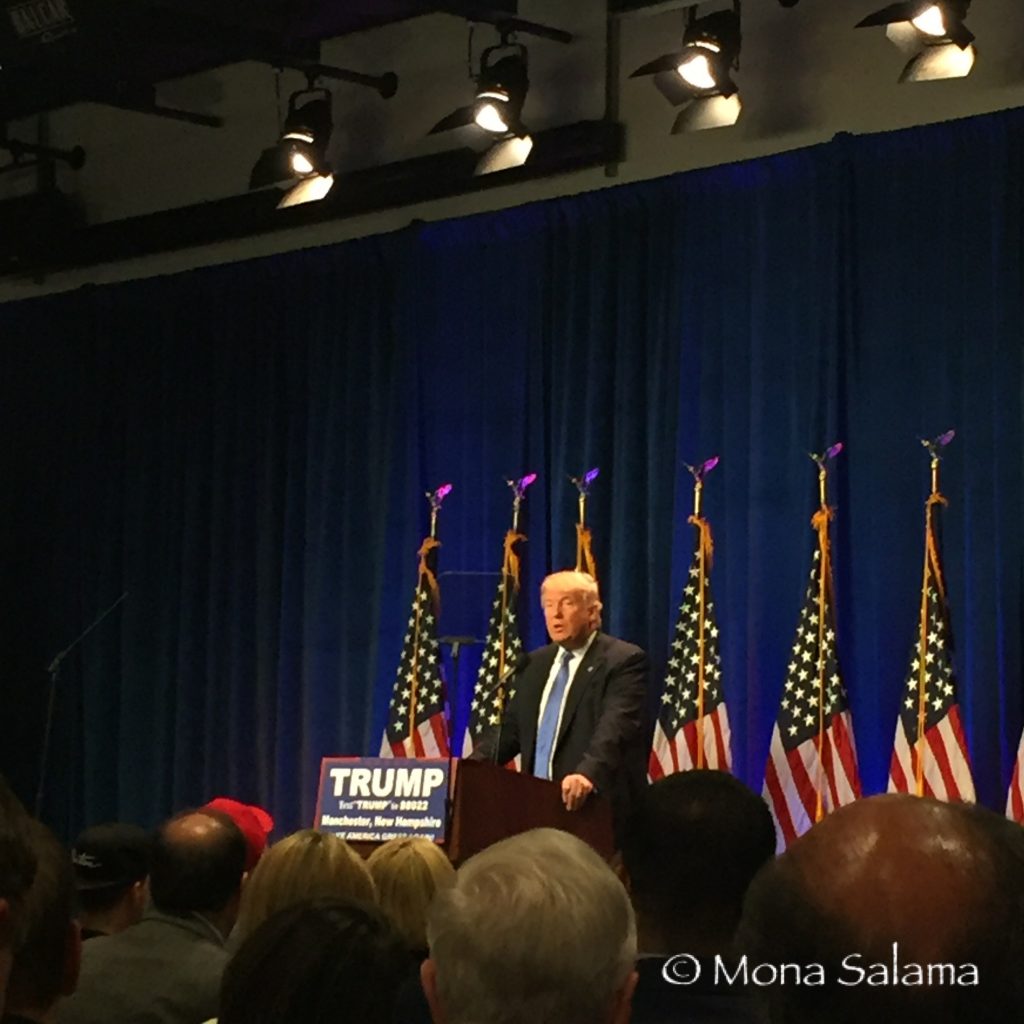 Manchester, NH. — In the wake of the Orlando shooting, presumptive GOP presidential nominee Donald Trump delivered a major speech Monday afternoon, reacting to the massacre by revitalizing his proposal to temporarily ban Muslims from entering the United States.

“With fifty people dead, and dozens more wounded, we cannot afford to talk around the issue anymore — we have to address it head on,” Trump told the small audience gathered at St. Anselm College in New Hampshire. ”
I called for a ban after San Bernardino, and was met with great scorn and anger but now, many are saying I was right to do so and although the pause is temporary, we must find out what is going on. The ban will be lifted when we as a nation are in a position to properly and perfectly screen those people coming into our country.”

Trump would argue that the failed immigration policies from President Barack Obama and Democratic presumptive rival, Hillary Clinton, along with the plans to allow thousands of refugees to enter without a proper vetting system could be the next “bigger version of the legendary Trojan Horse.”

“Each year, the United States permanently admits more than 100,000 immigrants from the Middle East, and many more from Muslim countries outside the Middle East …without any effective plan for our security,” Trump said. “In fact, Clinton’s State Department was in charge of the admissions process for people applying to enter from overseas. Having learned nothing from these attacks, she now plans to massively increase admissions without a screening plan, including a 500% increase in Syrian refugees.”

“This could be a better, bigger version of the legendary Trojan Horse,” Trump added.

In the wake of the San Bernardino shooting in the beginning of December, Trump proposed a controversial call to “total and complete shutdown of Muslims from entering the U.S.” until “our country’s representatives can figure out what is going on.” Many GOP lawmakers as well as his GOP primary rivals called his proposal unconstitutional and divisiveness, as well putting troops and diplomats at risk. His proposal would soften up months later in May when Trump stated the proposal was a “suggestion until we find out what’s going on” during an interview on FOX News radio.

The deadliest mass shooting in U.S. soil and the nation’s worst terror attack since 9/11 occurred early Sunday morning when the gunman, Omar Mateen, gunned down 49 people and wounded 53 in a popular gay nightclub in Orlando, Florida. The shooter was born in New York to Afghan immigrant parents, pledged his alliance to ISIS in a 911 call during the massacre attack. Orlando police shot and killed Mateen after a three-hour standoff.

Returning his calls for a ban on Muslim after the Orlando shooting, Trump called for a temporary ban on areas with a history of terrorism ties, adding the power of the President gives him the ability to suspend entry to protect Americans. “The immigration laws of the United States give the President the power to suspend entry into the country of any class of persons that the President deems detrimental to the interests or security of the United States, as he deems appropriate,” Trump stated. “I will use this power to protect the American people. When I am elected, I will suspend immigration from areas of the world when there is a proven history of terrorism against the United States, Europe or our allies, until we understand how to end these threats.”

The speech on Monday was planned to be a detail informative speech discussing the Clinton’s scandal of both Hillary and her husband, former President Bill Clinton. However, before his remarks, Trump took to twitter to inform followers that his speech would now discuss “terror and the horrible events of yesterday,” and the speech about the Clinton’s would be “discuss at a later time.”

“This was going to be a speech on Hillary Clinton and how bad a President, especially in these times of Radical Islamic Terrorism, she would be,” Trump said in the beginning of his remarks. “There will be plenty of opportunity to discuss these important issues at a later time, and I will deliver that speech soon. But, today there is only one thing to discuss: the growing threat of terrorism inside of our borders.”

However, throughout his 35-minute speech, Trump would repeatedly unleash attacks on Hillary, criticizing her for refusing to say ‘radical Islam,’ as well as her stance on immigration and gun policies. He credited himself for challenging Hillary in saying the words ‘radical Islam,’ after months of refusing to do so. “Hillary Clinton for months and despite so many attacks – repeatedly refused to say the words ‘radical Islam’ until I challenged her yesterday to say the words or leave the race,” Trump said. “Hillary Clinton – who has been forced to say the words today after policies she supports have caused us so much damage – still has no clue what Radical Islam is, and won’t speak honestly about what it is.”

I have been hitting Obama and Crooked Hillary hard on not using the term Radical Islamic Terror. Hillary just broke-said she would now use!

He pointed out to the attacks in San Bernardino and how Hillary explained her reasoning in refusing to say those words. “In fact, just a few weeks before the San Bernardino slaughter, Hillary Clinton explained her refusal to say the words Radical Islam. Here is what she said: “Muslims are peaceful and tolerant people, and have nothing whatsoever to do with terrorism,” Trump said.

On Hillary’s calls for stricter gun control, Trump criticized this solution, by pointing out the Paris Attacks that murdered 130 people was unpreventable to France having the toughest gun laws in the world. “Hillary Clinton says the solution is to ban guns,” Trump said. “They tried that in France, which has among the toughest gun laws in the world, and 130 were brutally murdered by Islamic terrorists in cold blood.”

Trump added, “Her plan is to disarm law-abiding Americans, abolishing the 2nd amendment, and leaving only the bad guys and terrorists with guns. She wants to take away Americans’ guns, while admitting the very people who want to slaughter us.”

In regards to Hillary’s immigration policies, Trump blasted her for wanting immigrants that come from countries that are not only dangerous but also oppress the LGBT community. “Hillary Clinton can never claim to be a friend of the gay community as long as she continues to support immigration policies that bring Islamic extremists to our country who suppress women, gays and anyone who doesn’t share their views,” Trump stated. “She can’t have it both ways. She can’t claim to be supportive of these communities while trying to increase the number of people coming in who want to oppress them.”

“Ask yourself, who is really the friend of women and the LGBT community, Donald Trump with his actions, or Hillary Clinton with her words? Clinton wants to allow Radical Islamic terrorists to pour into our country—they enslave women, and murder gays,” Trump said.

Orlando Terrorist Worked For Company Transporting Illegal Immigrants Inside US; Was Interviewed By FBI 3 Times