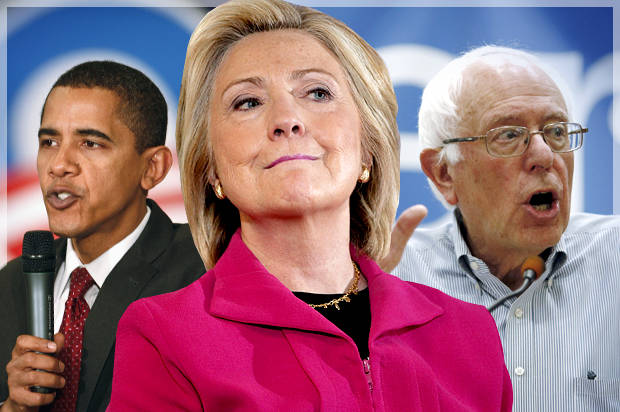 After a brutal defeat in the California Primary on Tuesday, leading to Hillary Clinton securing her position as the presumptive democratic nominee, Vermont Senator Bernie Sanders sat down privately with President Obama to discuss the state of the Democratic race.

The meeting between both men lasted an hour, resulted in Sanders remaining firm to continue campaigning for the Washington, D.C. primary next Tuesday, adding also that the final count of votes in California will show a different story. “I will of course, be coming in the D.C. primary which will be held next Tuesday,” Sanders said to reporters after the meeting outside the White House. “This is the last primary of the Democratic nominating process. I look forward to the full counting of the votes in California, which I suspect will show a much closer vote than the current vote tally.”

“Let me begin by thanking President Obama and thanking Vice President Biden for the degree of the impartiality they established during the course of this entire process,” Sanders said. “What they said at the beginning is that they would not put their thumbs on the scale, and in fact, they kept their word, and I appreciate that very, very much.”

Even though Sanders intends to continue his campaign onwards, he stated he will in the future work with Hillary to prevent Donald Trump from becoming president. “I look forward to meeting with [Hillary] in the near future to see how we can work together to defeat Donald Trump,” Sanders said, warning that a Trump presidency would be a disaster. “I will work as hard as I can to make sure that Donald Trump does not become president of the United States.”

Sanders has been under constant pressure to step aside and unify behind the Democratic party to shift its focus for a general-election showdown with the GOP presumptive nominee Donald Trump. However, Sanders isn’t budging, promising to carry on his fight to Democratic National Convention in Philadelphia next month. He stated before California and five other states voted on Tuesday, a win in the Golden State would convince superdelegates that has given Hillary a cushion push in securing the nomination to flip their loyalty. But Tuesday failed for Sanders, losing California by 400,000 votes, as well as three other states, causing momentum of endorsement to overflow to Hillary since.

President Obama remained impartiality during the course of the Democratic primary, showing no favoritism for either or while he spoke negatively of Trump for months. After Hillary swept New Jersey Tuesday night, which helped her clinched the Democratic nomination, President Obama congratulated both candidates “for running inspiring campaigns that have energized Democrats and brought a new generation of Americans into the political process.” The news of the president to endorse Hillary came last week, only if she claimed the nomination in the final Super Tuesday primary.

Shortly after the meeting, The White House released a video of the president “enthusiastically” backing Hillary. “I don’t think there is ever been someone so qualified to hold this office,” President Obama said in the video of Hillary. “Look, I know how hard this job can be and that is why I know Hillary will be so good at it.”

“She’s got the courage, the compassion, and the heart to get the job done, and I have seen her judgment,” the president said. “I’ve seen her toughness. I’ve seen her commitment to our values up close. And I’ve seen her determination to give every American a fair shot at opportunity, no matter how tough the fight – that’s what’s always driven her, and still does.”

President Obama endorses Hillary: “I don’t think there’s ever been someone so qualified to hold this office.” https://t.co/KetvKoa853

Obama is expected to join Hillary on the campaign trail in the upcoming weeks, with the first campaign stop in Wisconsin on June 15.

America, Land of the Feelings, Home of the Highly Emotional