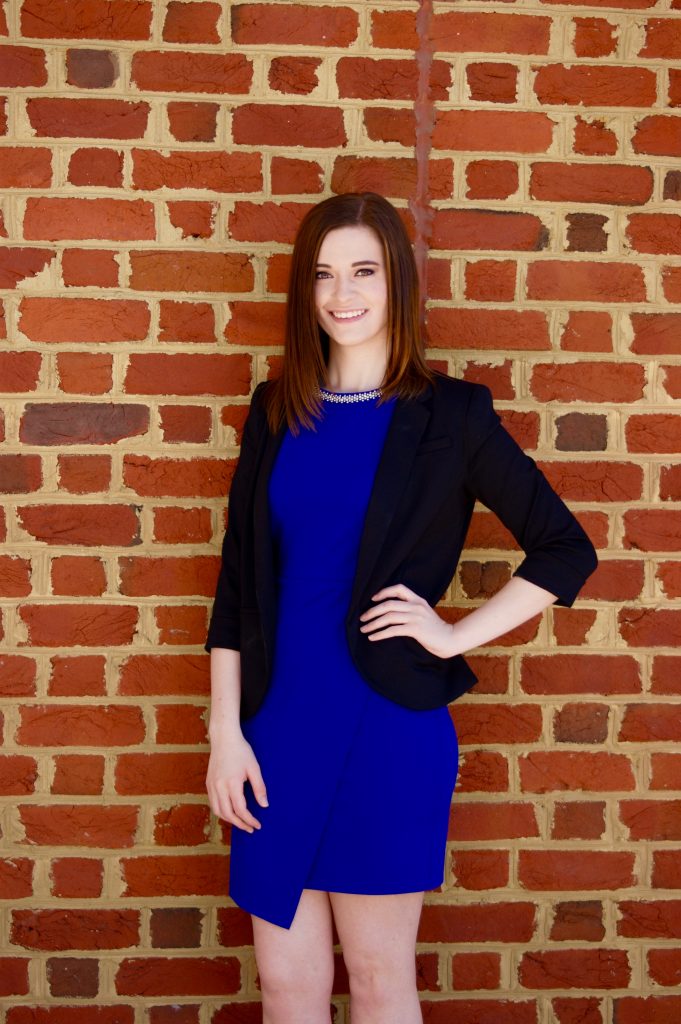 Julia Porterfield is more than a rising star on the frontier of political media, she is a dear friend of mine and mentor as well. Julia is twenty-two years old and recently graduated from Regent University with a B.A. in Politics and History.  Julia has interned with both the Blaze and National Review, and she is the founder and Editor-in-Chief of RedMillennial.com.

I first met Julia about two and a half years ago in an online class at Regent University, we soon discovered that we had similar interests and career goals. Julia friended me on Facebook and we began to get to know each other better. Several months later she invited me to write for Red Millennial, her website which she founded in 2013. Last fall, we both transferred to on campus at Regent and I had the pleasure of getting to know her personally during the past year.

JP: Growing up, my parents always listened to talk radio so I always knew what was going on in the realm of politics, but it wasn’t until the 2008 presidential election that it really peaked my interest. It was during that cycle that I really got interested in journalism and politics.

Q: How long have known you wanted to go into journalism?

JP: When I was little, I was always pretending to be a spy and read the entire Nancy Drew series by the time I was 12 so I guess I’ve always been interested in reading, writing, and investigating. When I was 13-years-old, I was inspired by Rory Gilmore from Gilmore Girls to become a journalist. Never thought I’d stick it out this far.

Q: When and why did you found Red Millennial?

JP: I founded Red Millennial my first year at Regent University. I had a minor in journalism and one of my classes was on blogging so we had to start a blog the first day of class in 2013. I already knew I was interested in becoming a journalist, so I took the project to heart and really went after it. I never would’ve dreamed we’d have the success we’ve achieved today or be as large as we are.

Q: You’ve done more than most people twice your age. What are you working on now?

JP: It’s always been a thought in the back of my mind, but not something I see happening in the immediate future.

JP: I’ve had a lot of people tell me I should, but I think it’s just because I’m a politically active Republican woman. Kind of a rare breed (or so people think).

Q: What is your vision for Red Millennial?

JP: I’d love for it to continue to grow and serve as a voice for conservative Millennials throughout the U.S. After the 2008 election and again now in 2016, people are convinced that all young people are super liberal when that’s not the case. I’d like RM to prove that we exist and that we have a voice that’s demanding to be heard.

JP: Currently, I’m not planning on voting for any party nominee– Republican, Democrat, or Libertarian. I think this is Hillary’s election to lose, but who knows. No one predicted the Trump phenomenon last summer so it’s anyone’s guess what will happen come November.

JP: I don’t think I really have a favorite politician. I have people I admire (Paul Ryan, Marco Rubio, Kelly Ayotte, Nikki Haley, etc.), but no favorites per se.

JP: C.S. Lewis. I loved reading his books when I was younger and I really admire him. Although he became a Christian later on in his life, he wrote extensively on his journey to Christ and I found his work on it really inspiring.

Q: Who are your role models?

Q: Is there any one person or persons who have influenced your career?

JP: There have been so many professors and internship mentors who have really helped guide me, but I would have to say the one person who’s influenced me the most is my mom. She has encouraged my love for journalism from day one. When I was 13 years old, she bought me my first laptop so I could start writing. My mom has always supported me even when I wanted to move halfway across the country for a summer internship. Without her love, support, and encouragement I wouldn’t be who I am today.

JP: It depends on the topic. I usually find that I write my best pieces when I’m passionate about the topic or angered by something that happened.

Q: Who or what do you believe is the current biggest threat to America?

JP: Domestically? The economy isn’t moving and the student debt bubble is growing and growing. Abroad? ISIS, without a doubt.

JP: Find your passion. Whether it’s activism or journalism, figure out what you want to do and give it your all.

Q: What do you think it will take to make America once again that “city on the hill”?

JP: I think a lot of the time we get so consumed with periods in America’s past that we forget that we should be focusing on the future. I don’t think we should try to bring back that era of American history, but focus on what we can do to make America a better nation now.

Q: You get to spend one day in either the past or future. Which do you choose and what is your mission?

JP: Past. Convince Donald Trump not to run for President.

JP: Probably touring Europe with my mom. Neither of us has been abroad, so I’d really like to go with her and be typical American tourist. We always have fun when we travel together.

Q: What is your all-time favorite song and why is it special to you?

JP: I don’t know if it’s my “all-time favorite” but Born Free by Kidd Rock. My first year at Regent was during the 2012 election, and my friends and I went to Romeny-Ryan rallies on a weekly basis. They always played the song as Mitt walked out onto the stage and it’s just sentimental of a time when I really got involved with politics.

JP: I love all four, but probably Texas because they have Whataburger.

Q: What would you tell the young Julia Porterfield’s of the world as the work hard to achieve their dreams?

Lucifer, Lies, and Lust: The Dark Reality of Muslim Paradise