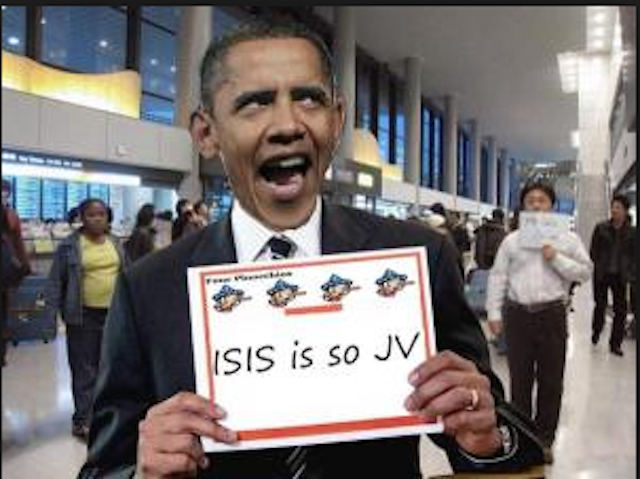 “I think there is a distinction between the capacity and reach of a bin Laden and a network that is actively planning major terrorist plots against the homeland versus jihadists who are engaged in various local power struggles and disputes, often sectarian.” ~Obama during an interview with New Yorker editor David Remnick, where he references ISIS as the JV team. January, 2014

“Our objective is clear: We will degrade, and ultimately destroy, ISIL…” Obama, September 2014

“But what I’m not interested in doing is posing… or pursuing some notion of American leadership, or America winning… or whatever other slogans they come up with… That has no relationship to what is actually going to work to protect the American people, and protect people in the region who are getting killed and to protect our allies and people like France.” Obama, November 2015

As our best come home in coffins draped by our flag, mourned over by those who served with and loved them, and buried as they lived- quietly, professionally, Obama continues his perpetual apology tour.

There’s an old saying that those who forget history are bound to repeat it. Often times that quote is used to warn us so atrocities done in the past will not happen again, but sometimes it’s a reminder of the good, the better things of the past.

A lot of things pointed towards, forward, to the point we are at today in our world. While I try not to give too much credit to any one human for events which happen, there is definitely credit where credit is due.

There have been many people chronicling the events over the recent past, everything which has grown and burned in the world since the so called Arab spring and the rise of Obama to leadership in the U.S.

I know I’m not the only one who has written about the things going on from before Benghazi to the situation now in Syria, where a civil war grew into proxy wars which have enflamed the entire region because of our political leader’s acts and inactions. I’m not the only one who has been watching the Middle East burn, as Obama withdrew from an unstable Iraq and let terrorists swell into the vacuum which remained, or watched as he ordered our troops to train terrorist organizations as well as arming them during a time of war.

Some of the slogans being tossed around over the years suggest that indeed, the future does not belong to those who slander the prophet of Islam- because goodness knows our own leaders, especially Obama, have never uttered a word about Islamic terror except to say Islam has nothing to do with Islamic acts of terror.

While they worry about Islamic terror, one thing they don’t worry about are our troops whom have been fighting these same for the past 13 years while under this administration and the boots that have always been on the ground. They don’t worry about Christians in Iraq, Iran, and Syria or across Africa as the harshest condemnation our White House can think of is the hashtag slogans such as pretty please #BringbackourGirls.

A little over a year ago, I wrote about how two ideologies of Marxism and Islam have come to fruition under Obama:

“Once Obama promised “We are five days away from Transforming America” everything the communists have been working for seemed to be within their reach, and since his first term, our nation has been reeling from an emboldened Marxist push to finish the transformation.

… everything Muslims have been patiently working on through stealth Jihad, has been within reach since his first term and we are witnessing Muslims writing guidelines and training manuals for the FBI, CIA, Pentagon, Dept. of Defense and Homeland Security as if our nation was never attacked by Muslims on 9/11/01.”

It’s not just from Obama, as the ideologies have infected our society, churches and politics for years. However in Obama, the ramifications of transformation he vowed have struck deep. When people heard his vows, they had no idea how much the transformation would affect the rest of the world as well.

The slogans and speeches from the Obamas, the Clintons, and even from many in the Republican Party have proven that they view Middle America and their conservative and constitutional appreciating political counterparts as enemies more than they do radical Islam or any other threat to our nation. And they do it on purpose because they believe it.

The world used to have a term for that, but in our more tolerant, evolved and ever politically correct, sensitive society, one just doesn’t say the words Treason or Traitor out loud.

Obama has equated real and valid concerns of Americans from all walks of life, and our representatives demands that our government do it’s constitutionally mandated job in protecting our citizens from threats from without and within- to doing the terrorists work for them.  He claims, “Prejudice and discrimination helps ISIL and undermines our national security.”

No, Obama.  Arming terrorists; cutting and gutting our military to pre-World War Two levels; removing our forces and leaving handfuls of our best behind to keep things stable while claiming terrorists are “decimated”, “on the run”, and “JV teams”; releasing terrorists from Gitmo; opening our country to millions of un-vetted, military aged Muslim men from terrorist nations; and refusing to call our enemies what they are- Islamic terrorists.  All these things have been done during war, undermining our national security.

And while we’re at it, Mr. Obama, you call those who would prefer to know the backgrounds of those military aged Muslim men “Un-American” and claim we’re bigoted for wanting religious tests… You are the one who has failed to arm Christians in the Middle East while arming Muslims, and it’s your administration that is deporting Christian refugees while lamenting our bigotry over the hundreds of thousands of military aged Muslim men you want to settle in our neighborhoods.

For the record, since 2011, only 53 Christians have been offered refuge in the United States.

The future must not belong to those who slander the prophet- and in Islam, anyone who dares not believe in the prophet of Islam is a blasphemer and an infidel.  Right Obama?

I’m tired of being called a bigot, phobic… and speaking of which, I am not afraid of Islamic terrorist cowards who use and train children and women, who cower behind women and children. I am not phobic of people who may be able to kill the body, for they can’t kill the soul. My soul belongs to my Savior. And lest I am compared to the Taliban or told to get off my high horse, I proudly say Praise the Lord, but I’ll never behead, stone, stab, burn or imprison anyone for not believing in Jesus.

There are millions of square miles of Islamic lands in the Middle East and Africa. If people care so much, why would they not offer to help the refugees settle closer to their homelands, with people who worship and live under the same laws they do? I think we know the answer. One cannot conquer lands that are already conquered.

How about instead of speeches promising to transform our country, and white washing the transformation made across the middle east and Africa, we delve back into history and repeat it?

I’d much rather the encouragement from real men, real leaders, and valiant, uncompromising and full of that sloganish “American pride” than the unveiled elite, globalist, anti-American and yes, anti-Christian rhetoric of our current world leaders.

Let’s go back with Shakespeare: “Cry havoc and release the dogs of war.”

Let’s bring back that fighting spirit of real leaders such as General Patton: “May God have mercy upon my enemies, because I won’t.”

Unleash our best, those who were trained for times such as these, and who love people so much they’re willing to give their lives for peace. Let them loose and watch the cowards of ISIS, al Qaida and every other Islamic terrorist either give up, give in or suffer the ramifications they’ve wrought. Once the world is rid of them, there will be no need for refugees to come here.

Maybe I am a bit Pollyannaish after all.

To Survive, Israel Must Unite