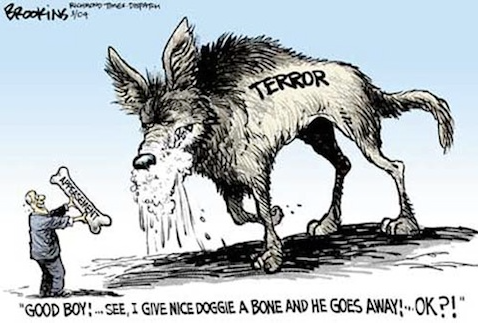 The Obama administration is deeply committed to the proposition that it would be wrong and harmful to identify the jihad threat for what it is. In reality, its politically correct willful ignorance is hamstringing proper analysis of the problem, and endangering Americans.

A report by the Homeland Security Advisory Council released days before the Islamic terror attack in Orlando, Florida, stressed the importance of combating extremism by avoiding terms that might offend Muslims.

A HSAC subcommittee first created by DHS Secretary Jeh Johnson in 2015 published its report on June 9.

Some instructions found in the report include:

“We must speak with honor and respect about all communities within the United States,” the Daily Caller reported Tuesday. “We should give dignity to the many histories and diversities within our nation and advocate for a consistent whole of government approach that utilizes agreed terms and words. Tone and word choice matter.”…