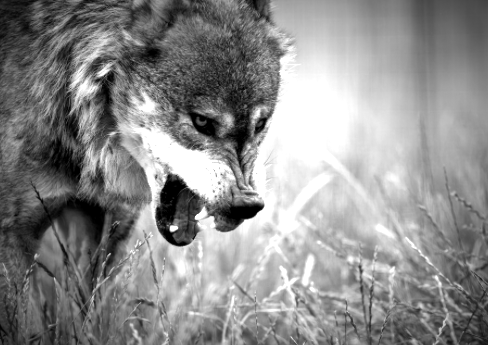 In nature, animals have no conscience and no remorse. We know that they kill to eat and to defend themselves, but in reality they use violence for so much more than just this. Siblings in a pack or litter will often injure or kill one another in an attempt to get more of their mother’s milk for themselves. Parents sometimes murder their own offspring for being the “runt” and therefore a waste of food. And when lone wolves go on the hunt, they choose their targets carefully: no large, powerful animals able to easily defend themselves. Instead, the wolves pick young, sick, or elderly victims, who have a harder time fighting back.
In animals, this is somewhat understandable. They are not morally conscious, and have no sense of right and wrong. People of religious faith may even be of the opinion that ultimately, animals were placed on Earth for the use and benefit of humans, making it unimportant what they do amongst themselves.
In people, however, it’s different. People are endowed with a moral sense, a conscience that tells them when something is abhorrent, when something is wrong. A human being who lacks this essential understanding is no better than – perhaps even indistinguishable from – an animal, and that is a terrifying thought.
Yet that exists – it is the enemy we face here in America. We saw this most strikingly in recent days, in the aftermath of the worst mass shooting in US history. A man – whose name I will not use, nor should anyone – entered a gay nightclub in Orlando and opened fire, murdering some 50 people and injuring even more. He was a “lone wolf”, an enemy agent acting alone, and he chose his target carefully. He went after homosexual people in a recreational setting, pursuing people on the fringe of society when they were at their weakest. From news reports and the work of journalists, we now know that if he hadn’t hit the nightclub, he would have gone after Disney World: a place full of helpless children and other people just trying to have fun. In other words, the weakest he could find.
This should tell us something – and it isn’t, as some in our government can’t wait to blare from the rooftops before the victims’ blood is dry – that we need to surrender our God-given Second Amendment rights (for what it’s worth, the shooter was already in violation of several existing gun laws). No, it’s that we are under attack by an enemy that has no moral center. They ascribe no value to life – certainly not to ours, but not even to theirs. All they care about is killing, and they go after the weakest and least able to defend themselves, in order to terminate them more efficiently and without a shred of guilt or remorse. No wonder: they subscribe to a twisted, hateful ideology that they call Sharia Law. Among other things, this evil doctrine mandates that people who are gay must be killed, apparently by any means necessary.
Lone Wolves are Forced to Hunt Smaller Animals…
They pick sick, younger or older animals who can’t defend themselves well… [unarmed groups of people]
Their solitary nature makes it harder to predict when they will strike… [traceability]
Because they are alone they can’t take down larger animals… [soft targets]
The element of surprise is important to their success… [venues where people are distracted]
“Dispersers” will often form their own packs… [training]
They leave fewer tracks than a pack… [ability to blend in]
They rarely howl or sent mark… [anonymity]
Jon Nakapalau
They also subscribe to a radical and perverse version of Islam, making them radical Islamic terrorists. Yet our government is so ill-equipped to mount a defense against this enemy that our President refuses even to use that term. It took days of building pressure to drag it out of the Democratic frontrunner, Hillary Clinton, who stands a serious chance at being our next commander-in-chief. We will not even call our enemies what they are; how can we expect to defeat them?
We are facing evil terrorists who have twisted one of the world’s major religions into a doctrine of hate and death. They have no conscience; they are no different from animals. The sooner we realize that the face of our enemy may as well be the face of a cold-hearted, murderous wolf, the sooner we will be able to defend ourselves well.
Share
Facebook Twitter Pinterest Reddit Share via Email Print