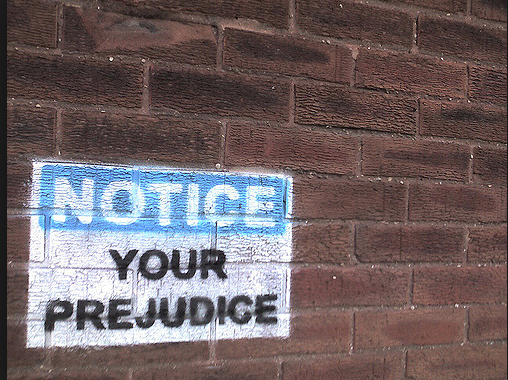 Today, the world is full of political correctness and allegations of “racism.” I grew up in a totally white environment – but for a few gypsies and some Vietnamese “exchange” students, there was no-one different in skin color. In such environment, we grew up inquisitive about differences – not prejudiced. Prejudice is something you must have inherited in your upbringing. No one is born prejudiced. We are all born human.

Hitler wanted to send all the Slavs to Patagonia, kill the Jews and the gypsies, and leave the world to those who obey and do their duty. The problem he encountered was that one could not precisely define who was who: in the absence of DNA analysis, the only way was to look at person’s physiognomy or family tree. We still look at the most obvious characteristics, if only subconsciously, because God created us different. There is nothing wrong with that – it is not prejudice or racism.

Looking at “the other,” we also introspect, which returns us to the issue of our own ethnicity and nationality. We have all heard of the Salad Bowl vs. the Melting Pot theory: multiculturalism vs. assimilation. How about if someone is “genetically” Indian (born in India, of Indian ancestors) and self-defines as a “British subject?” What about a Pilipino who feels American or an American who feels Mexican? England and the United States are nation-states, where statehood is identical with nationality, are they not?

In central and eastern European countries, especially those descended from the former Habsburg Empire, nationality and statehood had (indeed, have) always been different: nationality has been identical with ethnicity, whereas state encompassed many nationalities. Thus, you may view the ethnic genocides during the Yugoslav disintegration in the 1990s as a struggle to make statehood and nationhood identical. This is sometimes referred to as “ethnic nationalism.” It had originally been defined by Herodotus as kinship based on blood, custom and language. Not much has changed since. Today again, in the EU, countries feel as different nationals gathered together under the same statehood.

The law of the soil (Jus Soli), granting citizenship (i.e. nationality) to a person whose parents come from other nations than the one where their child is born, has been introduced in order to prevent statelessness. Today, there are 232 million migrants in the world, of which 65 million are considered refugees. A refugee is someone who was forced to leave their native country, as opposed to a migrant, who travels voluntarily. For a refugee status, one must prove persecution. For a migrant status, the host state provides welfare out of good heart and compassion, which follows the UNHCR guidelines intended to prevent statelessness.. The fact that Angelina Jolie is cited as the chief proponent of this effort  tells you how sophisticated this effort is – emotions rule the world!

Multiculturalism is a natural result of the effort to integrate and prevent statelessness. The effort to forcefully integrate ethnic groups always ends in struggle and ethnicity prevails. We can see it in the BREXIT movement today and if the forced immigration to the United States does not cease, we will soon see it in secessionism. We have been there before. It seems we have been forced back 150 years under Obama…