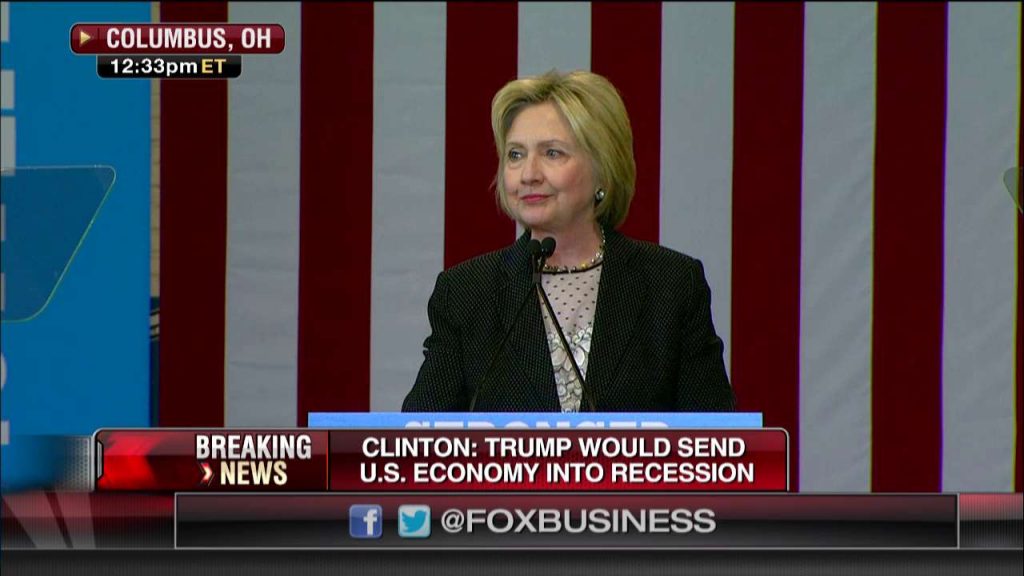 In a lengthy speech billed as an economic speech, presumptive Democratic nominee Hillary Clinton launched a part two blistering assault on her Republican rival Donald Trump, this time on his economic plans.

During her 45-minute remarks, Hillary sought to assail Trump’s economic ideas, warning voters point after point as dangerous for the U.S. economy. She also attempted to slam her rival record as a businessman, a central argument and one of Trump’s greatest campaign strength to suggest it will cause a “Trump recession.”

“Now I don’t say this because of typical political disagreements – liberals and conservatives say Trump’s ideas would be disastrous,” Hillary said. “The Chamber of Commerce and labor unions. Mitt Romney and Elizabeth Warren, economists on the right, the left and the center all agree Trump would throw us back into recession.”

Hillary cited a recently released report from Moody’s Analytics that assess Trump’s proposed economic policies could cause a prolonged recession as well as significant job losses by 3.5 million jobs during his first term in office.

“One of John McCain’s former economic advisers actually calculated what would happen to our country if Trump gets his way,” Hillary stated. “He described the results of a Trump recession: we would lose three and a half million jobs, incomes would stagnate, debt would explode, and stock prices would plummet. And you know who would be hit the hardest: the people who had the hardest time getting back on their feet after the 2008 crisis.”

Prior to the California primary, Hillary unleashed a full-frontal attack on Trump’s foreign policy idea, using his own statement and quotes against him to make the case that he is “temperamentally unfit” to be Commander-in-Chief. Using the same strategy to discredit Trump by blasting him for his past campaign rhetoric on the economics, Hillary is attempting to chip away poll numbers that show Trump is better fit to handle the economy as President. According to a CNN/ORC poll, 51% of nationwide registered voters think Trump is better suited to handle the economy over 43% for Hillary.

Using the “king of debt,” comment against him, Hillary went on to blast his campaign rhetoric on how he would manage the national debt, intermingling his policies with his corporate bankruptcies.

“He calls himself ‘the king of debt.’ And his tax plan sure lives up to that name,” Hillary said. “According to the independent Tax Policy Center, it would increase the national debt by more than $30 trillion over 20 years. That’s ‘trillion,’ with a ‘T.”

Hillary added, “He’s written a lot of books about his business. They all seem to end at Chapter 11,” Hillary quipped, drawing laughter from the crowd. “We cannot let him bankrupt America like we are one of his failed casinos.”

“Under Donald Trump’s plan, these Wall Street millionaires will pay a lower tax rate than many working people,” Hillary stated.  “And of course, Donald himself would get a huge tax cut from his own plan, but we don’t know exactly how much, because he won’t release his tax returns,”

The speech delivered in Ohio, a quintessential swing-state. In a new poll released by Quinnipiac on Tuesday shows both Trump and Hillary tied in Ohio in a two-way race, with 40% each. A month ago, Hillary was trailing Trump 44%-39% in a CBS/YouGov poll. 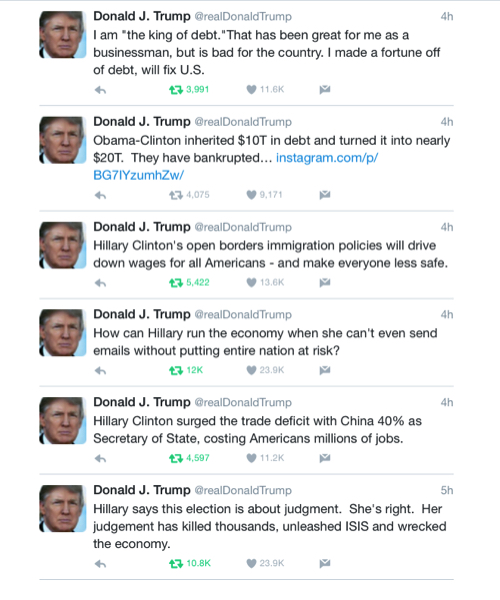 During her address, Trump took to Twitter, firing back with numerous comebacks on her record during her time as Secretary of State. Beside the Twitter comebacks, Trump’s campaign team began to send out numerous emails to reporters as Hillary spoke, a sign of active rapid-response operation of rebuttals. Emails included detailed information on Hillary’s record from the economy, trade, and immigration as Secretary of State.

Trump plans to deliver his own speech against Hillary on Wednesday in New York City, announcing earlier on Twitter that the big speech will “discuss the failed policies and bad judgment” of Hillary.

I will be making a big speech tomorrow to discuss the failed policies and bad judgment of Crooked Hillary Clinton.

At the same time, Hillary is scheduled now to deliver another speech on the economy, this time outlining her own vision that she calls a “growth and fairness economy.”

Rush Limbaugh: Obama’s Values not Traceable to our Founding