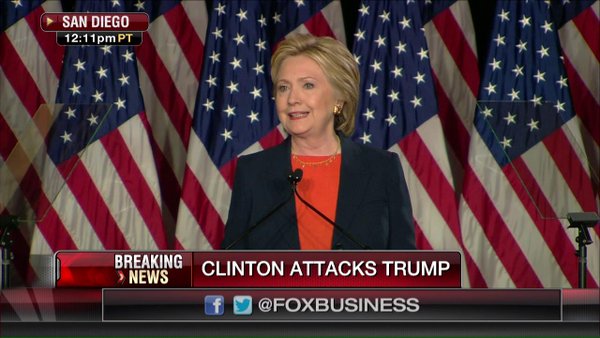 In a speech billed as a major foreign policy that became an full-blown obsession on Donald Trump, Democratic presidential front-runner Hillary Clinton unleashed a series of attacks on the GOP presumptive nominee approach to foreign policy.

“I believe the person the Republicans have nominated for president cannot do the job,” Clinton said to an audience in San Diego, California. “Donald Trump’s ideas aren’t just different. They are dangerously incoherent. They’re not even really ideas — just a series of bizarre rants, personal feuds and outright lies.”

During her 40-minute speech, Clinton attempted to convince voters of Trump’s inexperience and lack of knowledge of foreign policy. Pointing to her credentials in foreign policy, Clinton unleashed a full frontal assault, hoping to provoke Trump to lash out against her in order to dramatize his temperament to showcase it as being”unfit to hold office.”

“He is not just unprepared,” Clinton stated. “He is temperamentally unfit to hold an office that requires knowledge, stability and immense responsibility.”

She added, “This is not someone who should ever have the nuclear codes – because it’s not hard to imagine Donald Trump leading us into a war just because somebody got under his very thin skin.”

The speech was billed as a major foreign policy address, but Clinton gave no new policy points. Instead she delivered attacks that were once used to attack Trump by most of his GOP primary rivals. Familiar talking points centered on Trump’s comments on banning Muslims from entering the United States, NATO, nuclear proliferation, and defeating ISIS.

“This isn’t reality television, this is actual reality,” Clinton said. “The stakes in global statecraft are infinitely higher and more complex than in the world of luxury hotels.”

On the Iran Deal, Clinton mocked Trump’s understanding of the deal, comparing his criticism of making deals in obtaining a golf course. “Donald Trump doesn’t know the first thing about Iran or its nuclear program,” Clinton said. “There’s no risk of people losing their lives if you blow up a golf course deal, but it doesn’t work like that in world affairs.”

Clinton also warned the audience that a Trump presidency would lead the United States to a global economic crisis. “He believes we can treat the U.S. economy like one of his casinos and default on our debts to the rest of the world, which would cause an economic catastrophe far worse than anything we experienced in 2008,” Clinton said.

She evoked her own foreign policy experience during her time as Secretary of State under President Obama to compare herself to Trump who only has experience in business. “He says he has foreign policy experience because he ran the Miss Universe pageant in Russia,” Clinton said, promoting laughs from the small audience. “I remember being in the Situation Room with President Obama, debating the potential Bin Laden operation. Most of all the lives of those brave SEALs and helicopter pilots hung in the balance. It was a decision only the President could make. And when he did, it was as crisp and courageous a display of leadership as I’ve ever seen.”

Clinton added, “Imagine Donald sitting in the situation room, making life or death decisions on behalf of the United States. Imagine if he had more than his Twitter account at his disposal when he’s angry, but America’s entire arsenal. Do we want his finger anywhere near the button?”

The focus speech of Trump gave a clear warning of the aggressiveness she will take against her GOP opponent come time for a general election showdown this fall. However, Clinton is still consumed in a primary battle against Senator Bernie Sanders who is closing the lead in California with its primary just five days away. A win for Bernie in the Golden State can turn the tide by changing the convention rules to “require superdelegates to vote for the candidate who won their state’s primary or caucus.” Sanders can also highlight Clinton’s weakness as the democratic nominee for the general election as recent polls conducted shows Clinton in a statistical tie against Trump, while Sanders is the strongest candidate to defeat Trump by about 10 points. Another problem Clinton faces at the finish line is the recent State Department IG report showing the former Secretary of State breaking the rules in using a private email server during her tenure. All of these scenarios can help Sanders sway superdelegates opinion of Clinton as well as their backing.

Sanders released a statement shortly after Clinton’s speech to take a swipe against his Democratic opponent.

“I agree with Secretary Clinton that Donald Trump’s foreign policy ideas are incredibly reckless and irresponsible,” Sanders said in the email statement. “But when it comes to foreign policy, we cannot forget that Secretary Clinton voted for the war in Iraq, the worst foreign policy blunder in modern American history, and that she has been a proponent of regime change, as in Libya, without thinking through the consequences.”

Trump took to Twitter to give his take of Clinton’s attack speech during which he composed the same time as she spoke. Clinton predicted that Trump would take to Twitter to “compose nasty tweets” about her as she was speaking.

Crooked Hillary no longer has credibility – too much failure in office. People will not allow another four years of incompetence!

Bad performance by Crooked Hillary Clinton! Reading poorly from the telepromter! She doesn’t even look presidential!

Paul Ryan Says He Will Vote for Donald Trump

Daniel Greenfield: The Friend and the Foe