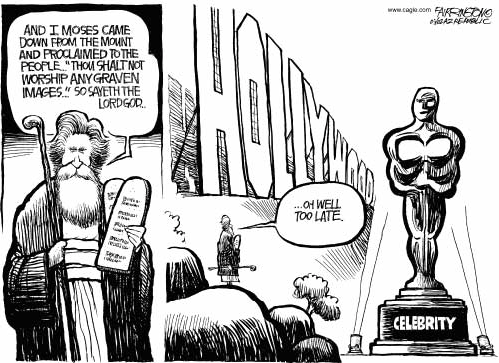 Sometimes when I see Kim Kardashian on the cover of a magazine, or on TV, or, you know, in her science lab splitting the atom, I think to myself “Wha??”

I’ve said it before (during a rather lengthy eulogy for a friend’s pet gopher) and I’ll say it again, “If all it takes for a gal to be a celebrity gazillionaire is a giant caboose and a shallow personality, I should have been a super star by the time I was 26.”

How is it that we’ve come to a place, as a society, where we’ll readily vote by the tens of thousands in an online poll about who wore a dress better, Jennifer Lopez or Jennifer “Someone else”, and yet trickle in around three hundred or a thousand votes for a city election? Can you imagine the voter turnout if Grumpy Cat ran for office?

It just seems to me that we’re completely backwards in the way we think about “fame” these days. I can remember as a little girl becoming so excited about getting an autograph from a Fireman, or beaming with pride the first time a real live soldier spoke to me. When did putting those types of people on a pedestal become unnecessary?

Now don’t get me wrong, I understand the way time works. I know that each generation has those “special” types that the parents never quite see the appeal in, the types that absolutely drive the so-called “older generation” crazy. Elvis Presley, The Beatles, The Rolling Stones, Bob Dylan. My poor family had to endure almost two solid years of me being head over heels in love with a Scottish band called The Bay City Rollers. Everything I had was plaid, every single conversation was about how magnificent the group was. I get it. We like who we like. But the thing is, for years we really did look up to people who deserved it ( and granted, the Bay City Rollers probably didn’t deserve so much adoration) but certainly we were correct in giving respect to those that protected us, rescued us, inspired us.

I guess the most important thing that we should all remember is to keep who we adore or admire in perspective. For instance, my adoration for a favorite teacher led me to a life of helping others, while the only thing Kim Kardashian has inspired me to do was eat less carbs. (Well actually, I guess I should really thank her for that one…)