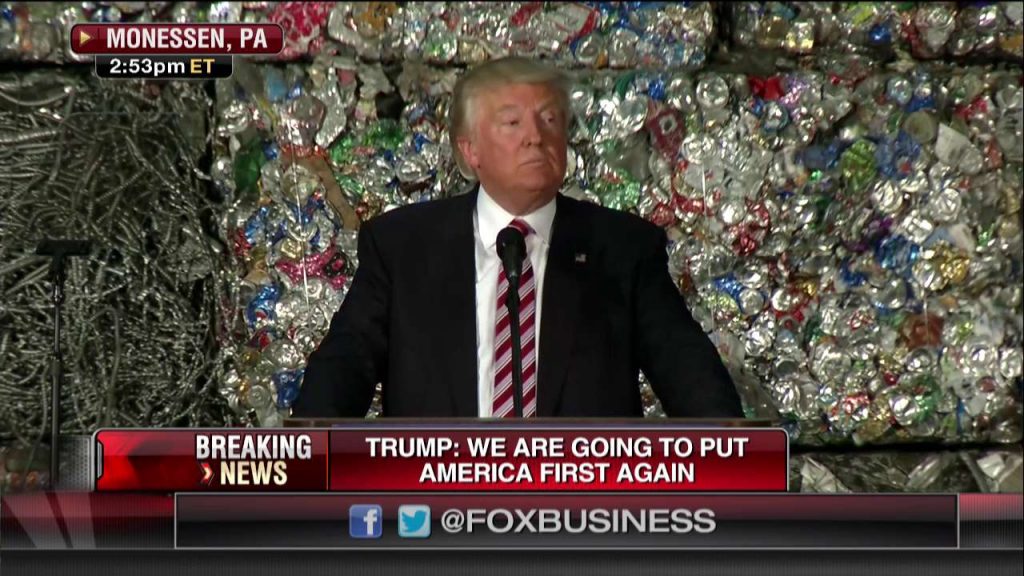 In a major speech on trade, GOP presumptive nominee Donald Trump announced a seven-point plan on bringing back jobs to America, while hammering his general election rival Hillary Clinton on promoting a globalist trade policy that has pushed manufacturing jobs overseas.

“Our politicians have aggressively pursued a policy of globalization that has moved our jobs, our wealth and our factories to Mexico and overseas,” Trump said, giving his prepared remarks called “How To Make America Wealthy Again” in Western Pennsylvania. “The people who rigged the system are supporting Hillary Clinton because they know as long as she is in charge nothing will ever change.”

Trump added, “Globalization has made the financial elite who donates to politicians very wealthy but has left millions of our workers with nothing but poverty and heartache.”

Coming back from his three-day trip to Scotland, Trump continued to celebrate the decision the U.K. voters decided in leaving the European Union, reminding U.S. voters how both Hillary and President Clinton were on the wrong side of that issue, suggesting a parallel of the Brexit vote will happen in the United States.

“Our friends in Britain recently voted to take back control of their economy, policies, and borders,” Trump said. “I was on the right side of that issue, with the people, while Hillary as always stood with the elites, and both she and President Obama predicted that one wrong.”

“Now it’s time for the American people to take back their future,” Trump added. “That’s the choice we face — either give in to Hillary Clinton’s campaign of fear, or we can choose to believe again in America.”

Standing in front of a backdrop of stacked bundle of crushed aluminum, Trump criticized NAFTA and the World Trade Organization by pointing to the work of both Hillary during her tenure as Secretary of State, and her husband, former President Bill Clinton for supporting and negotiating such deals. He went on to attack the Clinton’s for supporting both trade deals and Hillary on flip-flopping on supporting the TPP.

“At the center of this catastrophe are two trade deals pushed by Bill and Hillary Clinton — NAFTA and China’s entry into the World Trade Organization ” Trump said. “NAFTA was the worst trade deal in history, and China’s entrance into the WTO has enabled the greatest job theft in history.”

Trump went on to challenge Hillary “to withdraw from TPP her first day in office,” warning that she won’t and will betray American workers for Wall Street.

“If the media doesn’t believe me, I have a challenge for you — Ask Hillary if she is willing to withdraw from the TPP her first day in office and unconditionally rule out its passage in any form,” Trump stated. “[Hillary] was totally for TPP just a short while ago, but when she saw my stance against it, she was shamed into saying she would be against it too, but I have no doubt she will immediately approve it if it is put before her … betraying American workers for Wall Street.”

Seizing on an issue Hillary’s primary rival Bernie Sanders has railed against, Trump once again made a direct appeal to his supporters to join his campaign based off Hillary’s past remarks in favoring trade deals. A recent poll from Bloomberg Politics found that 22% of those who support Sanders plan to vote for Trump. During his remarks, Trump praised Sanders for speaking out against trade deals while noting that both agree on this issue.

“As Bernie Sanders said, ‘Hillary Clinton voted for virtually every trade agreement that has cost workers of this country millions of jobs,’” Trump said. “Hillary praised or pushed TPP on 45 separate occasions and even called it the ‘gold standard.’’

During his half-hour remark, Trump vowed to step up punishing the country, in particular China, for violating trade rules, blaming Hillary for remaining “idly while China cheated on its currency” during her time as Secretary of State. He also stated that China who is not a part of the 12-nation trade deal will enter “the TPP through the back door” at a later time.

“China’s entrance into the WTO has enabled the greatest job theft in history,” Trump stated. “It was Bill Clinton who lobbied for China’s disastrous entry into the WTO and Hillary, who stood by idly while China cheated on its currency, adding another trillion dollars to our trade deficits, and stole hundreds of billions in our intellectual property. Mark my words, China will enter the TPP through the back door at a later date.”

Outlining a seven-point plan his administration would take in helping to bring back American jobs lost to globalization, Trump vowed to change the failed trade policies with recommendations such as withdrawing from TPP, appoint smart trade negotiators for American workers, renegotiating on NAFTA for “a better deal for our workers,” direct Secretary of Commerce to identify foreign country violating trade agreements, label China as a “currency manipulator,” instruct U.S. Trade Representative to bring trade cases against China, and use presidential power to remedy trade disputes by applying Section 201 and 301 of Trade Act of 1974, and Section 232 of Trade Expansion Act of 1962.

Prior to Trump’s speech, the Clinton’s campaign held a press conference with reporters with U.S. Senator Sherrod Brown of Ohio and International President of the United Steelworkers Leo Gerard called Trump a “hypocrite” who manufactures numerous Trump’s products around the globe.

“With all of his personal experience profiting from making products overseas, Trump is the perfect expert to talk about outsourcing,” Brown said. “He’s been a hypocrite when it comes to talking about Made in America, then outsourcing so many of these jobs. We know, just in my state alone where Donald Trump could have gone to make those things, he could have fought to make these products here, but he didn’t.”

The Chamber of Commerce, a supporter of free-trade agreements, blasted Trump’s plan on trade in a series of tweets from its account during the time Trump gave his remarks.

Inheriting Prejudice In the Name of Nationality, Ethnicity, Statehood

The Benghazi Report, What Did We Expect?