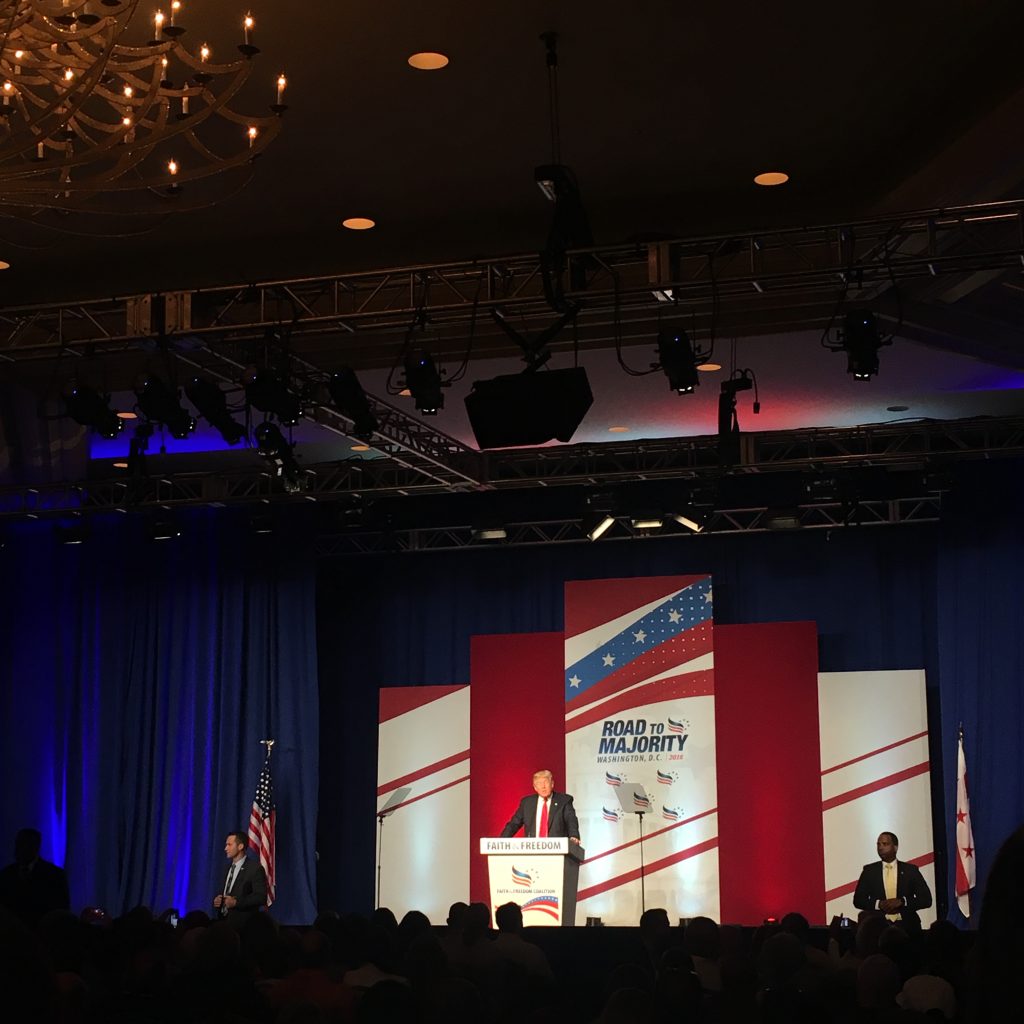 Washington, D.C. — Presumptive GOP presidential nominee Donald Trump spoke to a group of conservative activist Friday afternoon, giving a preview of his upcoming speech on Monday by going after Democratic rival, Hillary Clinton, as well as emphasizing the importance of social conservative values.

“For the first time ever, the President of the United States endorsed somebody under criminal investigation,” Trump told the crowd gathered at the Road To Majority conference hosted by the Faith & Freedom Coalition in Washington, D.C. “Hillary Clinton has jeopardized — totally jeopardized national security by putting her emails on a private server all to hide her corrupt dealings.”

Introduced by Ralph Reed, founder and chairman of the Faith and Freedom Coalition, spoke highly of the GOP presumptive nominee, calling him a “good friend” and a person that social conservatives should unite behind, no matter of his imperfections. “As Christians, we are called to put away our ‘my way or the highway’ pride,” Reed said. “We are not looking for a political messiah, because we already have a messiah and we don’t need to find one in the political arena.”

Receiving a warm welcome from the hundreds of attendees, Trump during his 20-minute short speech, reading mostly from a teleprompter where he pledged to protect religious liberty, the “sanity and dignity of life,” marriage, and defending the nation of Israel. “We will restore faith to its proper mantle in society,” Trump said. “We will respect and defend Christian Americans.”

Speaking from the heart, Trump spoke in a softer, gentler tone compared to his rambunctious speech given during the primary season. Recent remarks from Trump involving a judge who is presiding over the civil case involving Trump University will be biased against him and the case due to his Hispanic heritage has many Republicans calling out the GOP presumptive nominee to tone it down.

“Freedom of any kind means no one should be judged by their race or their color and the color of their skin should not be judged that way,” Trump said. “And right now, we have a very divided nation. We’re going to bring our nation together.”

Facing a week long of backlash by many from both sides of the aisle, Trump has begun to take the advice of many who ask for him to act “more presidential.” Considered to be a newer, more presidential candidate, Trump warned a Hillary presidency would ruin the country due to her policy proposals on education, taxes, and immigration. He also argued that her agenda is influenced special interest donors and she won’t work for the American people.

“Hillary Clinton’s Wall Street agenda will crush working families,” Trump said. “She will put bureaucrats, not parents, in charge of our lives, and our children’s education can’t have it. She will be trapping kids in failing schools. She will plunge our inner cities into even deeper poverty, if that’s possible.”

Trump emphasized the importance of defeating Hillary in November because of the major implication it has on the Supreme Court. He pointed out to the list of judges that he is considering for in the vacancy of the Supreme Court. The 11 judges in consideration all have strong conservative credential have won over some conservative who were concerned about a Trump presidency.

“We will appoint judges who will uphold our laws, protect our Constitution, and protect the rights of all Americans,” Trump continued. “That’s one of the most important reasons we have to win the presidency. If we don’t, it’s going to be a whole different country.”

Trump added, “And by the way, these judges are all pro-life.”

On the issue of refugees, Trump reiterated his calls to pause the admission of Syrian refugees, due the threats of radical Islam. He bashed Hillary for wanting a “500% increase in Syrian refugees” and her refusal to utter the words radical Islam. “Now Hillary Clinton, or as I call her crooked Hillary Clinton—as crooked as they come—refuses to even say the words radical Islam, refuses to say the words,” Trump said. “This alone makes her unfit to be president. In fact, she wants a 500% increase in Syrian refugees to come into our country. No good. No good. No good. Can’t do it. We don’t know where they come from, where they are.”

As Trump was going into details of Hillary’s plan to increase refugees, a few Code Pink protesters interrupted his speech, by yelling, “refugees are welcome here,” and “Dump Trump!” As the protestors were ushered out of the event, the crowd began to shun out the yelling by chanting “USA! USA!” and “Trump, Trump, Trump.”

“Very Rude! It’s amazing what goes on,” Trump said in a calming matter, describing the protesters as “professional agitators sent here by the other party.” “What has happened in our country is so sad, we are so divided.”

Outside the Omni hotel where the Conference was being held, Code Pink and a group of faith leaders and groups gathered to denounce Trump for being a “divisive candidate predicated on attacking people’s gender, background, race, and religion.”

On Monday, Trump is scheduled to deliver a detailed informative speech, focusing solely on the Clintons in New Hampshire.