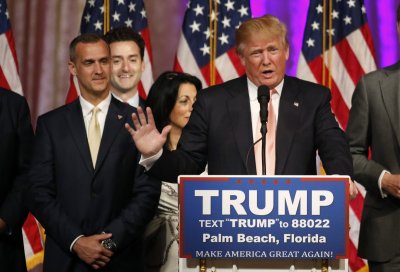 “The Donald J. Trump Campaign for President, which has set a historic record in the Republican Primary having received almost 14 million votes, has today announced that Corey Lewandowski will no longer be working with the campaign,” spokeswoman Hope Hicks said. “The campaign is grateful to Corey for his hard work and dedication and we wish him the best in the future.”

The New York Times first reported the news Monday morning, citing an unnamed source who briefed the news publication the move “was to steer the next phase of the campaign… to reassure donors and Republicans more broadly that [Trump] can adjust toward a November election strategy.”

Lewandowski is considered to be a controversial campaign manager who directed Trump’s presidential campaign from the beginning. But, besides the circus occurring during the primary season involving Trump and his GOP rivals, Lewandowski would also have his own controversy of his own, by repeatedly clashing with both reporters and inner campaign officials, including senior adviser Paul Manafort.

The clash between Manafort, a veteran campaign operative and Lewandowski would be seen as toxic between both that was centered on toning down Trump fiery persona as well as the direction of the campaign. Manafort sought to make Trump more discipline, encouraging the candidate to use a teleprompter, while Lewondowski didn’t want to alter Trump’s unconventional campaigning style, calling the strategy line of the mantra, “let Trump be Trump,” a phrase defining Trump off-the-cuff speaking style.

The campaign manager would become the center of attention in March when former Breitbart reporter Michelle Fields accused him of battery assault for grabbing her after a Trump news conference in Florida. The campaign manager was briefly charged with simple battery, but the state of Florida declined to prosecute the case forward.

The decision from Trump is a significant move just one month before the RNC convention in Cleveland. With amid sinking poll numbers as well as criticism from Republican officials continues to grow, sources from inside the campaign stated Trump made the decision himself as an overhaul that was necessary ahead of the general election. According to a Trump adviser, the decision to fire Lewandowski “was made swiftly in a Monday morning weekly meeting with Trump’s family members.”

Trump’s daughter, Ivanka Trump played a pivotal role in convincing her father to take action in firing Lewandowski. According to the source, Ivanka has been unhappy with Lewandowski for months that began after the campaign manager was accused of assaulting Field and would dominate news coverage for weeks. Trump would remain loyal to his campaign manager, sticking by his side and saying he wouldn’t dump Lewandowski. “I don’t discard people,” Trump said in March. “I stay with people.”

During a 30-minute interview with CNN’s Dana Bash just hours after the news broke, Lewandowsi said he doesn’t know why he was fired when asked why Trump let him go.

“I don’t know. I don’t know the answer to that,” Lewandowski responded. “But what I know is that what we’ve been able to achieve in this election cycle has been historic…Things change as the campaign evolves and a general election campaign against a very well funded giant organization like the Clinton campaign is very different than running against those smaller primary state elections.”

Lewandowski downplayed reports of internal problems that played a role in the firing, praising his former boss while promising he will do everything, either from the inside or outside the campaign to make sure Trump becomes president.

“I think Donald Trump is going to be the next president of the United States. If there’s anything I can do to help make that happen,” Lewandowski said. “I had a nice conversation with Mr. Trump and I said to him, ‘It’s been an honor and a privilege to be a part of this, and I mean that from the bottom of my heart.”

When asked if there was tension between himself and Trump’s children, Lewandowski denied of any tension, telling CNN that he “has a great relationship with the family.”

Lewandowski confirmed that he will still remain chairman of the New Hampshire delegation, a position his fellow delegates elected him to in May.