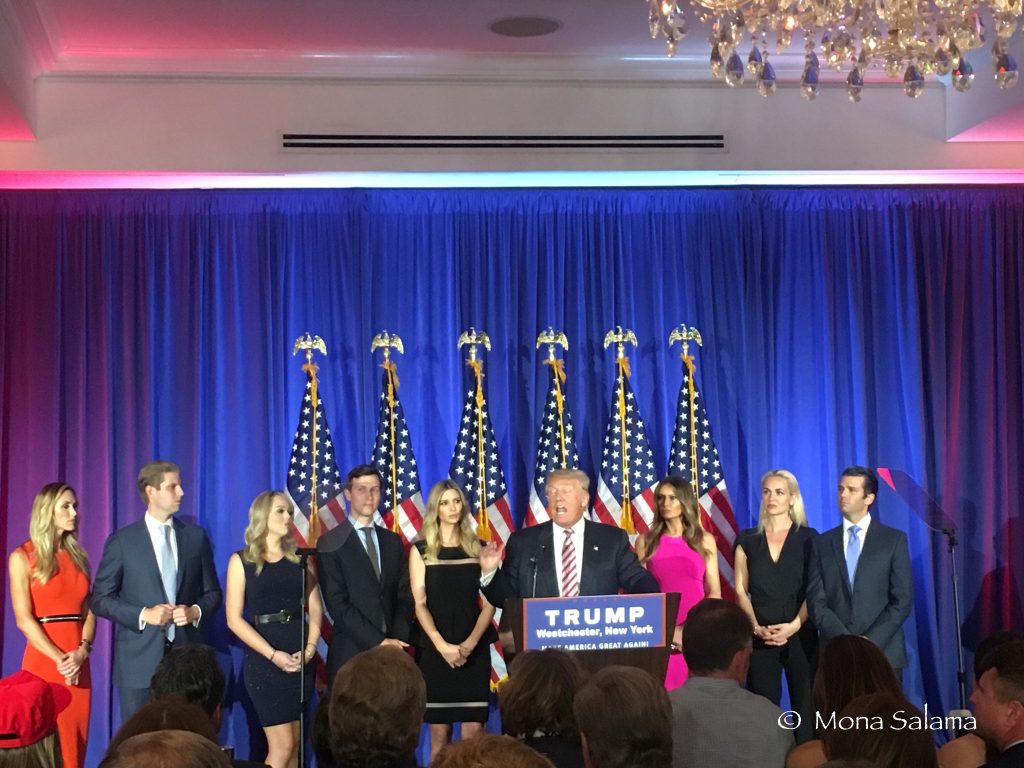 Briarcliff Manor, NY. — Presumptive GOP nominee Donald Trump ended one of the toughest, most whirlwind GOP primary election ever in history by giving a celebratory speech Tuesday night, using a teleprompter with the promise to make the party proud, while going after his general election opponent Hillary Clinton.

“We accomplished what no one thought was possible,” Trump said to supporters at Trump National Golf Club in Westchester, NY. “We close one chapter and begin another. You’ve given me the honor to lead the Republican Party to victory this fall. I will make you proud of our party and our movement.”

Surrounded by his family during his 20-minute remarks that took no Q&A, Trump focused his speech on his attacks on Hillary, announcing that he will deliver a major speech next week Monday devoted solely on the Clintons.

“I am going to give a major speech on probably Monday of next week and we’re going to be discussing all of the things that have taken place with the Clintons,” Trump said. I think you’re going to find it very informative and very, very interesting.”

Trump added, “The Clintons have turned the politics of personal enrichment into an art form for themselves. Hillary Clinton turned the State Department into her private hedge fund. The Russians, the Saudis, the Chinese, all gave money to bill and Hillary and got favorable treatment in return. It’s a sad day in America when foreign governments with deep pockets have more influence in our own country than our great citizens.”

He also made a direct appeal during his speech to invite Bernie Sanders supporters to support his campaign instead of Hillary’s campaign after it was announced that Hillary swept the New Jersey primary, giving her enough delegates to now be considered the Democratic presidential nominee. Many of Bernie’s supporters are skeptical of Hillary as an exit poll conducted last month shows that 4 out of 10 Democrats who voted for Bernie will likely vote for Trump than Hillary in November.

“To all of those Bernie Sanders voters who have been left out in the cold by a rigged system of superdelegates, we welcome you with open arms,” Trump said. “The terrible trade deals that Bernie was so vehemently against will be taken care of far better than anybody ever thought possible. And that’s what I do.”

Promising to carry the Republican Party to victory in the fall, Trump made no mentions of the controversial attacks on U.S. District Judge Gonzalo Curiel as many Republicans have condemned him for his remarks. For the past week, Trump alleged that Judge Curiel Mexican heritage makes him unable to preside over the civil case involving Trump University due to his campaign remarks he has made about promising to build a wall in Mexico if elected.

Before his remarks, Trump released a lengthy statement vowing to stop talking about the civil case. “I do not intend to comment on this matter any further,” the statement wrote. “With all of the thousands of people who have given the courses such high marks and accolades, we will win this case!”

Trump pledged to put “America first” in regards to foreign policy and trade, promising to fight for the American people. “We’re going to do it by putting America first. That commitment is the foundation for change that’s been missing and has been missing for a long time,” Trump said. “On foreign policy, we will never enter into any conflict unless it makes us safer as a nation… On trade, America first means the American worker will have his or her job protected from unfair foreign competition.”

He also vowed to “rebuild our inner cities” by putting Americans back to work with “real change not Obama change.”

After winning the last five GOP contests in New Jersey, Montana, New Mexico, South Dakota, and California, Trump will head to the Republican National Convention in Cleveland, Ohio with more than enough bound delegates without depending on unbound delegates needed to secure the nomination.

According to the AP count, Trump secured 297 delegates out of 303 delegates up for grabs in the final Super Tuesday contest. His total count has him with a total of 1,536 delegates, 299 more of the 1,237 delegates needed for the nomination.

Chris Christie: "Donald Trump is not a Racist"