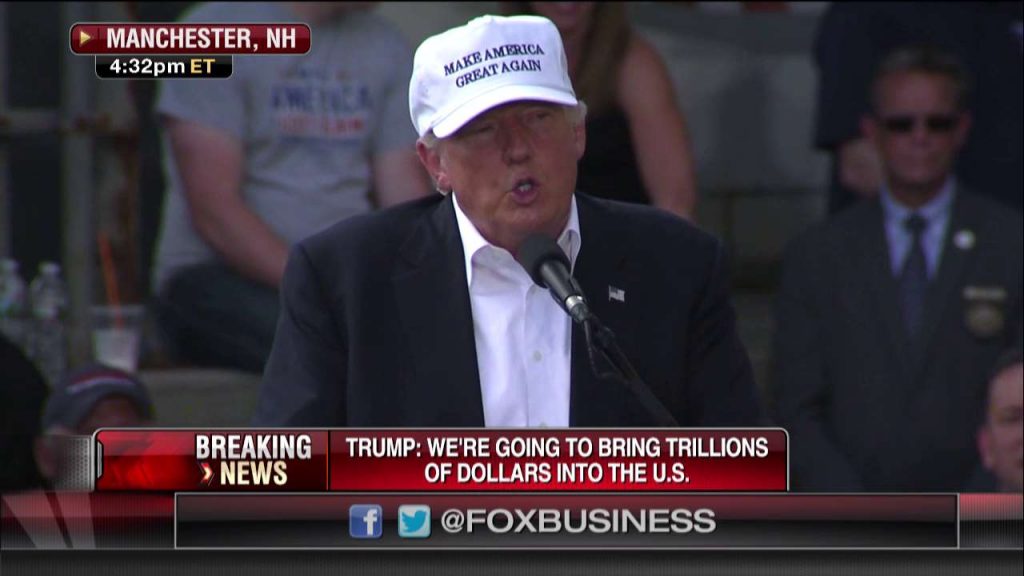 GOP presumptive nominee Donald Trump returned back to the state that gave him a comeback with his first GOP primary win — New Hampshire, for the second time in three weeks to give a speech focused heavily on U.S. trade deals.

“There is nothing that is closer to my heart than trade,” Trump said in a small town hall-style meeting in Manchester, N.H. “Yes, I am a free trader, but here is my stance on trading — I want to make great deals for the United States.”

Holding his small town-hall style meeting outside a former Osram Sylvania manufacturing plant that closed in 2014, Trump in the beginning of his remarks introduced a former worker by the name of Mike, who trained many workers that would later take his job once the manufacturing plant closed down. “I want to introduce to you a man that worked here for many years,” Trump said. “Mike actually had the distinct lack of honor of training people from Mexico to take his job. He took a large group of people, he trained them and they are right now down in Mexico. The company moved to Mexico.”

The closing of the former lighting manufacturing plant in Manchester resulted in the loss of 139 New Hampshire workers when it relocated its operation to Mexico and China.

On Tuesday, Trump laid out an aggressive trade policy agenda that consisted of shredding current trade agreements and renegotiate the terms for a better deal. His speech would later become overshadowed due to the recent terrorist attacks that occurred in Istanbul airport. The last minute event would later become a continuation of his Tuesday speech, adding statistics of job loss and the decline in manufacturing in key battleground states to point out the effects of the trade deals and the steps he would take to renegotiate NAFTA.
“We will renegotiate NAFTA, and if we don’t get a better deal, we will withdraw under Article 2205,”

Blaming his presumptive general-election opponent Hillary Clinton and her husband, former President Bill Clinton for supporting and signing the NAFTA deal, Trump listed off statistics such as New Hampshire that lost 31% of its manufacturing jobs, 36% in Pennsylvania, and 34% in Ohio to make his case.

Trump added, “This legacy is largely due, and you could actually say entirely due to NAFTA. The real Clinton Global Initiative is their economic plan to ship America’s jobs overseas.”

On TPP, Trump continued to pressure Hillary to disavow her commitment to this trade deal if she were to become president, stating this deal “will make NAFTA look like a baby.” Hillary supported the TPP deal during her tenure as Secretary of State, as well as helping to negotiate parts of the deal, but came out against the deal during the primary season when her Democratic rival Bernie Sanders pressed her for supporting the trade deals.

“Hillary Clinton understood and backed, and Bill Clinton certainly as the president, initiatives — they are a disaster, and now they want to go into TPP, Trans-Pacific Partnership,” Trump said.

“We should seek a guarantee from Hillary Clinton that she won’t sign it.”

During a small Q&A session, Trump was asked questions from the small invite only gathering on other topics besides trade. One question came from a man who advocated for the U.S. to stop “wasting our military in the Middle East in behalf of ‘Zionist Israel.’”

Trump added, “that was a tough question on Israel — that was nasty!

One man asked Trump to finally put into rest from critics who believe he will not uphold the constitution if he become president. “100 percent,” Trump answered. “

Another questions came a woman who argued that veterans should have TSA jobs instead of Muslim women who wear hijabs. “Why aren’t we putting our military retirees on that border or in the TSA?” The woman asked Trump. “Why not get rid of all the heejabies they wear at TSA?”