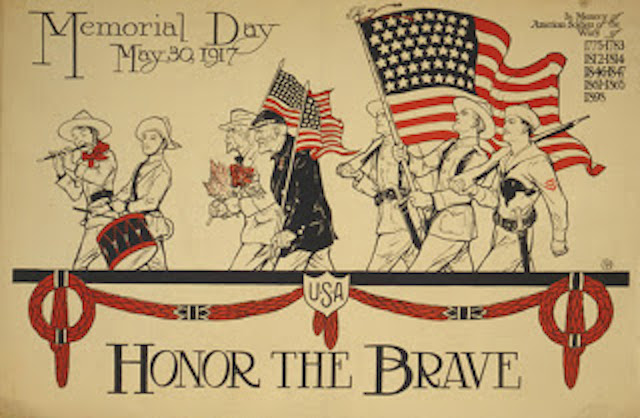 On Memorial Day, the flowers bloom. A dozen towns in a dozen states all claim that it began there when after the long weary struggle of the Civil War, the mothers and sisters of the lost and the fallen brought fresh cut flowers to bring a touch of life to the dead men entombed in the cold, gray stone.

“From the silence of sorrowful hours, The desolate mourners go, Lovingly laden with flowers, Alike for the friend and the foe,” reads the famous Francis Miles Finch poem which helped popularize the practice.

Today the wars are no longer fraternal. The First World War is the last war that had anything brotherly in it. It was a war where soldiers from both sides could observe a Christmas truce and hurl nothing deadlier than snowballs at each other. The end of that terrible war on the “eleventh hour of the eleventh day of the eleventh month” became Armistice Day and then, when the “war to end all wars” did not end them, but instead gave way to wars fought against terrible evils, Nazism, Communism, Islam, it became Veteran’s Day to remember those who would go on sacrificing in this eternal struggle against evil.

But while wars are no longer fraternal, the flowers are laid now on the graves of foes, not friends.

The men and women who die fighting for the cause of freedom are not accorded a fraction of the tender affection from the press that it lavishes on a single imprisoned Al Qaeda terrorist. We live today in an America in which the butchers of the Jihad in Guantanamo Bay receive better medical care than veterans waiting endlessly at the VA. While Obama cut off hot meals for Marines in Afghanistan, Islamic terrorists in Guantanamo Bay were enjoying lemon baked fish, honey glazed chicken, lyonaise rice, tandouri chicken breast, okra, hummus, dates, honey and seasoned lentils.

While veterans died at the VA, the men they had fought and helped capture were gifted with a $750,000 soccer field. This treatment is an obscene echo of the days of segregation when German POWs were allowed to sit inside at eateries while the African-American soldiers who guarded them had to wait outside. This segregation no longer occurs by race, but by patriotism and creed.

Obama denies that Islamic terrorism exists and suppresses any training materials about the role of Islam in Islamic terrorism while his administration warns of domestic terror threats from veterans. Muslim migrants from Syria receive lavish social benefits while health care for veterans is slashed. The Muslim migrants, many of whom support Islamic terrorists, benefit from job programs while veterans head for the unemployment line. This hatefully discriminatory attitude has become pervasive on the left.

Hollywood bends over backward to avoid accurately portraying Muslim terrorists, but depicts returning veterans as unstable killers and ticking time bombs. The media gushes over each petty Islamophobia grievance, like Tahera Ahmad, who claimed that she didn’t receive a Diet Coke can on a plane only because she was Muslim, while sweeping the sweeping the thousand veterans who died because of the VA scandal under the progressive prayer rug. A Muslim Diet Coke matters more than a thousand dead veterans.

When Secretary of Defense Ash Carter was slow to release Islamic Jihadists from Guantanamo Bay, Obama summoned him and personally chewed him out over the delays for his beloved terrorists. His predecessor, Secretary of Defense Hagel, said, “I’d get the hell beat out of me all the time on this at the White House.”

Does anyone imagine that Obama summoned the VA secretary to yell at him over the treatment of veterans? Instead he initially backed former VA Secretary Shinseki. And it’s doubtful that current VA Secretary Bob McDonald will be getting personally yelled at by Obama for comparing wait lines at the VA to Disneyland.

33% of veterans who have served since September 11 suffer from a disability. Their unemployment rates are higher and both poverty rates and food stamp use continue to rise. Behind these tragic facts is the tragic truth that we have forgotten how to honor our veterans. Worse still, the country’s leaders go out of their way to actively diminish the respect due to their courage and sacrifices.

On his visit to Vietnam, Obama referenced veterans only to praise John Kerry while insisting that “the courage to make peace” is more important than the courage “to fight”. The old-fashioned kind of veteran who fought in Vietnam, who earned his Purple Heart honestly and came home wounded in body and spirit, who is not interested in pretending that the Communist death squads he fought deserve his tribute is, according to Obama, lacking in courage. True courage is appeasement while the courage that stopped Nazi Germany and Imperial Japan is truly something closer to cowardice.

In his apology speech at Hiroshima, Obama cynically equated American and Japanese soldiers, as he had both sides in Vietnam, dismissing World War II as being fought out of a “base instinct for domination or conquest”. This is how the left sees war and soldiers. There are no good wars. Therefore the only good veterans are the ones who transcend it by recognizing that they made a mistake by fighting. That war is a misunderstanding to be resolved by the truly courageous diplomacy of men like John Kerry.

Is it any wonder that an administration which views the military as an evil to be abolished, which sees the war against Imperial Japan and Nazi Germany not as proof of our moral convictions, but as an outgrowth of our ancestors “having learned to make blades from flint and spears from wood, used these tools not just for hunting, but against their own kind”, has such contempt and hostility for veterans?

And is it any wonder that this contempt trickles through the institutions of the left, from entertainment to academia, and that in the shadow of these institutions, the honor due to the men who fought for our freedom, those still living and the dead, from the birth of our nation to its present crisis, is lacking?

Is it any wonder that veterans go hungry while lavish feasts are thrown in the institutions of government? Once we remembered that our freedoms come from the willingness to fight for them. Not with campus activism or empty words, but on the battlefield against those totalitarian enemies, whether they wear the death’s head, the red star or the crescent, which come to deprive us of them.

But our enemies today are as likely to come from within as without. We are in the midst of a quiet civil war and our veterans have become its first casualties. The heroes of today’s ruling class are racist rabble-rousers who tear down the flag for which so many of our soldiers died and replace it with their own militant banners of identity politics. The privileged leftist activists who once chanted “Ho, Ho, Ho Chi Minh, the NLF is gonna win”, who even attempted to murder soldiers to aid the enemy, are in charge of the country, while Vietnam veterans sleep on the streets and groan in prisons.

Obama’s disrespect for veterans and the military is only a symptom of a deeper rot. Once again a civil war is underway between those of us who love this Union and those who seek to divide it. It is a conflict fought with words and laws, rather than bullets, but it has its casualties who are all around us. It is not only the veterans who have died at the VA who are its victims, but those who have long slept under green grass and gray stone, whose graves wait to be decorated, whose courage waits to be remembered and whose cause waits to be fought once again.