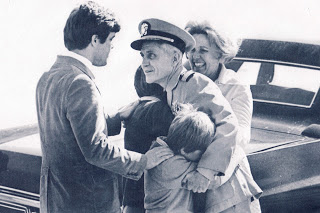 On his visit to meet with Communist leaders in Vietnam, Obama criticized the United States for having, “too much money in our politics, and rising economic inequality, racial bias in our criminal justice system.” He praised Ho Chi Minh’s evocation of the “American Declaration of Independence” and claimed that we had “shared ideals” with the murderous Communist dictator.

Shortly after the “evocation” that Obama praised, his beloved Ho was hard at work purging the opposition, political and religious. When Obama references these “shared ideals”, does he perhaps mean Ho’s declaration, “All who do not follow the line laid down by me will be broken.”

Perhaps he means the euphemistically named “land reform” which may have killed up to a million people. Like Stalin and Mao, Ho Chi Minh seized land and executed property owners as “enemies of the state”. The original plan had been to murder one in a thousand. But the relatively modest plan for mass murder was swiftly exceeded by the enthusiastic Communist death squads.

Obama has consistently called for wealth redistribution. This is what it really looks like. It’s men being hung from trees or lying in dirt dying of malaria. It’s death squads coming in the night. It’s a declaration that you are to be executed because you are the wrong class in a class war. It’s a man condemned to hard labor in a New Economic Zone and a family starving to death because the regime has commanded that they must be made an example of to other peasants.

As Obama said, on his visit to the brutal Communist dictatorship in Cuba, “So often in the past there’s been a sharp division between left and right, between capitalist and communist or socialist… And especially in the Americas, that’s been a big debate, right? Oh, you know, you’re a capitalist Yankee dog, and oh, you know, you’re some crazy communist that’s going to take away everybody’s property… you should be practical and just choose from what works. You don’t have to worry about whether it neatly fits into socialist theory or capitalist theory — you should just decide what works.”

Does Vietnam’s Communist dictatorship work? Obama seems to think that it does, talking up the, “skyscrapers and high-rises of Hanoi and Ho Chi Minh City, and new shopping malls and urban centers. We see it in the satellites Vietnam puts into space”. What’s a million dead when you’ve got satellites in space? What does it matter if you don’t have freedom of speech when there are skyscrapers in Ho Chi Minh City?

Unlike Pol Pot, whose genocidal crimes leftist activists like Noam Chomsky tried and failed to cover up, the Communist butchery in Vietnam that took place even long before the Vietnam War has largely been erased from common history. The victims of Ho Chi Minh and his successors have become non-persons not just in Vietnam, but in Washington D.C. Instead Obama associates one of history’s bloodiest Communist butchers with Thomas Jefferson.

What of the Declaration of Independence was there in Ho’s concentration camps? The brutal Communist regime whose ideals Obama praises, sent political dissidents to camps. Are those the ideals he shares with Uncle Ho?

The Soviet constitution had the same empty guarantees. The Nhan Van-Giai Pham intellectuals who were purged can testify that these words were as meaningless as those of the Vietnamese Declaration of Independence which Obama had quoted earlier. More relevantly the fourth article of the Vietnamese Constitution states that the “The Communist Party of Vietnam… the faithful representative of the interests of the working class, laborers and the whole nation, acting upon the Marxist-Leninist doctrine and Ho Chi Minh’s thought, is the leading force of the State and society.” That means there’s no freedom of speech, press, assembly or anything else except within the confines of Marxist-Leninist doctrine and Uncle Ho’s cunning distortions that fooled almost as many American leftists as Uncle Joe’s plans for Eastern Europe fooled Western European leftists.

Obama equates a Communist dictatorship to America in an ugly display of moral equivalence. “This is an issue about all of us, each country, trying to consistently apply these principles.” Vietnam locked up political bloggers for “abusing their freedom” just this March. According to Obama, America has “too much money in politics”. Vietnam doesn’t have that problem. It only has one party. The Communist Party.

Vietnam only has one party because its Communist leaders banned, purged and criminalized the opposition. But Obama doesn’t think that Communism is a particularly bad thing.

In his speech, he dismissed the Vietnam War as being caused by “fears of Communism” that overcame our “shared ideals”. Why were we afraid of Communism? It might have had to do something with the mass murder of 94 million people by Communist regimes. It might have a few things to do with concentration camps, bans of political parties and the imprisonment and execution of those practicing freedom of speech, assembly and the press.

Our “fears of Communism” were as real and valid as our “fears of Nazism”. It is only the fellow travelers of the left who deny this undeniable fact.

After one bout of mass murder, Ho Chi Minh dismissed his crimes with the words, “One cannot waken the dead.” Obama clearly agrees. The dead, American and Vietnamese, must be written off as part of an unfortunate conflict. We must forget why they died and embrace their killers.

Obama marked the lives lost on “both sides” as if the Communist terror squads butchering Vietnamese farmers or massacring Catholics were somehow morally the equal of American soldiers dying to stop them. Lives were also lost on both sides when America fought the Nazis. Reagan was rightly criticized for that sort of moral equivalence when he equated Nazi soldiers at Bitburg and concentration camp victims. And yet the liberals who protested that equivalence have nothing but applause when Obama equates murdered American soldiers and butchered Vietnamese families with their Communist killers.

When Viet Cong terrorists threw grenades into markets, are we supposed to mourn the children who were torn apart by shrapnel and the grenade throwers as morally equivalent? If we equate “the names of 58,315 Americans who gave their lives in the conflict” with the evil they were fighting, then we render their sacrifice worthless.

Their deaths become a meaningless mistake in an unnecessary war caused by our failure to understand our “shared ideals” with Ho Chi Minh and our irrational fear of Communist concentration camps.

That is Obama’s real message. We should have adapted some aspects of Communism and learned from our shared values. We should have closed our eyes to Ho Chi Minh’s atrocities as a matter of having to break human eggs to make Socialist omelets while celebrating him as another Thomas Jefferson.

That is the way the left saw it. That is still the way it sees it.

Obama’s trip to Vietnam is not a mere strategic journey, but yet another opportunity for him to remind us that the left has not repented or recanted of its solidarity and support for Communist terror whether in Cuba, in Vietnam or anywhere else. It still sees every Communist dictator as a role model worth emulating and every Communist mass grave as the price that must be paid for a better world.

Raymond Ibrahim: The Pope Who Gained the World But Lost His Own Soul