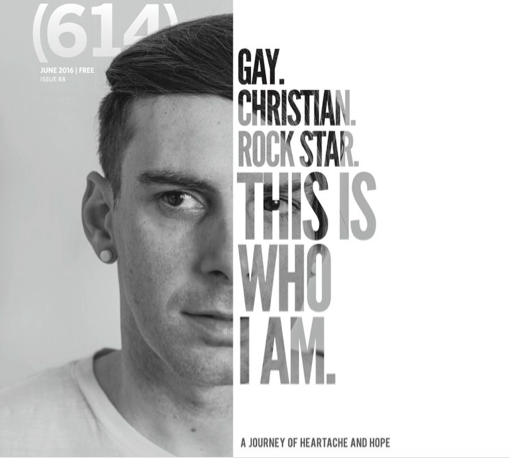 Recently I was saddened by a headline I saw on Facebook, the bearer of all bad news most of the time.  The lead singer and founder of Everyday Sunday, a Christian rock band, is coming out as gay.

Trey Pearson is featured on the cover of 614 Columbus, an Ohio magazine, for this big announcement. The headline reads, “Gay. Christian. Rock Star. This is who I am.” The headline bothers me because he is choosing to identify as gay before anything else. Most celebrities who are gay tend to do this.

In the article, Pearson talks about fighting off the feeling that he was gay for many years. He says it was a struggle, and I don’t doubt that one bit.

But that’s not the point.

What if we all started putting our sexuality before anything else? “Hi, I’m Macey, a heterosexual, Christian, homeschooling mother.”

That sounds stupid, doesn’t it?

I don’t want to get into the theological debate here but I do want to point out that the LGBT agenda wants gays to be seen as normal people just like everyone. If that is truly what they want, then why do they need to talk about it? I don’t hear hetero people talking about it so much. If ever. I never see “Straight” parades. They are the ones setting themselves apart.

I have seen the plethora of comments coming from both camps on this. There have been loving, polite, correctional comments using Bible verses and expressing their view on his situation. Their hearts ache for this man and, most of all, his family. Yeah, his wife and 2 small children who are having their entire world turned upside down so he can be his “true authentic self.”

Right below these comments come the comments from the supporters of Pearson’s coming out. They say that if you’re quoting the Bible and claiming to be Christian than you shouldn’t judge and give kudos to Pearson for being himself. Hi SELF. Self above God. They throw out verses about not throwing stones. Obviously if you lovingly point out someone’s sin you are a hater.

Is it loving for someone who is Christian to watch their sisters or brothers in Christ walk down a path that doesn’t lead them to the Lord? Would you, as a parent, not say anything to your child if he walked into traffic because it’s not loving?

Are these Christians saying hateful things? No, not these ones. Some are, yes. And I question whether they are truly Christian or not…and so do others, who then judge those commenters, even while they yell at them not to judge.

This man who has many fans is now in a position to lead so many Christians astray. To teach them that God loves them no matter what. Which, yes, God does love you no matter what. Do not mistake His love as a “get out of jail free” card though. We all will be judged.

I’m not better than Trey Pearson, or any other Christian or Pastor who claims to be righteous yet leads his flock astray. I’m not less of a sinner. Thankfully, not being the leader of a flock means I won’t be held at a higher standard when judgement comes. That’s not to say I don’t fear the Lord and His judgement. All Christians should have a healthy dose of reverence.

The difference between the average Christian who sins and someone like Trey Pearson or any other expressing the wish to be their “true, authentic self” though? I don’t shout about my sins, am not unrepentant of them and I sure don’t want, ask, or support the active celebration of those sins.