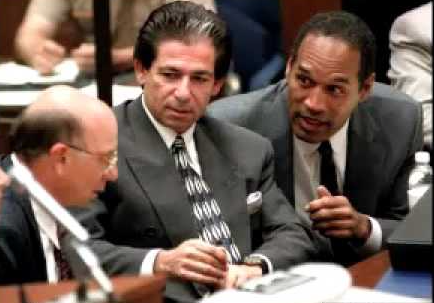 The Cleveland Cavaliers have just won the NBA Finals over the Golden State Warriors in a close game 7 that was one of the highest rated sports telecasts in NBA history.  Since the finals started a couple of weeks ago, ESPN started their 30 for 30 5-part documentary series on O.J. Simpson called, O.J.: Made in America. It is only fitting that the series would be airing during the NBA Finals because the beginning of the media circus surrounding the O.J. Simpson trial started on June 17, 1994. During game 5 of the Finals, NBC decided to show the infamous car chase in a split screen while the game was still in play, much to my confusion.

Back then, like most people I didn’t know much about O. J. other than the fact that he was a great football player.  Sometimes a commentator would mention how a young rookie running back resembled Simpson, or when a player was reaching some record he held at that time. So imagine me watching this white Bronco on the other side of the TV screen and wondering, ‘Why is this so important that it couldn’t wait to be reported on the nightly news after the game?’ Little did I know that this slow and annoying car chase would be the smoldering catalyst as to how I view the world today.

This article is not meant to rehash the details of the O.J. Simpson case (which have been scruntized a million times before); this is just how the turn of events during this time influenced me as a conservative, although I didn’t realize it at the time.

The People of the State of California vs. Orenthal James Simpson wasn’t must-see TV for me as a 15 year old, but it would come up from time to time amongst my peers, and it was the basis of conversation with my parents. My overall knowledge of the O.J. trial was pretty basic, considering that the information I was receiving came from word-of-mouth and watching recaps on the nightly news. As the trial continued and the more I learned, a sense of confusion was growing in my mind. I was confused because when I heard the various theories about what happened, one thing stood out: regardless of what people believed about the facts coming out of the trial, at the end of the day almost everyone I knew wanted Simpson to be acquitted.

This was the first time I noticed for myself that people were willing to forsake logic over race.

Back then I didn’t articulate it that way, but what I was seeing firsthand was that it seemed like black people wanted O.J. free simply because he’s black! It was confusing to me, because just looking at the information about the case I was at least skeptical about it, leaning towards thinking he was guilty. But even the people who were skeptical like I was wouldn’t admit he might be guilty, and if they did they thought it was because of “The Man” and not because they were convinced by the facts of the case.  Still, at age 15 the O. J. Simpson trial wasn’t a priority that consumed me enough to get into arguments because I didn’t agree with the majority of black people in America. So the ESPN docu-series, as well as the FX mini-series, The People v. O. J. Simpson, reminded me of events I had long forgotten–but one thing I will never forget was the day the verdict was announced.

October 3, 1995 was like any other day.  I didn’t watch the news that morning about the upcoming verdict but once I got to school I got caught up real quick.  Every room had a television so the school decided they would air the verdict in our classrooms so we could witness what thought would be a historic moment. Personally, I felt the same as I did when I watched the NBA Finals, wondering why we couldn’t wait to find out about it when we got home–but looking back at what happened after the reading of the verdict that may have been problematic.

As the words “Not Guilty” were spoken, an eruption of cheers could be heard throughout the entire school.  It was like watching Cleveland Cavaliers fans at the end of this year’s Finals!  That spontaneous celebration was a shock to me.  My school was 95% black and most of the teachers and staff were white, so I saw the full spectrum of emotions from each race. On one side I saw joyous black students and the few black administrators.  On the other I saw the white teachers openly upset and some literally crying about what just happened.

Soon after the news got around town, our intercom system was buzzing nonstop from parents who had permission pick up their children early, I guess to celebrate the verdict. I was still confused about why this was such a big deal, but of course I also saw it as an opportunity to go home early and tried to get someone to check me out of school (to no avail).  So there I was, stuck at school with half the students gone.  Teachers were either happy or sad.  And from the moment the verdict was read, an impromptu parade of cars were driving by the school blasting loud music, screaming, and honking horns throughout the entire school day.

To summarize what I witnessed the days after the verdict both in the media and among my peers was,  “black people glad/white people sad.”  The events that transpired left a lingering effect in the back of my mind.  I was disappointed to see black people celebrating someone simply because OJ was black, regardless of whether he was at fault or not.

The seed of concern that was planted in 1995 continued to grow as the years passed. I saw the aspects of black culture defended at all costs, regardless if it was detrimental to our own race. I watched aspects like the glorification of vulgarity and violence in hip hop music, and acts of violence going unreported in black communities out of fear of being a “snitch” or some sense of solidarity. Meanwhile the black “leaders” were directing blame towards everyone else, using excuses to explain away the reasons why things are what they are in black communities.  Basically they were making it seem like black people were infants with no self control, needing “pacifiers” in the form of money/entitlements to calm us down.

At the time I wasn’t outwardly expressing any of this because I was partaking in some of the problems too, specifically listening to rap music. I was in the marching band in school and, liking music in general, I mostly listened to hip hop music because I liked the beats.  However, the hypocrisy in defending this type of music was not lost in my mind.  These days, when I hear a song I listened to back then, I can hear things that I only now understand what they were talking about and it appalls me.

More years passed and more illogical events were occurring, but the 2006 Duke lacrosse team scandal was the final straw for me. Seeing Al Sharpton, Jesse Jackson, and other black “leaders” come to North Carolina and destroy the lives of those lacrosse players–based on evidence that was at best skeptical–lit the fuse that began in 1995 with the OJ verdict.  After that, I lost all respect for Al Sharpton, Jesse Jackson, and/or anyone else associated with that sham of a campaign.

The process that led me from being an apathetic, universalist, zombie Democrat voter to an engaged Christian conservative came about when I finally understood what it meant to be Christian in late 2007.

The 2008 presidential election was fast approaching and I wanted to be as informed as possible about my vote.  I basically started with a blank state, not knowing much of anything about the people running, the principles of the parties, or even what the terms “liberal” or “conservative” really meant.  So I started listening and watching across the spectrum from Air America to FOX News.

As my knowledge grew, I realized that the murder of children in the womb (aka abortion) was becoming a key issue to me.  Of all other issues, nothing matters if a person can’t even make it out of the womb! Illegal immigration and taxes were the other issues that were becoming important as well.

With those three issues to use as a barometer–abortion, illegal immigration, and taxes–I now had the ability to intellectually vet the presidential candidates.  And for each candidate, there was one more question I wanted answered: Are you now or have you ever been associated with Jesse Jackson, Al Sharpton, or others who claim be leaders of the black community?  And there he was, a little known Senator named Barack Obama, who was getting some media attention.  The rise of Obama’s popularity didn’t impress me at all because I didn’t agree with his views for America, such as the redistribution of wealth, and his terrible record on murdering babies even if they’re born alive. The constant drumbeat from the black community to support Obama was the same old rhetoric I had witnessed before:  “Vote for Obama just because he’s black.”

That was when I realized I would be voting Republican for the first time.

On the night of November 4, 2008, I was in a hotel room watching the results of the presidential election.   When the announcement that Barack Obama would be the next president of the United States, and when I saw the celebrations happening because of it, I felt the same as I did on October 3, 1995 after the OJ verdict.  I wondered what so great about this victory, other than the color of Obama’s skin.

The Benghazi Report, What Did We Expect?